Greenland is divided into four municipalities – Kujalleq, Qaasuitsup, Qeqqata, and Sermersooq[1] – as well as the large Northeast Greenland National Park which is unincorporated. The Thule Air Base is administered by the United States Air Force and operates as an unincorporated enclave surrounded by territory of Qaasuitsup. 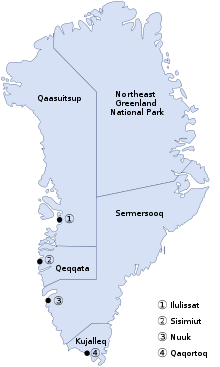 Administrative divisions of Greenland since 1 January 2009, with municipal centers marked with numbers.

In 1953 a new Danish constitution promoted Greenland to full membership in the Danish state with all of its inhabitants given Danish citizenship.

In 1908 Greenland was divided into 63 municipalities with elected municipal councils. After the modernization phase started in the 1950s these were consolidated and by 1979 there were 18 municipalities. 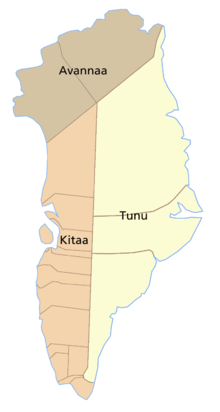 The three former counties of Greenland, including the boundaries of the former municipalities and the Northeast Greenland National Park area.