BuzzFeed is an American private Internet media company based in New York City. The firm describes itself as a "social news and entertainment company" with a focus on digital media and digital technology in order to provide "the most shareable breaking news, original reporting, entertainment, and video."[5] BuzzFeed was founded in 2006 as a viral lab, focusing on tracking viral content, by Jonah Peretti and John S. Johnson III.[6] Kenneth Lerer, co-founder and chairman of The Huffington Post, started as a co-founder and investor in BuzzFeed and is now the executive chairman as well.[6]

Prior to establishing BuzzFeed, Peretti experimented with other viral media as director of research and development and the OpenLab at Eyebeam, Johnson's New York City-based art and technology non-profit.[7][8] The company has grown into a global[9] media and technology company providing coverage on a variety of topics including politics, DIY, animals and business. In late 2011 Ben Smith of Politico was hired as Editor-in-Chief to expand the site into serious journalism, long-form journalism, and reportage.[10] 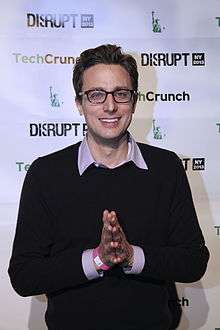 In August 2014, BuzzFeed raised $50 million from the venture capital firm Andreessen Horowitz, more than doubling previous rounds of funding.[11] The site was reportedly valued at around $850 million by Andreessen Horowitz.[11] BuzzFeed generates its advertising revenue through native advertising that matches its own editorial content, and does not rely on banner ads.[12] Buzzfeed also uses its familiarity with social media to target conventional advertising through other channels, like Facebook.[13]

In August 2015, NBCUniversal made a $200 million equity investment in Buzzfeed.[14] Along with plans to hire more journalists to build a more prominent "investigative" unit, BuzzFeed is hiring journalists around the world and plans to open outposts in India, Germany, Mexico and Japan.[15]

In October 2016, BuzzFeed raised $200 million from Comcast’s TV and movie arm NBCUniversal, at a valuation of roughly $1.7 billion.[17]

BuzzFeed's first acquisition was in 2012 when the company purchased Kingfish Labs, a startup founded by Rob Fishman, initially focused on optimizing Facebook ads.[18]

On October 28, 2014, BuzzFeed announced its next acquisition, taking hold of Torando Labs. The Torando team was to become BuzzFeed's first data engineering team.[19]

BuzzFeed produces daily content, in which the work of staff reporters, contributors, syndicated cartoon artists, and its community are featured. Popular formats on the website include lists, videos, and quizzes. While BuzzFeed was initially focused exclusively on such viral content, according to The New York Times, "it added more traditional content, building a track record for delivering breaking news and deeply reported articles" in the years up to 2014.[20] In that year, BuzzFeed deleted over 4000 early posts, "apparently because, as time passed, they looked stupider and stupider", as observed by The New Yorker.[21]

The most interesting thing to me, is that it traveled. It went from New York media circle-jerk Twitter to international. And you could see it in my Twitter notifications because people started having conversations in, like, Spanish and Portuguese and then Japanese and Chinese and Thai and Arabic. It was amazing to watch this move from a local thing to, like, a massive international phenomenon.[27]

A post about a debate over the color of an item of clothing from BuzzFeed's Tumblr editor Cates Holderness garnered more than 28 million views in one day, setting a record for most concurrent visitors to a BuzzFeed post.[28] Holderness had showed the picture to other members of the site's social media team, who immediately began arguing about the dress's colors among themselves. After creating a simple poll for users of the site, she left work and took the subway back to her Brooklyn home. When she got off the train and checked her phone, it was overwhelmed by the messages on various sites. "I couldn't open Twitter because it kept crashing. I thought somebody had died, maybe. I didn't know what was going on." Later in the evening the page set a new record at BuzzFeed for concurrent visitors, which would reach 673,000 at its peak.[27][29]

On April 8, 2016, BuzzFeed created a live stream on Facebook, during which two staffers wrapped rubber bands around a watermelon until the pressure of the rubber bands caused it to explode. The stunt was notable for drawing a very large online audience.[33]

On July 17, 2012, humor website McSweeney's Internet Tendency published a satirical piece entitled "Suggested BuzzFeed Articles",[34] prompting BuzzFeed to create many of the suggestions.[35][36][37][38] BuzzFeed listed McSweeney's as a "Community Contributor."[35] The post subsequently received more than 350,000 page views,[36] prompted BuzzFeed to ask for user submissions[35][39] and received media attention.[36][37][39][40][41][42][43][44][45][46] Subsequently, the website launched the "Community" section in May 2013 to enable users to submit content. Users are initially limited to publishing only one post per day, but can increase their submission capacity by raising their "Cat Power",[47] described on the BuzzFeed website as "an official measure of your rank in BuzzFeed's Community." A user's Cat Power increases as they achieve greater prominence on the site.[48]

BuzzFeed receives the majority of its traffic by creating content that is shared on social media websites. BuzzFeed works by judging their content on how viral it will become. Operating in a “continuous feedback loop” where all of its articles and videos are used as input for its sophisticated data operation.[13] The site continues to test and track their custom content with an in-house team of data scientists and external-facing “social dashboard.” Using an algorithm dubbed "Viral Rank" created by Jonah Peretti and Duncan Watts, the company uses this formula to let editors, users, and advertisers try lots of different ideas which maximizes distribution.[49] Staff writers are ranked by views on an internal leaderboard. In 2014, BuzzFeed received 75% of its views from links on social media outlets such as Pinterest, Twitter, and Facebook.[12][20]

BuzzFeed's video series on comfort food, "Tasty", is tailor made for Facebook, where it had over thirty million followers as of January 2016. The channel has substantially more views than BuzzFeed's dedicated food site.[50] At the end of every video, a male voice can be heard saying the catchphrase, "Oh yes!". The channel included three spinoff segments such as "Tasty Junior"--features meals the whole family can make, "Tasty Happy Hour"--featuring alcoholic beverages, and "Tasty Story"--featuring a celebrity making their own recipes and telling their stories about them. As of November 23, 2016, "Tasty" has released their own customizable cookbook.[51]

The company also operates the following international versions of "Tasty", each in their own respective languages:

Benny Johnson was fired from BuzzFeed in July 2014 for plagiarism.

BuzzFeed has been accused of plagiarizing original content from competitors throughout the online and offline press. On June 28, 2012, Gawker's Adrian Chen posted a story titled "BuzzFeed and the Plagiarism Problem". In the article, Chen observed that one of BuzzFeed's most popular writers – Matt Stopera – had frequently copied and pasted "chunks of text into lists without attribution."[52] On March 8, 2013, The Atlantic Wire also published an article concerning BuzzFeed and plagiarism.[53]

BuzzFeed has been the subject of multiple copyright infringement lawsuits for both using content it had no rights to and encouraging its proliferation without attributing its sources: one for an individual photographer's photograph,[54] and another for nine celebrity photographs from a single photography company.[55]

In July 2014, BuzzFeed writer Benny Johnson was accused of multiple instances of plagiarism.[56] Two anonymous Twitter users chronicled Johnson attributing work that was not his own, but "directly lift[ed] from other reporters, Wikipedia, and Yahoo! Answers," all without credit.[57] BuzzFeed editor Ben Smith initially defended Johnson, calling him a "deeply original writer".[58] Days later, Smith acknowledged that Johnson had plagiarized others' work 40 times, announced that Johnson had been fired, and apologized to BuzzFeed readers. "Plagiarism, much less copying unchecked facts from Wikipedia or other sources, is an act of disrespect to the reader," Smith said. "We are deeply embarrassed and sorry to have misled you."[58] In total, 41 instances of plagiarism were found and corrected.[59] Johnson, who had previously worked for the Mitt Romney 2008 Presidential campaign, was subsequently hired by the conservative magazine National Review as their social media editor.[60]

In October 2014, it was noted by the Pew Research Center that in the United States, BuzzFeed was viewed as an unreliable source by the majority of people, regardless of political affiliation. Other news outlets deemed more untrustworthy than trustworthy in the survey were The Rush Limbaugh Show, The Glenn Beck Program, Al Jazeera America and The Sean Hannity Show.[61][62][63]

In April 2015, BuzzFeed drew scrutiny after Gawker observed the publication had deleted two posts that criticized advertisers.[64] One of the posts criticized Dove soap (manufactured by Unilever), while another criticized Hasbro.[65] Both companies advertise with BuzzFeed. Ben Smith apologized in a memo to staff for his actions. "I blew it," Smith wrote. "Twice in the past couple of months, I've asked editors — over their better judgment and without any respect to our standards or process — to delete recently published posts from the site. Both involved the same thing: my overreaction to questions we've been wrestling with about the place of personal opinion pieces on our site. I reacted impulsively when I saw the posts and I was wrong to do that. We've reinstated both with a brief note."[66] Days later, one of the authors of the deleted posts, Arabelle Sicardi, resigned.[67] An internal review by the company found three additional posts deleted for being critical of products or advertisements (by Microsoft, Pepsi, and Unilever).[68]

In September 2015, The Christian Post wrote that a video by BuzzFeed titled I'm Christian But I'm Not... was getting criticism from conservative Christians for not specifically mentioning Christ or certain Biblical values.[69]

In 2016, the Advertising Standards Authority of the UK ruled that BuzzFeed broke the UK advertising rules for failing to make it clear that an article on "14 Laundry Fails We've All Experienced" that promoted Dylon was an online advertorial paid for by the brand.[70][71] Although the ASA agreed with BuzzFeed's defence that links to the piece from its homepage and search results clearly labelled the article as "sponsored content", this failed to take into account that many people may link to the story directly, ruling that the labelling "was not sufficient to make clear that the main content of the web page was an advertorial and that editorial content was therefore retained by the advertiser".[71][72]

In February 2016, Scaachi Koul, a Senior Writer for BuzzFeed Canada tweeted a request for pitches stating that BuzzFeed was "...looking for mostly non-white non-men" followed by "If you are a white man upset that we are looking mostly for non-white non-men I don't care about you go write for Maclean's." When confronted, she followed with the tweet "White men are still permitted to pitch, I will read it, I will consider it. I'm just less interested because, ugh, men." In response to the tweets, Koul received numerous rape and death threats and racist insults.[73][74] Sarmishta Subramanian, a former colleague of Koul's writing for Maclean's condemned the reaction to the tweets, and commented that Koul's request for diversity was appropriate. Subramanian said that her provocative approach raised concerns of tokenism that might hamper BuzzFeed's stated goals.[75]