Ayyanar (also spelt Aiyyanar, Ayanar or Iyenar) is a Hindu village god of Tamil Nadu also worshipped by Sri Lankan Tamils. He is primarily worshipped as a guardian deity who protects the rural villages. Most officiating priests are derive from local potter community, but other caste members also officiate in his temples.[1] The temples of Aiyanar are usually flanked by gigantic and colorful statues of him and his companions riding horses or elephants. There are number of theories as to the origins of the deity as well as the etymology of the name. He is associated with the god Ayyanayake by the Sinhalese people of Sri Lanka.

Etymology and other names 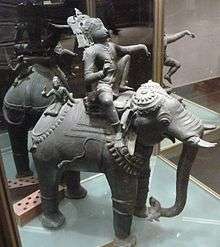 The Tamil word Ayyānar is derived from the root word Aiyā which is a title often used by Tamils, Malayalis and Telugus to designate respectable people. There are number of conflicting etymologies for the word Aiyā, generally it is thought to be derived from proto-Dravidian term denoting an elder brother. It is used in that meaning in Tamil, Telugu and Malayalam.[2] Others derive the word Aiyā as a Prakrit version of the Sanskrit word Ārya.[3] According to Fred Clothey, Aiyanar is a Tamil adaptation of Aiyan, the chief deity of Ay chieftains who ruled parts of Kerala adjoining Tamil Nadu when both areas were collectively known as Tamilaham. He also states that the term Aiyar meaning a cow herder and a protector is an appropriate appellation for both the Ay chieftains and their deity.[3]

Another name for the deity is Ayyānar-Śāstā or Śāstā.[4] Śāstā is a generic Sanskrit term for a teacher. In South India, Śāstā became deified in the ninth century. The Śāstā cult is particularly well developed in the state of Kerala, where independent temples to Śāstā are known from the 10th century. Prior to that, Śāstā veneration was within Shiva and Vishnu temples who are the premier gods of the Hindu pantheon. Śāstā is also used to describe number of other deities. Brahma-Śāstā is another name for Murugan and Dharma-Śāstā is used to describe Ayyappan. Śāstā also has a sanskritising legend that makes him the son of a union between Shiva and the female form of Vishnu.[3] Other names of Aiyanar include Gajavahana and Sātavāhana.[5]

The earliest reference to Aiyanar includes two or more hero stones to hunting chiefs from Arcot, Tamil Nadu. The hero stones are dated to the 3rd century C.E. It reads "Ayanappa; a shrine to Cattan." This is followed by another inscription in Uraiyur near Tiruchirappalli which is dated to the fourth century.[6]

Literary references to Aiyanar-Cattan is found in the Silappatikaram, a Tamil Jain work dated to the 4th to 5th century C.E.[5] From the Chola period (9th century) onwards the popularity of Aiyanar became even more pronounced.[4]

An Aiyanar is usually represented either as a warrior on foot; or riding a white horse or elephant. He is also represented as seated between his two wives, carrying a sceptre or whip and wearing a meditation band, a cloth girdle circling the back and supporting the knees of a seated person, from the Sanskrit Yogapaţţa or Tamil Vāgupaţţai.[7]

Aiyanar is often represented with an escort, usually composed of the god's vassals, sometimes comprising demons. Consistent with this practice, terracotta horses are usually placed outside the temple. These are given up to the god as steeds for his night time perambulations. The attendant priest for the Aiyanar is generally the potter who fashions idols and clay horses and is a non vegetarian.[7]

Ayyanar or Sathanar worship is a very ancient ancestral clan-based worship system linked to nature and fertility worship. The festivals of Ayyanars are celebrated in Sacred Groves during spring season by all the related clan. Ayyanar shrines are usually located at the peripheries or boundaries of rural villages and the deity is seen riding a horse with a sword. Weapons such as a trident or a lance are also associated with the shrine. Most officiating priests are of Tamil vellar and derive from local lineages that had initiated the cult centers generations ago.[8]

The worship pattern is agamic. The Agamas are non-vedic in origin [9] and have been dated either as post-vedic texts [10] or as pre-vedic compositions.[11] and is associated with sacrificial offerings of vegetarian food. However animals such as chicken and goats are offered to few of the selected 21 associate deities (Kaval deivangal) such as Karuppa samy, Sudalai Maadan samy and some other Amman deities located within Ayyanar temple for favors. In return the local priest might offer holy flowers or Veeputhi (holy ash) to the worshippers. Folk Tales like Koothhu and Folk arts like Villupattu are enacted to bring out the message of the Ayyanar folk story to one and all.

In Tamil Nadu, Aiyanar God worshipped in open grounds surrounded by trees holds an important position in the local villages because of the values installed in family and community life. Aiyanar System is the base for forming large family clan associations and maintaining family values in rural areas.

Aiyanar worship represents a non-Vedic form of worship. Often community life and family values are valued than individualist life mode. So a large number of gods at least 61 divine servant agents are present along with at least 18 to 21 associate deities. A family life or community life can be smooth and happy only if there is place to accept and accommodate every kind of people. Aiyanar is often pictured riding an elephant, horse, bull or tiger fighting against demons and evil gods that are threatening the village. The temple priests are often from the Velar caste; the potters of Tamil Nadu or within that particular community clan group which forms a large group of family associations. They inherit their role as priest from male family members, and it is not unusual that as many as eight family members hold the same position who often act in the role of Kodangi for solving local issues.

An Aiyanar temple, various clay figure and idols reflects the social hierarchy which exists in the villages of Tamil Nadu. The gods are ranked according to the social and economical hierarchy in the village, and as in social life, the highest ranking gods are vegetarian, whereas the lower ranking ones are non-vegetarian. A temple is often not a building, but one or more figures giving importance to each and every ancestral local god who are collections of people belonging to various community groups.

There are many kinds of festivities in connection with village temple festivals. At the temple for Conai (Sonai), one of the lesser deities associated with Aiyanar, a bull is brought in front of the temple. It is decorated with flowers and painted. A rope made of wet hay is now tied to the bull, and some of the men challenge the bull to chase them.