This article is about the Syrian football team. For other uses, see Al-Ittihad (disambiguation).

Al-Ittihad Sports Club of Aleppo (Arabic: نادي الاتحاد الرياضي الحلبي‎‎) is a professional multi-sports club based in the Syrian city of Aleppo mostly known for its football team which competes in the Syrian Premier League, the top league of Syrian football. Being one of the most successful clubs in Syrian football history, Al-Ittihad won six Syrian football league titles and nine Syrian cups. In Asia, their best performance was in 2010 when they became champions of AFC Cup competition.

The club was founded in 1949 and received its license in 1953. They play their home games at the Aleppo International Stadium since its inauguration in 2008. The club have their own ground; Al-Ittihad Stadium with a capacity of 16,000 spectators.

Al-Ittihad are also known for their basketball team. In general, 20 types of sports are being practiced by the club.

The club was founded on 20 January 1949 under the name Halab Al-Ahli Club, by the merge of three smaller football teams in Aleppo: Al-Janah (The Wing), Osud Al-Shahba (Lions of Shahba) and Al-Nejmeh (The Star), before getting recognized officially by the ministry of internal affairs on 24 September 1953. In 1972, the name of the club was changed to Al-Ittihad Aleppo by the decision of the Syrian government.[1]

Prior to the foundation of the Syrian official football league, the club have competed in various regional competitions in the Aleppo Governorate such as the regional league of Aleppo and the Aleppo Municipality Shield (Arabic: درع بلدية حلب‎‎).

The club have participated in the first ever Syrian football league in 1966–67 when they became champions. Since then, they have never relegated to the bottom level.

Al-Ittihad's original home ground since the early 1950s was the Aleppo Municipal Stadium which is considered one of the most historic stadiums in Syria. At the beginning of the 1990s the club moved to the newly built Al-Hamadaniah Stadium. After the inauguration of the Aleppo International Stadium in 2008, the club decided to play their home games at the Syrian league and AFC competitions in the modern stadium which can host around 75,000 spectators. Al-Hamadaniah Stadium is still used as an alternative venue. 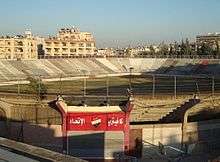 The training grounds of al-Ittihad are located in the al-Shahbaa district of Aleppo. The complex is home to the al-Ittihad Stadium with a capacity of 10,000 spectators, a nearby indoor training pitch and many other small pitches. There are also two basketball courts, an outdoor swimming pool, a restaurant, conference rooms and offices.

Since its foundation, the traditional colour of Al-Ittihad's home kit is red with various designs over the years. Therefore, the club is nicknamed The Red Castle by the fans as a reference to the city's main landmark; the Citadel of Aleppo. The away kit may vary between a full white kit and a white kit with red stripes on the shirt.

Administrative Board of Al-Ittihad Aleppo Club:

For all former Al-Ittihad players with a Wikipedia article see Category:Al-Ittihad Aleppo players.