Dempo Sports Club is a football club based in Panjim, Goa. The club is owned and sponsored by the Dempo group of companies. Popularly known as ‘the whites’, the team has been a constant participator in all the national football championship and gained immense popularity in the last four decades of its existence.[2]

The team has won several accolades and honors. In the 2004–05 season, the club won its maiden National Football League title. They won the league again in the 2006–2007 season and followed it with the three I-League triumphs in 2007–08 in its inaugural version and then in 2009–2010 and again in 2011–12, making them the most successful club on national front with 5 league titles more than any other club in India.[3]

Dempo Sports Club started out as Dempo Souza Football Club in 1961 and was taken over when they made the company their own Dempo Corporation around that time.[4] The club was started by Michael deSouza and the logo and colours that the club wears currently was what he had chosen for the team. The club won their first Goan Senior League title in 1972. The club then won their first ever national pan-India tournament in 1975 by winning the Rovers Cup. The club then won the Rovers Cup again in 1978.[4] The club defended their title one year later in 1979. Their first double.

The club then won their first international cup in Malé against New Radiant SC. The club then won the Rovers Cup again by beating Mohun Bagan again and were then one of the original 12 teams in the first National Football League in 1996.[5] The club then go relegated in 1999–2000 but got promoted the very next season and then the club won their first NFL championship in 2004.[4] Dempo also won the last NFL Season. Dempo then won the first I-League season in 2007–08.As a result of this title win, Dempo played in AFC competition in 2008 during the 2008 AFC Cup, Dempo ended as semi-finalist. They again won the league in 2009–10 and 2011–12. After the 2012–13 season where Dempo finished in 5th place, they parted ways with their most successful coach Armando Colaco with whom they had won 5 League titles.They appointed Arthur Papas who had previously been the Head Coach of the Indian U23 Men's National Team.[6] Dempo finished their 2013–14 campaign with a 4th-place finish.[7]

In March, 2015 after losing their final match to fellow Goan and relegation struggling club Salgaocar 2–0 they got relegated for the first time from I-league

The official colours of Dempo Sports Club are Blue and White. Ever since their creation Dempo's home colours have always involved blue, mainly with the shirts while the shorts were always either blue or black. The away colours were always all white but then in 2011 when Dempo unveiled their away kit the shirt had black stripes on it. The shorts however remain the same. 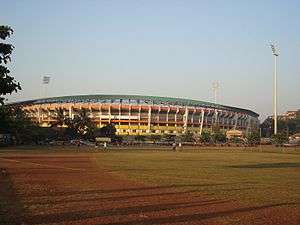 At the moment Dempo Sports Club's main sponsor and owner is Dempo Mining Corporation Limited. The club has been owned by Dempo since their creation. As part of the sponsorship from Dempo the club also named itself Dempo Sports Club and is classed as an institutional club in that case.

The finances given to the club are very limited which meant that the club was forced to spend less on infrastructure and proven players and spend more on local youth development.

The club hired their first professional manager in 2000, Armando Colaco, he remained with the club until the end of Season 2012/13. In June 2013, the club signed Greek-Australian Manager Arthur Papas who was already working in India as the Indian U23 National Team Coach.

Only competitive matches are counted. Wins, losses and draws are results at the final whistle; the results of penalty shoot-outs are not counted.