Buriram United Football Club (Thai: สโมสรฟุตบอลบุรีรัมย์ ยูไนเต็ด) is a professional football club based in Buriram, Thailand. The club has played at the top level of Thai football for the majority of their existence and is currently competing in the Thai League. The club was founded in 1970 and their current home stadium is New I-Mobile Stadium which has a capacity of 32,600.[1]

Buriram United won their first Thai Premier League title in 2008 and the Kor Royal Cup in 1998, as PEA FC (Provincial Electricity Authority Football Club). The club was previously based in Ayutthaya before moving east to Buriram for the 2010 season. In season 2011, Buriram PEA were the triple champions winning the (2011 Thai Premier League, 2011 Thai FA Cup, and 2011 Thai League Cup) in Thailand.[2]

The club was founded in 1970. But first successes came in 1998 with winning the third division of the Kor Royal Cup. The club was then in the Thai Division 1 League. 2002–03 the club finished third in the second division. In the Thai Premier League Relegation to be lost at the end of the Thailand Tobacco Monopoly FC after round match with 0–1. A year later, with space, then succeeded in the end of season 2003–04 promotion to the Thai Premier League.PEA surprised everyone by becoming the league runner-up at the end of their first Premier League season. Being the runner-up entitled the club to participate in the AFC Champions League. It was the first participation in an international competition for the club. However the club was excluded from the competition.[3] In the following two seasons, 2006 and 2007, the PEA took place only 10 and 8 at the end of the season.

In 2008 Provincial Electricity Authority won their first championship in Thai League after they changed their home stadium from Bangkok to Ayutthaya, where they have a bigger fan base.

In December 2009 it was announced that a politician based in Buriram, Newin Chidchob was to take over the club. He had already tried unsuccessfully to take over TOT SC and Royal Thai Army FC[4] Newin moved the club to Buriram and gave it the name Buriram PEA Football Club. Pongphan Wongsuwan was instated as coach. Since 1998 he had been the coach of FC TOT.

Buriram United has Muangthong United as their main rival. The two clubs emerged as the new powerhouses of Thai League (TL) in the last 6 years. Since the beginning of 2011, when the team name was changed to Buriram United and they moved into the new i-Mobile Stadium, Buriram United has compiled the best overall record of all teams in the PLT, winning 3 of the last 4 PLT championships.

Another Buriram's main rivals is Chonburi FC due to a close head-to-head statistic. 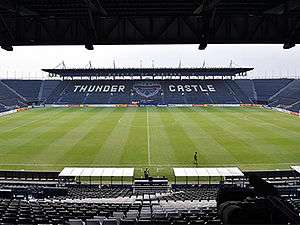 I-Mobile Stadium is a 32,600 seat football stadium in Buriram, Thailand.[8] The stadium is the home of Thailand's 2011, 2013 and 2015 treble champions, Buriram United. The i-mobile Stadium is the second largest football stadium in Thailand. Its nickname is "Thunder Castle", the fifth castle of Buriram Province. Buriram United has led the 18-team Thai League (TL) in attendance since the move to the new stadium.

The i-mobile Stadium is in the Mueang Buriram District, located about 4 kilometers southwest of central Buriram along highway 219. The 150-acre site has a capacity of 32,600 people with parking for 800 cars and buses, plus 3,000 motorcycles. The pitch is floodlit; allowing for night matches. The stadium houses locker rooms for home and visiting teams, provides modern medical facilities and live television and radio broadcasting infrastructure.

Below is a list of players playing for Buriram United as the official website confirms.[10] Note: Flags indicate national team as defined under FIFA eligibility rules. Players may hold more than one non-FIFA nationality.

Note 1: The club lists the supporters as the 12th man. Note 2: Players who are AFC Champions League quota foreign players are listed in bold.

The following are the sponsors of BRUTD (named "BRUTD Partners"):