Arakkonam is a Lok Sabha (Parliament of India) constituency in Tamil Nadu. 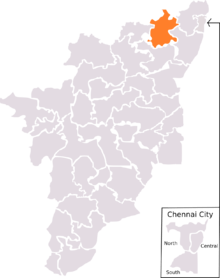 Note: The incumbent party Dravida Munnetra Kazhagam did not contest this seat in 2004. Instead it was contested by its United Progressive Alliance (UPA) coalition partner Pattali Makkal Katchi (PMK), who won the seat. Thus, the UPA held the seat. PMK had not contested this seat in the previous 1999 elections.