The results of the elections were declared on 16 May 2014.

As the term of 15th Lok Sabha ended in May 2014, Election Commission of India decided to conduct the election for the next Lok Sabha in April–May 2014.

Dravida Munnetra Kazhagam (DMK) under M. Karunanidhi was part of both (United Progressive Alliance) UPA government until it withdrew support on 19 March 2013 over Sri Lanka issues.[4] DMK suspended their south zone organisational secretary M. K. Alagiri for violating party discipline and later expelled him from the party in March 2014.[5][6]

In the Indian National Congress (INC), shipping minister G. K. Vasan[10] and finance minister P. Chidambaram were opt out from the election.[11]

The election process are carried out by the state election commission headed by Praveen Kumar and for the first time, Section 144 of CrPC used in the election for 36 hours before polling to prevent cash distribution to bribe voters.[12] As of 23 April, commission seized 390 million (390 million) of money in the state.[13]

In the beginning of the year, AIADMK leader Jayalalithaa stated that she will campaign and win all 39 seats by allying with left parties. AIADMK party members declared herself as the Prime Minister candidate despite rumours that she might support Narendra Modi.[14] On 24 February, Jayalalitha announced candidates for all the 39 constituencies of Tamil Nadu.[15] 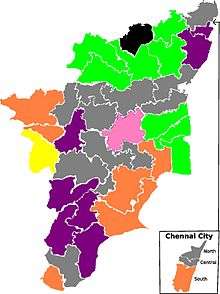 The BJP under PM candidate Narendra Modi have formed an alliance with MDMK, PMK, DMDK, IJK, KMDK and seats were allotted on 20 March 2014.[16]

The INC under the leadership of Rahul Gandhi stated that they will decide on a PM candidate after the election. They lost their major ally from UPA 1 and 2 administration DMK last year. They decided to contest alone, to all 39 seats in the state.[18]

U. Vasuki campaigning in North Chennai