The Qatar national football team is the national team of Qatar and is overseen by the Qatar Football Association. The team has appeared in nine Asian Cup tournaments and Qatar also hosted the 2011 Asian Cup. They play their home games at Khalifa International Stadium and Jassim Bin Hamad Stadium. The latter is the home stadium for the team.[2]

Football was brought to Qatar during a time which coincided with initial discovery of oil reserves in Dukhan in 1940.[3] By 1948, expatriate oil workers played the first official football match in Qatar. The Qatar Football Association was formed in 1960, and the QFA joined FIFA in 1970.[4] Simultaneously during this period, the Bahrain Football Association were drawing up plans for the establishment of a regional football competition within the GCC and Qatari officials were involved with the corroboration of this proposal.[5] The plans came to fruition and in March 1970 the Gulf Cup of Nations was inaugurated.

The Qatar national team played its first official match on March 27, 1970 against hosts Bahrain, losing 1–2 as Mubarak Faraj scored the sole goal for Qatar.[6] The newly formed Qatar national team posted underwhelming results in the first Gulf Cup tournament, coming in last place with a single point, with the highlight of their tournament being a 1–1 draw with the Saudis in their final match.[7]

In the next edition of the Gulf Cup in 1972, Qatar was again relegated to last place after suffering 3 straight defeats.[8] The next tournament in 1974 proved to be somewhat of a break-through for the Qataris as they achieved their first triumph in international football with a 4–0 victory over Oman. The Qataris lost out to Saudi Arabia in the semi-finals, but achieved a 3rd place standing after emerging the victors of a penalty shoot-out against UAE.[9]

The first time they entered the qualifying stages for the AFC Asian Cup was in 1975. They were not successful in qualifying for the 1976 AFC Asian Cup, with Iraq and Saudi Arabia booking the group's two qualifying berths. Despite this setback, Qatar finished in 3rd place in the 4th Gulf Cup as the host nation the next year.[10]

The national team played its first FIFA World Cup qualifying match in 1977. Qatar was set to play UAE on 11 March 1977, but the last minute withdrawal of the UAE from the competition merely postponed Qatar's debut until two days later when Bahrain were defeated 2–0 in Doha.[11]

Their Asian Cup debut came in 1980 under legendary head coach Evaristo de Macedo. They had qualified for the tournament after topping a relatively easy group composing of Bangladesh and Afghanistan. Their showing in the main tournament was unimpressive, making an early exit from the group stages with two defeats, one draw and one win.[12]

Qatar narrowly lost to Iraq in the finals of the 1984 Gulf Cup of Nations; nonetheless they were named runners-up, their most impressive accolade until 1992.[13]

They failed to make it out of the preliminary stages of the 1982 and 1986 World Cup qualifying rounds. However, the team qualified for both the 1984 and 1988 editions of the Asian Cup. They fell short of qualifying for the semi-finals of the 1984 tournament, with Saudi Arabia's Mohaisen Al-Jam'an's 88th-minute goal against Kuwait ensuring a semi-final position for both teams. They also missed out on a semi-final place in 1988; however, they notably defeated Japan by a score of 3–0.[14]

Qatar arguably reached its peak in the 1990s, attaining its highest-ever FIFA rating (53) in August 1993.[15] Qatar started off with an emphatic qualifying campaign for the 1990 World Cup, finishing at the top of their group. They were denied a spot in the World Cup after finishing below UAE and South Korea in the final round of qualifying.

In 1990, the national team once again finished runners-up in the Gulf Cup as Kuwait won the final two matches of the tournament.[16] Two years later, they won the competition on home soil for the first time under the leadership of Sebastião Lapola, despite a 1–0 loss against Saudi Arabia in their final game.[17] They were also named runners-up in the 1996 Gulf Cup.

Qatar reached the Asian Zone's final qualifying round for France 1998. After wins against China and Iran, they played their last match against Saudi Arabia, needing just a point to gain an automatic qualifying place. However, they lost out as the Saudis went through 1–0.

They made it to the quarter-finals of the 2000 Asian Cup despite finishing 3rd in their group, but lost to China in their quarter-final confrontation.[19]

They reached the final qualifying round again in 2001, but were defeated by Bora Milutinovic's China team, who topped the section to progress to their first FIFA World Cup. Frenchman Philippe Troussier took the manager's job after Korea–Japan 2002, but was unsuccessful in both the 2004 Asian Cup and the qualifying campaign for Germany 2006.

Troussier was sacked after the World Cup qualifying campaign, and under Bosnian Džemaludin Mušović the team won the Gulf Cup in 2004 and the Asian Games gold in 2006. Mušović stepped down after Qatar only earned two points from three matches in the 2007 Asian Cup.

The job of coaching the team in qualifying for the 2010 World Cup fell to Jorge Fossati, who led the team throughout the first and second AFC rounds up to the third round. After leaving them at the top of their group with only two played matches, Fossati had to undergo stomach surgery. Subsequently, the Qatar Football Association ended their co-operation with him in September 2008, as the QFA claimed he needed too long to recover from surgery.[20] Bruno Metsu was called up for the job, but Qatar failed to qualify after finishing fourth in their qualifying group. 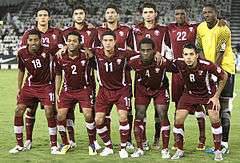 In 2011, as hosts of the 2011 Asian Cup, they advanced to the quarter-finals. They succumbed to a late 2–3 defeat to eventual champions Japan after a goal was scored by Masahiko Inoha in the 89th minute.

Also as hosts, they went on to win the 2014 WAFF Championship after defeating Jordan 2–0 in the final. The competition was made up primarily of youth and reserve teams, of which Qatar's was the latter.[22] Djamel Belmadi, the head coach of the B team, replaced Fahad Thani as the head coach of the senior team as a result of the team's positive performances. 10 months later, Djamel Belmadi led Qatar to gold in the 2014 Gulf Cup. They advanced from the group stages after 3 draws, going on to defeat Oman 3–1 in the semi-final, and were victorious in the final against Saudi Arabia, who were playing in front of a home crowd, by a margin of 2–1.[23]

Despite winning the Gulf Cup and finished the 2014 year with only one defeat, Qatar showed a poor form in 2015 AFC Asian Cup. Qatar was defeated 1–4 by United Arab Emirates in their opener. This was continued with a 0–1 loss to Iran and 1–2 to Bahrain. Qatar eliminated in the group stages with no points and placed 4th in Group C.

However, Qatar's campaign in qualifying for the 2018 FIFA World Cup in Russia had been more successful. They have qualified to the third round in the AFC region, with 7 wins and only lost 1, on the hand of China at the last match when Qatar had surely participated in the Third Round. But ultimately, Qatar's defeat on the hand of China, had started a poor performance of the team. After two matches in the last round, Qatar lost all two matches on the hand of Iran and Uzbekistan without scoring a single goal.

The Gulf Cup of Nations has been played on a bi-annual basis since 1970. The tournament has changed since the first edition from a round-robin basis to a knockout tournament in the latter years. Notably, the 2000 edition was cancelled and the 2003 and 2010 were moved due to congested fixture lists with other tournaments, such as the Asian Cup.

The following are Qatar's results in the last 21 months and upcoming fixtures.

The following players have been called up for the Qatar squad within the last 12 months. 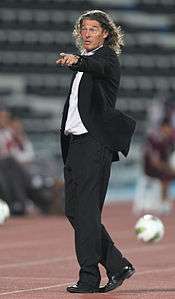