Desert climate (in the Köppen climate classification BWh and BWk, sometimes also BWn), also known as an arid climate, is a climate that does not meet the criteria to be classified as a polar climate, and in which precipitation is too low to sustain any vegetation at all, or at most a very scanty shrub.

An area that features this climate usually experiences from 25 to 200 mm (7.87 inches) per year of precipitation[1] and in some years may experience no precipitation at all. Averages may be even less such as in Arica, Chile, where precipitation normals annually stand at around 1 mm per year. In some instances, an area may experience more than 200 mm of precipitation annually, but is considered a desert climate because the region loses more water via evapotranspiration than falls as precipitation (Tucson, Arizona and Alice Springs, Northern Territory are examples of this).

Hot desert climates (BWh) are typically found under the subtropical ridge where there is largely unbroken sunshine for the whole year due to the stable descending air and high pressure aloft. These areas are located between 30 degrees south and 30 degrees north latitude, under the subtropical latitudes called the horse latitudes. Hot desert climates are generally hot, sunny and dry year-round. They rise at a higher latitude in south-western United States in the sheltered regions warmed up in winters by the Pacific Ocean, enabling searing summer temperatures in the Death Valley basin at 36 degrees latitude. Hot desert climates also reach similar latitudes in the Middle East, North Africa and coastal south eastern areas of Spain.

Hot desert climates usually feature hot, sometimes exceptionally hot, periods of the year. But some places like Teniriffe feature warm summers but not that hot but are still classed as hot desert climates.[3] In many locations featuring a hot desert climate, maximum temperatures of over 40 °C (104 °F) are not uncommon in summer and can soar to over 45 °C (113 °F) in the hottest regions. The world absolute heat records are generally in the hot deserts, where the heat potential is the highest on the planet. Some desert locations consistently experience very high temperatures all year long, even during wintertime. These locations feature some of the highest annual average temperatures recorded on Earth, averages which can exceed 30 °C (86 °F). This last feature is seen in some parts of deserts of Africa and Arabia. During colder periods of the year, night-time temperatures can drop to freezing or below due to the exceptional radiation loss under the clear skies. However, very rarely do temperatures drop far below freezing.

A cold desert climate is typically found in temperate zones, almost always in the rain shadow of high mountains which restrict precipitation from the westerly winds, or in the case of Central Asia, from the monsoon. The Gobi desert in Mongolia is a classic example of a region with a cold desert climate. Though hot in summer, it shares the very cold winters of the rest of Central Asia. The Kyzyl Kum and Taklamakan deserts of Central Asia and the drier portions of the Great Basin Desert of the western United States are other major examples of BWk climates. The Ladakh region, lying in the Great Himalayas in India, also has a cold desert climate. This is also found in Europe, primarily in the Tabernas Desert in Almería, Spain. [4]

Arctic and Antarctic regions also receive very little precipitation during the year, owing to the exceptionally cold dry air, however, both of them are generally classified as having polar climates.

A dusting of snow in the Atacama Desert.[5]

Mild desert climates are characterised by more moderate temperatures than encountered elsewhere at comparable latitudes (usually due to the nearby presence of cold ocean currents) and, in the case of coastal mild deserts, frequent fog and low clouds, despite the fact that these places can rank among the driest on Earth in terms of actual precipitation received. Temperatures are mild throughout the year, usually not subject to any of the temperature extremes typically found in desert climates. Some publications do not have a "mild desert" category; in these documents mild desert climates are sorted into either the hot desert or cold desert classifications. 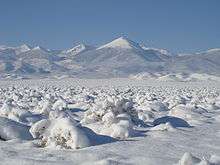 Cold deserts do get the occasional blanket of snow, such as Snake Valley, Utah and Nevada

As stated previously, there are three isotherms used to delineate between hot and cold desert climates. As a result of this, some areas can have climates that are classified as hot or cold depending on the isotherm used. However the 18 °C isotherm is the most accurate and most used isotherm as it reflects on all the months temperatures not just one months temperature.