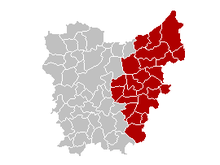 The Administrative Arrondissement of Dendermonde consists of the following municipalities:

This article is issued from Wikipedia - version of the 11/27/2015. The text is available under the Creative Commons Attribution/Share Alike but additional terms may apply for the media files.