Sint-Niklaas ([ˌsɪnt nɪˈklaːs]) (French: Saint-Nicolas) is a Belgian city and municipality located in the Flemish province of East Flanders. The municipality comprises the city of Sint-Niklaas proper and the towns of Belsele, Nieuwkerken-Waas, and Sinaai.

Sint-Niklaas is the capital and major city of the Waasland region straddling the East Flanders and Antwerp provinces. The city is known for having the largest market square in Belgium. At one point this square also boasted the largest Christmas tree, and the largest easter egg in Europe.

Although some traces of pre-Roman activity have been found on the territory of Sint-Niklaas, the regional centre during Roman times was neighbouring Waasmunster, better located on the river Durme. Belsele was already mentioned in a 9th-century document. The history of Sint-Niklaas proper, however, starts in 1217, when the bishop of Tournai, following advice from the local clergy, founded a church to Saint Nicholas here. The new parish was to depend on the See of Tournai until the middle of the 16th century. Politically, however, it was part of the County of Flanders. The power of Flanders at that time favoured the quick economic development of the city, which became the administrative centre of the region in 1241. A document dated from 1248 records that Margaret II, Countess of Flanders, ceded additional territory to the parish of Sint-Niklaas with the proviso that it would remain bare, which explains the unusual size of the central market square today.

The city was never walled, which made it an easy target for conquest. In 1381, it was engulfed by fire and plundered. However, the central location of Sint-Niklaas between Ghent and Antwerp, not far from the Scheldt, favoured further development. By 1513, Emperor Maximilian had granted the city the right to hold a weekly market. Around 1580, the church of Saint Nicholas suffered heavy damage from roving iconoclasts. The 17th century was generally a period of prosperity that was marked by economic growth, mostly in the flax and wool industries. This was also the time when Sint-Niklaas was endowed with administrative buildings and three cloistered communities (Oratorians, Franciscans, and Black Sisters), which provided educational, religious, and medical services to the region. On May 25, 1690, another fire destroyed most of the city.

In the 18th century, the Austrian regime was favourable to Sint-Niklaas. The flagship textile industry adapted well to mechanization and added cotton products to its portfolio in 1764. At the end of the century, the French Revolution brought its mixture of religious intolerance and modern administration to the city. Napoleon came to visit Sint-Niklaas in 1803 and officially promoted it to the rank of city. The 19th century witnessed a general decline in the textile industry. Several new buildings were erected, including the current city hall and the Onze-Lieve-Vrouwekerk (Church of Our-Lady). After World War II, the textile industry went through a crisis. Today, the historic centre of the city has become mostly a shopping and services district.

The Tour of Flanders (Flemish, Ronde van Vlaanderen ) bicycle road race moved its start to the market square at Sint-Niklaas from Ghent in 1977, mainly because the great square provided close proximity for the growing number of spectators. By 1988 the start had grown into a two-day affair with a spectacle presented by BRT television the previous night. Since 1998 the start of the race has taken place in Brugge. 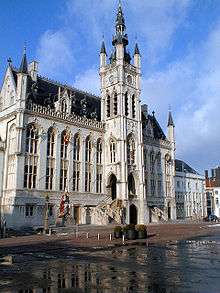 Church of Our Lady

Because of its location on the vital axis from Ghent to Antwerp, Sint-Niklaas has excellent connections by train and car. The E17, one of Belgium's busiest highways, passes the city; the N16 dual carriageway leads to Mechelen and Brussels.

Trains depart every half-hour to Ghent and Antwerp and hourly to Brussels, Mechelen and Leuven from the new railway station. The city also has an extensive network of buslines, both regional and local. Throughout the city's main thoroughfares, buses drive in designated lanes.

Sint-Niklaas was awarded the title of Most Pedestrian Friendly City in Flanders after the restoration of its central Market area.

Mayors since the end of World War II:

Sint-Niklaas is twinned with: