The lead-up to these Paralympics were met with concerns regarding Russia's recent military intervention in the nearby Crimean peninsula of Ukraine, which led to both the United Kingdom and United States choosing not to send governmental delegations to the Games, and British government officials intending to publicly boycott the games. While the IPC monitored the situation throughout the Games, these concerns did not affect the participation of athletes from these countries—although, the head of Ukraine's NPC threatened to pull its athletes from the Games if the situation escalated, and members of the Ukrainian team staged symbolic protests of the crisis throughout the Games.

With 80 medals, 30 of them being gold, the host country of Russia won the most medals during these Games, and set a record for the most medals won by a single country during a single Winter Paralympic Games. Additionally, Russian skier Roman Petushkov won the most individual gold medals in Winter Paralympic history, with six golds across skiing and biathlon events.[2][3] However, following the Games, the IPC discovered evidence that Russia's performance may have been aided by a wider state-sponsored doping program. 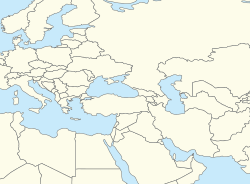 Sochi
Location of Sochi on the eastern coast of the Black Sea.
Main article: Venues of the 2014 Winter Olympics and Paralympics

As with previous Paralympics, the 2014 Winter Paralympics used most of the same venues that were used by the Olympics, situated within the Sochi Olympic Park and the resort of Krasnaya Polyana.[1] Despite the IPC believing that Russia had "zero track record in terms of accessibility"—given that the Soviet Union passed on hosting the 1980 Summer Paralympics after claiming no disabled athletes lived in Russia, the venues were built to the IPC's standards, organizers were quick to fix some of the issues pointed out by officials during an audit of the venues in January 2014, and an IPC spokesperson stated that they were "confident and expect everything to be ready for Games time." Organizers and the IPC hoped that the Paralympics' legacy would make Sochi a role model for inclusive design throughout the country, and IPC president Philip Craven went as far as dubbing Sochi the first accessible city in Russia, commending the country's changed stance on disability since 1980.[6][7]

The Sochi Olympic Park was built by the Black Sea coast in the Imeretin Valley, about 4 km (2.5 miles) from Russia's border with Abkhazia.[8][9] The venues are clustered around a central water basin with a synchronized fountain, allowing all indoor venues to be within walking distance.[10][11] Off these, the venues used during the Paralympics included: 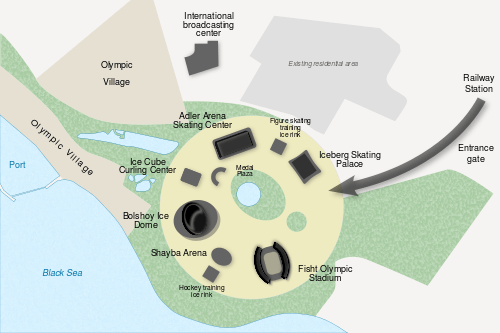 A sketch of the layout of Sochi Olympic Park. 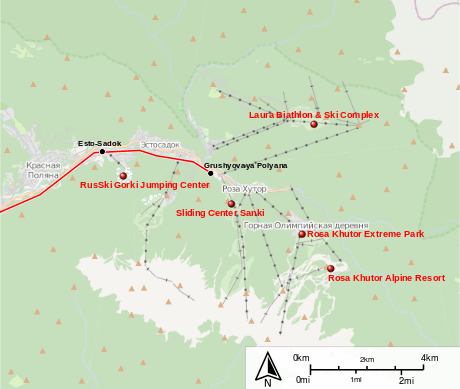 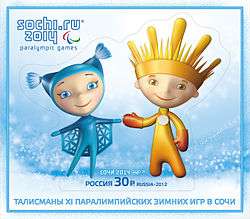 A shortlist of 10 Olympic and 3 Paralympic designs were shown to the public on 7 February 2011, while the winners were revealed on 26 February 2011.[12] The Paralympic mascots, Ray of Light and Snowflake, represented contrasts and inclusivity: their fictional backstories portrayed them as having respectively come to Earth from a hot planet and a cold comet. After Ray of Light overcame his struggle to adapt to a winter environment, he bonded with Snowflake through a shared passion for winter sports.[13]

The opening ceremony of the Games were held at Fisht Olympic Stadium on 7 March 2014. Entitled "Breaking the Ice", the ceremony was themed around equality and "breaking" barriers, featuring ballet sequences set to music by notable Russian composers, and animated segments by Aleksandr Petrov based on the story of the firebird. During the parade of nations, Ukraine's athletes declined to participate in protest of the situation in Crimea, and was represented solely by its flagbearer Mykailo Tkachenko. In his opening speech, IPC president Philip Craven praised Russia for finally fulfilling its "dream" of hosting the Paralympics after previously passing on the opportunity in 1980. He called upon spectators to have a "barrier-free mind", stating that "the sport you witness here will change you. Not just for now, but forever." The Paralympic cauldron was jointly lit by Russian Paralympians Olesya Vladykina and Sergey Shilov.[14][15]

Athletes representing forty-five National Paralympic Committees (NPCs) competed at the 2014 Winter Paralympics, an increase of one NPC over 2010.

Brazil, Turkey and Uzbekistan made their Winter Paralympic debut in Sochi, while Hungary and South Africa, who participated in Vancouver, did not send any athletes.

Competitions in the 2014 Winter Paralympics were held in five Winter Paralympic sports, with 72 medal events in total. New for 2014 was the addition of snowboarding events, which were incorporated into the alpine skiing program.

The closing ceremony of the 2014 Winter Paralympics was held on 16 March 2014 at Fisht Olympic Stadium. Entitled "Reaching the Impossible", the ceremony was themed around inclusivity, and featured sequences paying tribute to Russian abstract artist Wassily Kandinsky, and Alexey Pajitnov's classic video game Tetris. During his closing remarks, deputy Prime Minister Dmitry Kozak stated that the Games had become a "catalyst for our efforts to create a barrier-free environment in Russia", and promised that "this important work will continue throughout our vast country." Sir Phillip Craven congratulated Russia for hosting what he deemed to be the best Winter Paralympic Games, and stated that the Games' participants had "shown the world that absolutely anything is possible and that life is about amazing capabilities and not perceived deficiencies."[16][17][18]

Sochi's Paralympic medal design was unveiled in May 2013 alongside its Olympic equivalent. The design incorporates a "patchwork quilt" of diamonds, some of which are translucent, containing designs that reflect Russia's regions, and also contain inscriptions in braille.[19][20]

In February 2013, following its successful broadcast of the 2012 Summer Paralympics, British broadcaster Channel 4 announced on February 2014 that it had obtained the broadcast rights to further Games, including the 2014 Winter Paralympics, and 2016 Summer Paralympics. Channel 4 planned to broadcast more than 45 hours of coverage from Sochi.[21][22] Australian coverage was provided by the Australian Broadcasting Corporation, including live online streaming. However, aside from the opening ceremony (which was broadcast live), television coverage was limited to a daily half-hour highlights show.[23]

In the United States, NBC Sports acquired the rights to the 2014 and 2016 Paralympics in September 2013. Following criticism of its minimal coverage of past Paralympics (such as at the 2012 Summer Paralympics, where in contrast to its extensive Olympics coverage, it broadcast only five-and-a-half hours of highlights), NBC announced plans for a total of 52 hours of coverage during the Games, with at least 27 hours of coverage broadcast live, and live coverage of the opening ceremony. The majority of its coverage was relegated to NBC Sports Network, but NBC aired highlights of the opening ceremony the following afternoon, and live coverage of the sledge hockey finals.[24][25] CBC Sports, in conjunction with the Canadian Paralympic Committee, produced and syndicated television and digital coverage of the Games in Canada for CBC Television (30 hours), Ici Radio-Canada Télé (French, 7 hours), Sportsnet, AMI-tv (coverage with open described video), and Yahoo! Sports Canada.[26]

See also: Concerns and controversies at the 2014 Winter Olympics

Although concerns over LGBT rights still had a minor effect on the Games, they were overshadowed by a crisis in the Ukrainian region of Crimea which began during the Olympics, but became more severe immediately prior to the Paralympics.

Main article: Annexation of Crimea by the Russian Federation

On 27–28 February 2014 in the aftermath of the Ukrainian revolution, Russian troops seized control of most of the Crimean peninsula of Ukraine located on the northern coast of the Black Sea—roughly 480 kilometres (300 mi) from Sochi,[27] including civil buildings, airports, and military bases.[28] On 1 March 2014, the Russian legislature approved the use of the Russian military in Ukraine, and Russian officials stated that their military forces in Crimea were not a breach of existing agreements between Russia and Ukraine.[29] The Ukrainian response has been muted trying to find a diplomatic solution, with no military action on the part of Ukraine's government, which was formed in Kiev less than a week before the intervention. Russia vowed troops would stay until the political situation was "normalised".[30] A referendum on whether Crimea would separate from Ukraine was held on 16 March 2014—the same day as the closing ceremony of these Games.[31]

The effects of these developments led to several notable political actions surrounding the Paralympics. On 2 March 2014, British Prime Minister David Cameron announced that British government officials were planning to boycott the 2014 Winter Paralympics in response to the situation in Crimea, while Prince Edward cancelled plans to travel to Sochi for the Games "on the advice of government."[32][33] On 3 March 2014, United States National Security Council spokeswoman Caitlin Hayden announced that the United States would not send a presidential delegation to Sochi (which was to be led by Tammy Duckworth) at all, "in addition to other measures we are taking in response to the situation in Ukraine." Neither of the boycotts affected the participation of their respective athletes in the Games; in particular, Hayden went on to say that "President Obama continues to strongly support all of the U.S. athletes who will participate in the Paralympics and wishes them great success".[32][34]

IPC communications head Craig Spence reported prior to the Games that there were not any boycott efforts among athletes, and stated that although the organization would keep an eye on the situation in the Crimea, "we've obviously expressed our disappointment with what's going on in the political situation, but at the end of the day, we're not here to do politics. We're here to organize a sporting event." He went on to emphasize that the same level of security measures in place during the Olympics were in place during the Paralympics, ensuring that Sochi would be the "safest place" in the country during the Games.[27][35]

The Ukraine team still participated in the Games, but Valeriy Sushkevich, head of the country's National Paralympic Committee, warned that "if there is an escalation of the conflict, intervention on the territory of our country, God forbid the worst, we would not be able to stay here. We would go." Similarly to the Olympics, political protests and statements among athletes were forbidden during Paralympic events, although two major, symbolic protests by the Ukrainian team occurred during the Games. During the opening ceremonies, all but one of the country's 31 athletes declined to participate in the parade of nations. The country was represented solely by Nordic skier and flagbearer Mykailo Tkachenko, whose entrance was greeted with an ovation from the audience.[7] Some Ukrainian medalists were seen covering their medal with their hand during ceremonies as another form of silent protest; Sushkevich stated that the covering was "a demonstration that aggression and the high ideals of Paralympic sports are incompatible."[36]

On 18 July 2016, the World Anti-Doping Agency published a report covering significant state-sponsored doping in Russia. It found that Russia's Ministry of Sport and Federal Security Service (FSB) had operated a "state-dictated" system to implement an extensive doping program across the Olympics and Paralympics, and engaged in swapping to cover up positive urine samples.[37] The IPC found evidence that swapping of positive samples had occurred during the 2014 Winter Paralympics.[38][39][40][41]

Concerns surrounding LGBT rights in Russia and the country's "gay propaganda" law continued into the Paralympics. On 4 February 2014, Norway's openly gay health minister Bent Høie announced he would attend the Games with his husband, as is common for cabinet officials to travel with their spouses.[43] The Federation of Gay Games also started a petition calling for IPC president Philip Craven not to attend the Games if Russian authorities did not allow the Russian Open Games, a multi-sport event for LGBT athletes which organizers attempted to hold prior to the Paralympics, to occur. These games were faced with a bomb threat, and its venues arbitrarily pulling out of providing their services for events, which was believed to be a result of government pressure.[44]