The games consisted of four disciplines in three sports.[2]

In total 5 venues were used at the 2002 Winter Olympics around 4 cities and towns.[3]

The top 10 NPCs by number of gold medals are listed below. The host nation (United States) is highlighted.

Symbol and mascot of the games 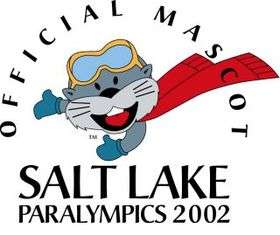 The mascot for the Paralympic Winter Games in Salt Lake City 2002 was Otto the otter. Indigenous peoples of the Americas consider otters to be fast swimmers, though in some stories a bit of a show-off. [4] After being nearly wiped out by pollution and overtrapping the river otter has been reintroduced to Utah and can be seen along the banks of the Green River and near Flaming Gorge. The otter was chosen as the official mascot of the Salt Lake 2002 Paralympic Winter Games because he embodies vitality and agility, and represents the spirit of every Paralympian.