The 1996 Paralympic Games in Atlanta, USA were held from August 16 to 25. It was the first Paralympics to get mass media sponsorship,[1] and had a budget of USD $81 million.[2]

It was the first Paralympic Games where International Sports Federation for Persons with an Intellectual Disability athletes were given full medal status.[3]

Symbol and mascot of the games

The mascot for the Paralympic Summer Games in Atlanta 1996 was Blaze. Blaze was created by Trevor Stone Irvin of Irvin Productions in Atlanta.

Blaze is a phoenix, a mythical bird that rises from ashes to experience a renewed life. The phoenix appears in Egyptian, Arabian, Chinese, Russian and Native American folklore and in all instances symbolizes strength, vision, inspiration and survival. The phoenix was an ideal mascot for the 1996 Atlanta Paralympic Games and later for BlazeSports America, a nonprofit organization that is the direct legacy of the Games. The phoenix has long been the symbol of Atlanta’s rebirth after its devastation in the American Civil War. But most importantly, it is the personification of the will, perseverance and determination of youth and adults with physical disability to achieve full and productive lives. Blaze, with his bright colors, height and broad wing span, reflects the traits, identified in a focus group of athletes with disability, as those they believed best represented the drive to succeed of persons with physical disability who pursue sports as recreation and as a competitive endeavor. Today, Blaze is the most recognizable symbol of disability sport in America. 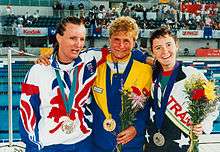 Eila Nilsson of Sweden celebrating her 50m freestyle B1 gold with Janice Burton of Great Britain and Tracey Cross of Australia.

The games consisted of 508 events spread over twenty sports, including three demonstration sports.[1]

A total of 1577 medals were awarded during the Atlanta games: 518 gold, 517 silver, and 542 bronze. The host country, the United States, topped the medal count with more gold medals, more bronze medals, and more medals overall than any other nation. Germany took the most silver medals, with 58.[5]

In the table below, the ranking sorts by the number of gold medals earned by the top ten nations (in this context a nation is an entity represented by a National Paralympic Committee). The number of silver medals is taken into consideration next and then the number of bronze medals.

One-hundred and four delegations participated in the Atlanta Paralympics.