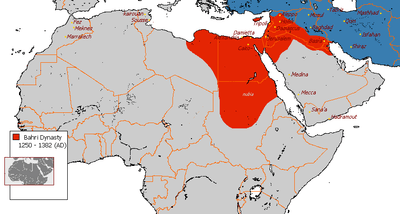 The Egyptian Mamluk Sultanate during the Bahri Mamluks.

The Bahriyya Mamluks or Bahri dynasty (Turkish: Bahri Hanedanı, al-Mamalik al-Bahariyya - المماليك البحرية) was a Mamluk dynasty of mostly Cuman-Kipchak Turkic origin that ruled the Egyptian Mamluk Sultanate from 1250 to 1382. They followed the Ayyubid dynasty, and were succeeded by a second Mamluk dynasty, the Burji dynasty.

Their name "Bahriyya" means 'of the river', referring to the location of their original settlement on Al-Rodah Island in the Nile (Nahr al-Nil) in Medieval Cairo[4] at the castle of Al-Rodah which was built by the Ayyubid Sultan as-Salih Ayyub[5][6]

The Mamluks formed one of the most powerful and wealthiest empires of the time, lasting from 1250 to 1517 in Egypt, North Africa, and the Levant—Near East.

In 1250, when the Ayyubid sultan as-Salih Ayyub died, the Mamluks he had owned as slaves murdered his son and heir al-Muazzam Turanshah, and Shajar al-Durr the widow of as-Salih became the Sultana of Egypt. She married the Atabeg (commander in chief) Emir Aybak and abdicated, Aybak becoming Sultan. He ruled from 1250 to 1257.[7][8]

The Mamluks consolidated their power in ten years and eventually established the Bahri Mamluks. They were helped by the Mongols' sack of Baghdad in 1258, which effectively destroyed the Abbasid caliphate. Cairo became more prominent as a result and remained a Mamluk capital thereafter.

The Mamluks were powerful cavalry warriors mixing the practices of the Turkic steppe peoples from which they were drawn and the organizational and technological sophistication and horsemanship of the Arabs. In 1260 the Mamluks defeated a Mongol army at the Battle of Ain Jalut in present-day Israel and eventually forced the invaders to retreat to the area of modern-day Iraq.[9] The defeat of the Mongols at the hands of the Mamluks enhanced the position of the Mamluks in the southern Mediterranean basin.[10][11] Baibars, one of the leaders at the battle, became the new Sultan after the assassination of Sultan Qutuz on the way home.[12][13]

In 1250 Baibars was one of the Mamluk commanders who defended Al Mansurah[14] against the Crusade knights of Louis IX of France, who was later definitely defeated, captured in Fariskur and ransomed.[15] Baibars had also taken part in the Mamluk takeover of Egypt. In 1261, after he became a Sultan, he established a puppet Abbasid caliphate in Cairo,[16] and the Mamluks fought the remnants of the Crusader states in Palestine until they finally captured Acre in 1291.[17]

Many Tatars settled in Egypt and were employed by Baibars.[18][19] He defeated the Mongols at the battle of Elbistan[20] and sent the Abbasid Caliph with only 250 men to attempt to retake Baghdad, but was unsuccessful. In 1266 he devastated Cilician Armenia and in 1268 he recaptured Antioch from the Crusaders.[21][22] In addition, he fought the Seljuks,[23] and Hashshashin; he also extended Muslim power into Nubia[19] for the first time, before his death in 1277.

Sultan Qalawun defeated a rebellion in Syria that was led by Sunqur al-Ashqar in 1280,[24][25] and also defeated another Mongol invasion in 1281 that was led by Abaqa outside Homs.[26] After the Mongol threat passed he recaptured Tripoli from the Crusaders in 1289.[27] His son Khalil captured Acre, the last Crusader city, in 1291.[28][29]

Territory of the Golden Horde in 1389

The Mongols renewed their invasion in 1299,[30] but were again defeated in 1303.[31][32] The Egyptian Mamluk Sultans entered into relations with the Golden Horde who converted to Islam[33] and established a peace pact with the Mongols[34] in 1322.

Sultan Al-Nasir Muhammad married a Mongol princess in 1319. His diplomatic relations were more extensive than those of any previous Sultan, and included Bulgarian, Indian, and Abyssinian potentates, as well as the pope, the king of Aragon and the king of France.[35] Al-Nasir Muhammad organized the re-digging of a canal in 1311 which connected Alexandria with the Nile.[34] He died in 1341.

The constant changes of sultans that followed led to great disorder in the provinces. Meanwhile, in 1349 Egypt and the Levant in general were introduced to Black Death, which is said to have carried off many lives of the inhabitants.[36][37]

In 1382 the last Bahri Sultan Hajji II was dethroned and the Sultanate was taken over by the Circassian Emir Barquq. He was expelled in 1389 but returned to power in 1390, setting up the succeeding Burji dynasty.[38]

On a general level, the military during the Bahri Mamluks period can be divided into several aspects

An outstanding achievement of Mamluk army were their success defeating the Ilkhanate Mongol army which considered invincible on the field in that era has outlined the major parts of the military quality of the Mamluk. training manuals of the Egyptian Mamluks and others reveal the methods that could produce the remarkable skills of slave soldiers mamluks. The Egyptian Mamluks were expected to be able to shoot three arrows in one and a half seconds; and capable to strike with the sword, while galloping, three times a second. They are also able to outshooting Mongols cavalry.[39]

Another reason was recorded by Ibn Battuta that the Mongol horses were suffered by the climate of summer. Which is the similar reason the Chagatai Khanate was defeated by Mamluk dynasty of India counterpart led by Ghiyas ud din Balban, who also possessed military might in similar quality with Mamluk of Egypt, as Amir Khusrau remarks "Although each year the Mongols come from Khurasan, (they) yield up their ghosts wherever the Turks send the showers of their fatal arrows."[40][41]