For the modern micronation, see Dominion of British West Florida. 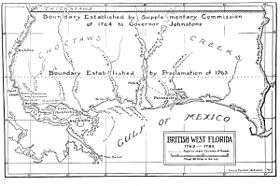 West Florida was a colony of the Kingdom of Great Britain from 1763 until 1783 when it was ceded to Spain as part of the Peace of Paris.

British West Florida comprised parts of the modern U.S. states of Louisiana, Mississippi, Alabama and Florida. Effective British control ended in 1781 when Spain captured Pensacola. The territory subsequently became a colony of Spain, parts of which were gradually annexed piecemeal by the United States beginning in 1810.

In 1762 during the Seven Years' War a British expedition attacked and occupied Havana, the capital of Cuba. To secure the return of this valuable city, Spain agreed to cede its territory of La Florida to Great Britain under the 1763 Treaty of Paris. France also ceded a large segment of New France to Great Britain, including everything on the east bank of the Mississippi River, except for the city of New Orleans. The British divided these new territories into two separate colonies East Florida, with its capital in St Augustine and West Florida, with the former Spanish settlement of Pensacola as its capital. By a separate treaty Spain was given the western side of the Mississippi, which formed Spanish Louisiana with its capital at New Orleans at the mouth of the river. Many of the existing Spanish inhabitants of Florida were evacuated to Cuba, and new British and American settlers arrived to take over the land.

In 1763 British troops arrived and took possession of Pensacola. George Johnstone was appointed as the first British Governor, and in 1764 a colonial assembly was established.[1][2] The structure of the colony was modeled after the existing British colonies in America, as opposed to Quebec, which was based on a different structure. In contrast to East Florida, where there was little development and population growth, West Florida began to boom in the years following the British takeover, and thousands of new arrivals came to take advantage of the favorable conditions there.

West Florida was invited to send delegates to the First Continental Congress which was convened to present colonial grievances against the British Parliament to George III, but along with several other colonies, including East Florida, they declined the invitation. Once the American War of Independence had broken out, the colonists remained overwhelmingly loyal to the Crown. In 1778 the Willing Expedition proceeded with a small force down the Mississippi, ransacking estates and plantations, until they were eventually defeated by a local militia. In the wake of this, the area received a small number of British reinforcements. 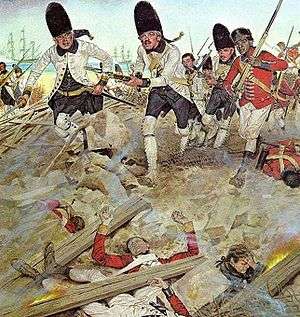 Following an agreement signed at Aranjuez, Spain entered the American Revolutionary War on the side of France but not the Thirteen Colonies.[3] Spanish troops under Bernardo de Galvez advanced and seized Baton Rouge and Mobile. In 1781 Spain captured Pensacola and its garrison. As part of the 1783 Peace of Paris, Great Britain ceded the territories of West Florida and East Florida back to Spain. When Spain acquired West Florida in 1783, the eastern British boundary was the Apalachicola River, but Spain in 1785 moved it eastward to the Suwannee River.[4][5] The purpose was to transfer San Marcos and the district of Apalachee from East Florida to West Florida.[6][7]