The history of human activity in Nauru, an island country in the Pacific Ocean, began roughly 3,000 years ago when 12 Micronesian and Polynesian clans settled the island. 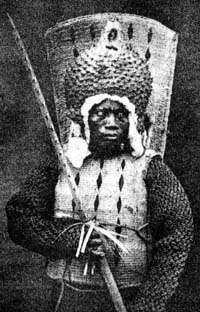 Nauru was first settled by Micronesian and Polynesian peoples at least 3,000 years ago.[1] Nauruans subsisted on coconut and pandanus fruit, and engaged in aquaculture by catching juvenile ibija fish, acclimated them to freshwater conditions, and raised them in Buada Lagoon, providing an additional reliable source of food.[2] Traditionally only men were permitted to fish on the reef, and did so from canoes or by using trained man-of-war hawks.

There were traditionally 12 clans or tribes on Nauru, which are represented in the 12-pointed star in the nation's flag. Nauruans traced their descent on the female side. The first Europeans to encounter the island were on the British whaling ship Hunter, in 1798. When the ship approached, "many canoes ventured out to meet the ship. The Hunter's crew did not leave the ship nor did Nauruans board, but Captain John Fearn's positive impression of the island and its people" led to its English name, Pleasant Island.[3] This name was used until Germany annexed the island 90 years later.

From around 1830, Nauruans had contact with Europeans from whaling ships and traders who replenished their supplies (such as fresh water) at Nauru. The islanders traded food for alcoholic toddy and firearms. The first Europeans to live on the island, starting perhaps in 1830, were Patrick Burke and John Jones, Irish convicts who had escaped from Norfolk Island, according to Paradise for Sale.[4] Jones became "Nauru's first and last dictator," who killed or banished several other beachcombers who arrived later, until the Nauruans banished Jones from the island in 1841.[5]

The introduction of firearms and alcohol destroyed the peaceful coexistence of the 12 tribes living on the island. A 10-year internal war began in 1878 and resulted in a reduction of the population from 1,400 (1843) to around 900 (1888).[6] Ultimately, alcohol was banned and some arms were confiscated.

In 1886, Germany was granted the island under the Anglo-German Convention. The island was annexed by Germany in 1888 and incorporated into Germany's New Guinea Protectorate. On 1 October 1888, the German gunboat SMS Eber landed 36 men on Nauru.[7] Accompanied by William Harris the German marines marched around the island and returned with the twelve chiefs, the white settlers and a Gilbertese missionary.[7] The chiefs were kept under house arrest until the next morning, when the annexation ceremony began with the raising of the German flag.[7] The Germans told the chiefs that they had to surrender all weapons and ammunition within 24 hours or the chiefs would be taken prisoner.[7] By the morning of 3 October 765 guns and 1,000 rounds of ammunition were turned over.[7] The Germans called the island Nawodo or Onawero. The arrival of the Germans ended the war, and social changes brought about by the war established kings as rulers of the island, the most widely known being King Auweyida. Christian missionaries from the Gilbert Islands also arrived at the island in 1888.[8] The Germans ruled Nauru for almost three decades. Robert Rasch, a German trader who married a native woman, was the first administrator, appointed in 1890.

Phosphate was discovered on Nauru in 1900 by the prospector Albert Ellis. The Pacific Phosphate Company started to exploit the reserves in 1906 by agreement with Germany. The company exported its first shipment in 1907.[9]

In 1914, following the outbreak of World War I, Nauru was captured by Australian troops, after which Britain held control until 1920. Australia, New Zealand, and the United Kingdom signed the Nauru Island Agreement in 1919, creating a board known as the British Phosphate Commission (BPC). This took over the rights to phosphate mining.[10] According to the Commonwealth Bureau of Census and Statistics (now the Australian Bureau of Statistics), "In common with other natives, the islanders are very susceptible to tuberculosis and influenza, and in 1921 an influenza epidemic caused the deaths of 230 islanders." In 1923, the League of Nations gave Australia a trustee mandate over Nauru, with the United Kingdom and New Zealand as co-trustees.[11][12] In 1932, the first Angam Baby was born.

Map of Nauru before 1914
Main article: Japanese occupation of Nauru

During World War II, Nauru was subject to significant damage from both Axis (German and Japanese) and Allied forces.

Japanese troops occupied Nauru on 26 August 1942.[14] The native Nauruans were badly treated by the occupying forces. On one occasion thirty nine leprosy sufferers were reputedly loaded onto boats which were towed out to sea and sunk. The Japanese troops built an airfield on Nauru which was bombed for the first time on 25 March 1943, preventing food supplies from being flown to Nauru. In 1943 the Japanese deported 1,200 Nauruans to work as labourers in the Chuuk islands.[13]

Nauru was finally set free from the Japanese on 13 September 1945, when Captain Solda, the commander of all the Japanese troops on Nauru, surrendered the island to the Royal Australian Navy and Army. This surrender was accepted by Brigadier J. R. Stevenson, who represented Lieutenant General Vernon Sturdee, the commander of the First Australian Army, on board the warship HMAS Diamantina[15] Arrangements were made to repatriate from Chuuk the 737 Nauruans who survived Japanese captivity there. They were returned to Nauru by the BPC ship Trienza in on 1 January 1946.[16] In 1947, a trusteeship was established by the United Nations, and Australia, New Zealand, and the United Kingdom became the U.N. trustees of the island, with administration passing mostly to Australia.

Nauru became self-governing in January 1966. On 31 January 1968, following a two-year constitutional convention, Nauru became the world's smallest independent republic. It was led by founding president Hammer DeRoburt. In 1967, the people of Nauru purchased the assets of the British Phosphate Commissioners, and in June 1970, control passed to the locally owned Nauru Phosphate Corporation. Money gained from the exploitation of phosphate was put into the Nauru Phosphate Royalties Trust and gave Nauruans the second highest GDP Per Capita (second only to the United Arab Emirates) and one of the highest standards of living in the Third World.[17]

In 1989, Nauru took legal actions against Australia in the International Court of Justice over Australia's actions during its administration of Nauru. In particular, Nauru made a legal complaint against Australia's failure to remedy the environmental damage caused by phosphate mining.[18] Certain Phosphate Lands: Nauru v. Australia led to an out-of-court settlement to rehabilitate the mined-out areas of Nauru.

By the close of the twentieth century, the finite phosphate supplies were fast running out. Nauru finally joined the UN in 1999.

As its phosphate stores began to run out (by 2006, its reserves were exhausted), the island was reduced to an environmental wasteland. Nauru appealed to the International Court of Justice to compensate for the damage from almost a century of phosphate strip-mining by foreign companies. In 1993, Australia offered Nauru an out-of-court settlement of A$2.5 million annually for 20 years. New Zealand and the UK additionally agreed to pay a one-time settlement of $12 million each. Declining phosphate prices, the high cost of maintaining an international airline, and the government's financial mismanagement combined to make the economy collapse in the late 1990s. By the new millennium, Nauru was virtually bankrupt.

President Bernard Dowiyogo took office in April 2000 for his fourth and, after a minimal hiatus, fifth stints as Nauru's top executive. Dowiyogo first served as president from 1976 to 1978. He returned to that office in 1989, and was re-elected in 1992. A vote in parliament, however, forced him to yield power to Kinza Clodumar in 1995. Dowiyogo regained the presidency when the Clodumar government fell in mid-1998.

In 2001, Nauru was brought to world attention by the Tampa affair, a Norwegian cargo ship at the centre of a diplomatic dispute between Australia, Norway and Indonesia. The ship carried asylum seekers, hailing primarily from Afghanistan, who were rescued while attempting to reach Australia. After much debate many of the immigrants were transported to Nauru, an arrangement known in Australia as the "Pacific Solution". Shortly thereafter, the Nauruan government closed its borders to most international visitors, preventing outside observers from monitoring the refugees' condition.

In December 2003, several dozen of these refugees, in protest of the conditions of their detention on Nauru, began a hunger strike. The hunger strike was concluded in early January 2004 when an Australian medical team agreed to visit the island. Since then, according to recent reports, all but two of the refugees have been allowed into Australia.

Nauru was also approached by the U.S. with a deal to modernize Nauru's infrastructure in exchange for suppression of the island's lax banking laws that allow activities that are illegal in other countries to flourish. Under this deal, allegedly, Nauru would also establish an embassy in China and perform certain "safehouse" and courier services for the U.S. government, in a scheme codenamed "Operation Weasel". Nauru agreed to the deal and instituted banking reform, but the U.S. later denied knowledge of the deal. The matter is being pursued in an Australian court, and initial judgments have been in favor of Nauru.

The government is desperately in need of money to pay off salary arrears of civil servants and to continue funding the welfare state built up in the heyday of phosphate mining (Nauruans pay no taxes). Nauru has yet to develop a plan to remove the innumerable coral pinnacles created by mining and make those lands suitable for human habitation.