The party is officially committed to multi-tendency democratic socialism. The Socialist Party USA, along with its predecessor, has received varying degrees of support when its candidates have competed against those from the Republican and Democratic parties. The SPUSA advocates for complete independence from the Democratic Party.

The SPUSA self-describes as opposing all forms of oppression, specifically capitalism and authoritarian forms of communism, the Party advocates for the creation of a "radical democracy that places people's lives under their own control—a non-racist, classless, feminist socialist society [...] where working people own and control the means of production and distribution through democratically-controlled public agencies, cooperatives, or other collective groups; where full employment is realized for everyone who wants to work; where workers have the right to form unions freely, and to strike and engage in other forms of job actions; and where the production of society is used for the benefit of all humanity, not for the private profit of a few".[3]

The SPUSA's National Office is located at 168 Canal Street in the Chinatown neighborhood of New York City. It had been headquartered at the AJ Muste Institute, also in New York City, but the party and all other tenants were forced to move when the building was sold in 2016. The party has four chartered state organizations in California, Michigan, New Jersey, and New York, as well as eighteen chartered locals throughout the country.[4]

See also: Socialist movement in the United States and Socialist Party of America

In 1958, the Independent Socialist League led by Max Shachtman dissolved to join the Socialist Party of America. Shachtman[6] had written that Soviet communism was a new form of class society, bureaucratic collectivism, in which the ruling class exploited and oppressed the population, and therefore he opposed the spread of communism.[7][8] Shachtman also argued that democratic socialists should work with activists from labor unions and civil-rights organizations to help build a social-democratic "realignment" of the Democratic Party. Though he died on 4 November 1972 and had little involvement with the Socialist Party in the year proceeding his death, his followers, identitified as "Shachmanites", exercised a tremendous amount of influence on the party.[7]

In its 1972 Convention, the Socialist Party changed its name to "Social Democrats, USA" by a vote of 73 to 34.[9] The change of name was supported by the two co-chairmen, Bayard Rustin and Charles S. Zimmerman (of the International Ladies Garment Workers' Union, ILGWU),[10] and by the First National Vice Chairman, James S. Glaser; these three were re-elected by acclamation.[9]

Renaming the party as SDUSA was meant to be "realistic". The New York Times observed that the Socialist Party had last sponsored Darlington Hoopes as its candidate for President in the 1956 election, who received only 2,121 votes, which were cast in only six states. Because the party no longer sponsored candidates in presidential elections, the name "party" had been "misleading"; "party" had hindered the recruiting of activists who participated in the Democratic Party, according to the majority report. The name "Socialist" was replaced by "Social Democrats" because many American associated the word "socialism" with Soviet communism.[9] Also, the Party wished to distinguish itself from two small Marxist parties.[11]

The Convention elected a national committee of 33 members, with 22 seats for the majority caucus, 8 seats for Harrington's coalition caucus, 2 for the Debs caucus, and one for the "independent" Samuel H. Friedman,[12] who also had opposed the name change.[9]

The convention voted on and adopted proposals for its program by a two-one vote, with the majority caucus winning every vote.[12] On foreign policy, the program called for "firmness toward Communist aggression". However, on the Vietnam War, the program opposed "any efforts to bomb Hanoi into submission" and to work for a peace agreement that would protect Communist political cadres in South Vietnam from further military or police reprisals. Harrington's proposal for an immediate cease fire and an immediate withdrawal of U.S. forces was defeated.[12] Harrington complained that, after its previous convention, the Socialist Party had endorsed George McGovern with a statement of "constructive criticism" and had not mobilized enough support for McGovern.[11]

After their defeat at the Convention, members of two minority caucuses helped to found new socialist organizations. At most 200 members of the Coalition Caucus joined Michael Harrington in forming the Democratic Socialist Organizing Committee,[13] which later became the Democratic Socialists of America.[14][15] At its start, DSOC had 840 members, of which 2 percent served on its national board in 1973 when SDUSA stated its membership at 1,800, according to a 1973 profile of Harrington.[13] Second, many members of the Debs Caucus joined David McReynolds in reconstituting the Socialist Party USA also in 1973.[16]

After its founding, the party promoted itself as the legitimate heir of the Socialist Party of America.[18] Former Mayor of Milwaukee, Frank Zeidler, was elected the first national chairperson of the party. Zeidler also helped re-organizing the party structure during its early years. He was later nominated as the party's candidacy for the presidential office, with Zeidler believing the party would be able to collaborate with other socialist parties nationwide to spread the message of socialism.[19]

Since 1936, a member of the party was elected to the city council of Iowa City and several members have won tens of thousands of votes when losing elections for statewide offices. In 1992, Socialist Iowa City Councilwoman Karen Kubby won her re-election with the highest vote in a contested election in the history of the Iowa City Council, and was re-elected until retiring from the Council in 2000.[20] In 2000, Socialist Wendell Harris received 19% of the vote for Mayor of Milwaukee, Wisconsin in the primary.[21] In 2008, Socialist Jon Osborne pulled in 22% of the vote for Rhode Island's 34th District State Senate seat, while listed on the ballot under the Socialist Party USA label.[22] During the 2010 United States Senate elections Dan La Botz of the Socialist Party of Ohio received 25,368 (0.68%) votes in Ohio.[23] In 2011, Socialist Matt Erard was elected to a three-year term on the city of Detroit’s Downtown District Citizens’ District Council.[24] In 2012, Socialist Pat Noble unseated his incumbent opponent in winning election to the Red Bank Regional High School Board of Education,[25] Socialist John Strinka received 10% of the vote while running with the party's ballot label for Indiana's 39th district State House seat,[26] and Socialist Troy Thompson received 27% of the vote for Mayor of Floodwood, Minnesota.[27] Also in 2012, candidate Mary Alice Herbert received 13.1% of the vote for Vermont Secretary of State while running with the dual nomination of both the Socialist and Vermont Liberty Union parties.[28][29]

For the 2016 general election, the Socialist Party nominated Mimi Soltysik and Angela Nicole Walker to be its presidential ticket. Other party members ran for office as well, including Jarrold Williams for United States Senate in Nevada, Seth Baker for Maine Senate and Michael Anderson for the Michigan House of Representatives.[30]

According to the party's first chairman, Frank Zeidler, the party had around 500 members nationwide in 1975.[19] The Socialist Party experienced substantial growth during the late 1970s and early to mid-1980s, expanding from only around 600 dues-paying members to around 1,700.[31] In 2008, WMNF claimed that the party had around 3,000 paying members.[32] However, in 2010 a CommonDreams article suggested that the organization had only 1,000 members with party members claiming it to be an increase in the amount of members.[33] A New York Times article in May 2011 stated that the party has "about 1,000 members nationally".[34] In February 2012, an article from The Root stated that the Party had a "membership around 1,500".[35] While some SP members favor a more gradual approach to socialism, most others envision a more sweeping or revolutionary transformation of society from capitalist to socialist through the decisive victory of the working class in the class struggle.[36] Some SP members also advocate revolutionary nonviolence or pacifism, while some consider armed struggle a possible necessity. The Party's Statement of Principles rejects equating socialism with a "welfare state" and calls for democratic social revolution from below.[36] The party is strongly committed to principles of socialist feminism and strives to further embody such commitment in its organizational structure. Its national constitution requires gender parity among its national co-chairs and co-vice chairs, its national committee members and alternates, and seated members of its branch- and region-elected delegations to the Party's biennial national conventions.[36][37][38] The Socialist Party also rejected the new healthcare reform law of 2010 approved by the Obama administration, with SP National Co-Chair Billy Wharton claiming it to be "a corporate restructuring of the health insurance industry created to protect the profit margins of private insurance companies".[39]

During his campaign, the Socialist Party candidate for president, Brian Moore, was very vocal against the idea that Barack Obama was a socialist of any kind.[40] He further commented on the issue, saying it was "misleading of the Republicans" to spread that message.[41] In a later statement about Obama's policies, Wharton called Obama's 2010 State of the Union Address a "public relations ploy". He concluded with; "The time for slick public relations campaigns has ended—the time for building our grassroots movements is more urgent than ever. The Socialist Party USA stands ready to join in such a political revitalization".[42]

The Party's National Action Committee condemned the Israeli actions during the Gaza War. The party demands that the Federal government of the United States cease providing military aid to the State of Israel as a precondition for peace. The party also seeks to begin an immediate withdrawal of American troops from Afghanistan.[43] During the 2008 presidential election, the Socialist Party continued to place a strong emphasis on its full-scale opposition to U.S. wars abroad, with Brian Moore, the presidential candidate, claiming the war was destroying small communities throughout the country. He also criticized what he called "pressure on the local governments" by the Bush administration.[44] The Socialist Party of Connecticut denounced Obama's troop surge in Afghanistan, claiming that the president was throwing away much needed resources the country needed to get pulled out of the financial crisis. After denouncing him, the state affiliate organized a protest in front of the federal building in Hartford.[45]

Greg Pason has run for office on the Socialist Party ticket many times starting in 1994.

SP candidates, such as New Jersey gubernatorial and senate candidate Greg Pason, have also emphasized immediate public service demands; these reforms include socializing the U.S. health care system, a steeply graduated income tax, universal rent control, and the elimination of all educational debts and tuition fees.[46] In 1997, Pason called auto insurance "a regressive tax against working people".[47] Moore was also vocal of his support for public healthcare and socialized medicine.[48] Moore believes that capitalism is a system based on both exploitation and selfishness, which operates to serve the interests of corporations and the ruling class, at the expense of workers and the poor. During his presidential campaign he claimed that the lack of available remedy to collapsing economic conditions stems from the capitalist system's foundation upon "greed", and advocated its replacement with a new system founded upon economic democracy through social ownership and workers' control of our reigning industrial and financial institutions.[40] 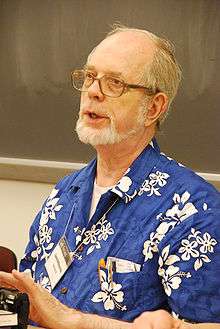 David McReynolds was twice the nominee for President

† In each line the first note refers to candidates and results, the second (if any) to ballot access (the number of state + D.C. ballots, out of 51, on which the Socialist Party candidates appeared) ‡ ^ Endorsed the Citizens Party's candidates in 1984.