Bradley Edwin "Brad" Guzan /ɡuːˈzæn/ (born September 9, 1984) is an American soccer player who plays as a goalkeeper for English club Middlesbrough in the Premier League, and the United States national team.

A college soccer second-team All-American for the South Carolina Gamecocks, Guzan was second overall pick in the 2005 MLS SuperDraft, signing for Chivas USA, with whom he was the 2007 MLS Goalkeeper of the Year. In July 2008, he joined Aston Villa for a fee of $1 million, where he has made over 100 Premier League appearances.

Guzan made his senior debut for the United States national team in 2006, and has been named in their squads for two FIFA World Cups and as many CONCACAF Gold Cups, winning the 2007 edition of the latter. He also featured for them at the 2008 Olympics.

Born in Evergreen Park, Illinois, Guzan, who is of Polish-American ancestry, played in his youth at the Chicago Magic Soccer Club and for the varsity soccer team at Providence Catholic High School in Illinois, from which he graduated in 2003. He went on to play two seasons in NCAA competition as a member of the South Carolina Gamecocks men's soccer team, where he was a second-team All-American in his sophomore season.[2]

After spending two years with the Chicago Fire Reserves in the USL Premier Development League, he chose to forgo the rest of his college years, signing a Generation Adidas contract with Major League Soccer (MLS). Chivas USA later drafted Guzan with the second overall pick of the 2005 MLS SuperDraft. On November 7, 2007, Guzan was named MLS Goalkeeper of the Year.[3]

Guzan (dressed in yellow) lines up with Aston Villa teammates prior to a UEFA Europa League match away at Rapid Wien in August 2009.

July 11, 2008, Aston Villa agreed a transfer fee in the region of £600,000, or $1 million, with MLS and Chivas USA to sign Guzan, significantly less than the £2 million agreed to in Aston Villa's failed move for the keeper in January 2008, the difference this time being that Guzan would have been out of his contract at the end of the 2008 season in November, allowing him to sign for Aston Villa during the January transfer window on a free transfer.

On August 1, 2008, Guzan was granted a work permit by the Home Office, allowing him to complete his move to Aston Villa.[4] He was due to be officially introduced by Aston Villa after competing for the United States at the 2008 Summer Olympics in Beijing. Guzan was the second American goalkeeper called Brad to be signed during the summer by Villa, following the capture of Premier League veteran Brad Friedel.

Guzan made his Villa debut in September 2008 in the League Cup at home to Queens Park Rangers. He made his European soccer debut in the UEFA Cup game away at Slavia Prague on November 6, 2008. The match finished 1–0 to Aston Villa, with Guzan making several saves to keep a clean sheet. His performance led to his manager Martin O'Neill describing him as a "class goalkeeper in the making." He also started in Villa's first leg against CSKA Moscow in the round of 32 of the UEFA Cup at Villa Park on February 18, 2009, also later appearing as a substitute against Liverpool after Friedel's red card.

Guzan played in every game that Villa won during their success in the 2009 Peace Cup, against Atlante, Porto and Juventus. He then helped Villa overcome the Italians in the final, most notably in the penalty shootout during which he saved the attempts of Vincenzo Iaquinta and Alessandro Del Piero.[5] The only game that Villa did not win (in the group stages against Málaga) was the one in which Guzan did not feature.

Despite having a successful pre-season period, Guzan was dropped from the first team in favor of Friedel for Villa's opening game of the 2009–10 season against Wigan Athletic. On October 27, 2009, Guzan saved four penalties in one match, one in normal time and three more in a penalty shoot-out win over Sunderland at the Stadium of Light in the last 16 of the League Cup. Despite these heroics, however, Friedel replaced him in goal for the final against Manchester United.[6] 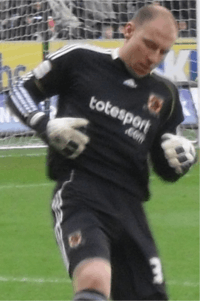 Guzan playing for Hull City in 2011

On December 31, 2010, Guzan was loaned to Football League Championship side Hull City on a one-month loan deal.[7][8] He made his debut for Hull on New Year's Day 2011, a 1–0 loss to Leicester City.[9] His second appearance for the club ended on a higher note, as his team went on to win 2–3 at Portsmouth.[10] He kept his first clean sheet for the club against Barnsley in a 2–0 win for Hull.[11] On January 25, Guzan extended his loan until the end of February.[12] He made a total of 11 league appearances for Hull before returning to Aston Villa on February 28.[13]

On March 8, however, Hull re-signed Guzan on an emergency loan deal due to an injury to goalkeeper Vito Mannone.[14] Guzan's first appearance back at the club was in a home match against Burnley.[15] Guzan's last game for Hull City came in a 1–2 win away at Watford on April 9, 2011, after which he returned to Aston Villa.[16][17]

On December 3, 2011, Guzan made his second Premier League appearance for Villa, coming on for the injured Shay Given against Manchester United. Given had been ruled out for a month with a torn hamstring so Guzan retained his place in the first team, giving him an extended run in Aston Villa's first team.

Guzan was released by Villa at the end of his contract in June 2012.[18] However, he was linked with a return to the club over the summer in a situation similar to that of fellow Aston Villa goalkeeper Andy Marshall in 2010. On July 16, 2012, Guzan was included in new manager Paul Lambert's 25-man squad for Villa's tour of the United States and on the same day, the player confirmed via Twitter that he had renewed his contract and rejoined the club.[19][20]

He made his return for Aston Villa against Newcastle United putting in a Man of the Match performance in a 1–1 draw at St James' Park.[21] He kept Villa's first clean sheet of the season in a 2–0 win against Swansea City and performed well enough to keep his position in the starting lineup. At the end of the 2012–13 Premier League season, he was voted the Aston Villa Player of the Year thanks to his large contribution to Villa's bid to avoid relegation.[22] On July 6, 2013, Guzan was rewarded for his play and signed a four-year contract extension with the Midlands club.[23]

On July 18, 2013, Guzan stated that he hoped to give Aston Villa the best years of his career and said that signing a new contract was a "no-brainer."[24]

On September 28, 2013, Guzan remarkably earned an assist on an Andreas Weimann goal in a 3–2[25] win over Manchester City in which Paul Lambert praised Guzan's distribution technique for goal kicks.

During the 2014–15 season, Guzan was dropped by new Villa manager Tim Sherwood after a high-profile error against Manchester City gifted Sergio Agüero the opening goal in a 3–2 defeat on April 25, 2015, with Shay Given taking his place for the final games of the Premier League season.[26] Guzan also missed out on Villa's run to the 2015 FA Cup Final, with Given playing in every round.

On July 29, 2016, Guzan signed for newly promoted Middlesbrough on a two-year deal after Aston Villa were relegated to the Championship.[27][28][29] 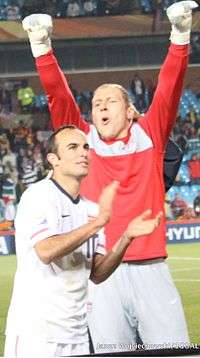 Guzan (right) with the United States national team at the 2010 FIFA World Cup.

Since 2006, Guzan has established himself as the second-choice goalkeeper for the United States national team behind Tim Howard. He made his World Cup qualifying debut in the second leg of a second round qualifier against Barbados (with the U.S. up 8–0 and having all but secured advancement). He later started in two semifinal matches after the U.S. had secured advancement to the final round—a 2–1 loss at Trinidad and Tobago and a 2–0 win over Guatemala. When Howard was suspended for a match at El Salvador due to accumulated yellow cards, Guzan started and helped earn a critical 2–2 draw. Guzan also started the USA's 3–0 win over Egypt in the 2009 Confederations Cup. On May 11, 2010, Guzan was named to the U.S. national team's provisional 30-man World Cup roster.

Since then, Guzan has sat back as a second-choice to keeper Tim Howard. While Howard was recovering from a back injury, Guzan started in two World Cup qualifier matches in the fourth round in March 2013. He did not allow a goal during either match, picking up a 1–0 win over Costa Rica at Dick's Sporting Goods Park and a historic 0–0 draw against Mexico at Estadio Azteca. Guzan also was capped for the U.S. during the 2015 CONCACAF Gold Cup, as Howard decided to take a break from international soccer following the 2014 World Cup. Both Guzan and Howard were capped for the Copa América Centenario, but Guzan was chosen as the starting keeper.

Guzan is a Christian. Guzan has spoken about his faith, saying, "My personal life, my faith life and my sport life – they all come together. I think they have to. You don’t have one without the others, and you have to have Jesus in your life. That is how I get through my personal life, how I get through my professional life – following Christ. ... we all need Christ in our lives. Money, fame, all those objects, they don’t mean anything if you don’t have Jesus in your life. All of those things can be gone in the blink of an eye. We can’t get caught up in it."[30]