José Andrés Guardado Hernández (born 28 September 1986) is a Mexican professional footballer who plays for Dutch club PSV Eindhoven and the Mexico national team. Mainly a midfielder, he can also operate as a left winger or left back.

Popularly known as Principito (Spanish for Little prince),[2][3] he came through the youth ranks at Atlas, then signed with Deportivo in Spain, going on to remain with the club for several seasons, four in La Liga. In 2012 he joined another team in the country, Valencia.

Born in Guadalajara, Jalisco, Guardado started playing professionally for Club Atlas, joining the team's youth system at the age of only seven and going on to appear in two full Primera División seasons. He made his league debut on 20 August 2005, in a 3–2 home win against C.F. Pachuca.[2]

In the summer of 2006, press speculations linked Guardado to several Serie A teams[4] as well as Real Madrid,[5] but Deportivo de La Coruña moved quickly and made an offer of €7 million for 75% of his rights. Atlas accepted the offer and the transfer was finalized on 7 July 2007, making him the most expensive transfer for a Mexican player in history, and the selling club remained entitled a 25% sell-on-fee as long as it held the remaining 25% of his rights.[6]

Guardado was officially presented on 24 July 2007, with the Spanish team giving him the number 18 shirt. He made his La Liga debut on 26 August in a 0–3 home loss against UD Almería,[7] and finished his first season with 26 games and five goals as Depor finished in ninth position, eventually qualifying to the UEFA Intertoto Cup – and the subsequent UEFA Cup, where he scored in a 3–0 group stage home win over Feyenoord.[8]

Coach Miguel Ángel Lotina stated that Guardado was a key player for Deportivo, and admired his talent and character.[9] He solidified himself as first-choice for the team, providing several assists and being charged with set pieces; he was also bothered with several injuries, however.[10][11]

Guardado only managed to appear in 20 matches for Deportivo in the 2010–11 season, and the Galicians were relegated to the second division after 20 years. On 27 March 2012 the player confirmed that 2011–12 would be his last campaign with the club,[12] and he netted a career-best 11 goals as his team returned to the top level after one year out, as champions. 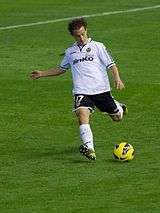 Guardado in action for Valencia in 2012

On 28 May 2012, Guardado signed a four-year contract with Valencia CF.[13][14] He made his official debut on 19 August, playing 66 minutes in a 1–1 away draw against Real Madrid.[15] During his first season he featured regularly at left back, mainly due to the serious injury of Jérémy Mathieu.[16][17]

Guardado scored his first goal for the Che on 12 May 2013, contributing to a 4–0 routing at Rayo Vallecano,[18] and he continued to feature mostly in the back sector in the following months. On 30 January 2014, Bundesliga club Bayer 04 Leverkusen announced that they had signed him on loan for the rest of the season, with an option to buy afterwards.[19] He made his debut on 2 February in a 0–1 loss to 1. FC Kaiserslautern for the DFB-Pokal, playing as a left wingback.[20]

For 2014–15, still owned by Valencia, Guardado joined PSV Eindhoven.[21] He made his Eredivisie debut on 31 August 2014 against Vitesse Arnhem, at Philips Stadion. On 7 March of the following year he scored his first goal for his new club, contributing to a 3–0 away victory over Go Ahead Eagles.[22]

On 15 March 2015, prior to the match against FC Groningen and amidst rumours of a transfer to AFC Ajax,[23] PSV fans displayed a Mexican flag tifo and a banner in Spanish which read "Andrés Guardado, our Golden Mexican Eagle. He has to stay in PSV Eindhoven. Our house is your house, Andrés".[24] On the 27th, PSV announced that they had reached a deal with Valencia over the permanent three-year transfer of the player, for an undisclosed fee;[25] on 18 April, with three matches to spare, the team won the league championship after a 4–1 win over SC Heerenveen, with him featuring the full 90 minutes.[26]

The following season, Guardado contributed with 25 matches to help the side successfully defend their title.[27] On 31 July he was also on the starting eleven against Feyenoord, who were defeated 1–0 in the Johan Cruyff Shield.[28]

Guardado made his first international appearance for Mexico in a friendly match against Hungary on 14 December 2005, four months after his first-team debut with Atlas. He was then called up to represent his country at the 2006 FIFA World Cup in Germany, where he appeared in the round-of-16 1–2 loss to Argentina; manager Ricardo Lavolpe's contract expired and was not renewed, but his replacement Hugo Sánchez kept the player in his setup.

Guardado's first game under the new manager was against the United States: his introduction from the bench saw the game turn in Mexico's favor, but the game eventually ended with a 0–2 defeat.[29] On 28 February 2007, in a friendly with Venezuela, he scored his first international goal.[30]

In the final of the 2007 CONCACAF Gold Cup, Guardado scored the opening goal against the United States. During the second half he collided head-on with Jonathan Spector while both attempted to head the ball, but managed to recover to play the rest of the match, which ended in a 1–2 loss;[31] he also participated in that year's Copa América, netting the third goal against Uruguay during the third-place match.[32]

Guardado assisted Rafael Márquez in the opening game of the 2010 World Cup against hosts South Africa, in a 1–1 draw.[33] He appeared in three out of four games, in another last-16 exit at the hands of Argentina.

On 5 March 2014, Guardado made his 100th appearance for Mexico, in a friendly with Nigeria.[37][38] Selected by Miguel Herrera for the 2014 World Cup in Brazil,[39] he started all the games as a left midfielder, and scored in last group phase contest against Croatia to contribute to a 3–1 win.[40]

Guardado scored six times at the 2015 CONCACAF Gold Cup,[41] his first being a first-half effort in a 6–0 routing of Cuba in the group stage and the third a penalty kick in the last-minute of the extra time quarter-final clash against Costa Rica (1–0).[42] In the semi-finals against Panama, he netted twice from the penalty spot to help his country come from behind and win it 2–1[43][44] and, in the decisive match against Jamaica, scored the opener in an eventual 3–1 triumph;[45] subsequently, he won the Golden Ball Award as most outstanding player.[46]

Picked for the Copa América Centenario squad,[47] Guardado was sent off for two bookable offenses in the first game, a 3–1 win over Uruguay (who played even more minutes with one player less) at the University of Phoenix Stadium on 5 June 2016.[48]

Guardado started his career as a winger. Later, at Valencia, he played as left-back and at PSV he began to operate as a midfielder. He had good passing and dribbling skills, also being proficient at free kicks and holding on the ball; he also possessed a powerful and accurate shot from distance, and he was also capable of aiding his team defensively due to his work-rate and stamina.[49][50][51][52]