The Trinidad and Tobago national football team, nicknamed the Soca Warriors, represents the twin-island Republic of Trinidad and Tobago in international football. It is controlled by the Trinidad and Tobago Football Association and competes in both CONCACAF (the Confederation of North, Central American and Caribbean Association Football) and the Caribbean Football Union, its sub-continental confederation. The team is ranked 54th in the world according to the FIFA World Rankings, and 103rd in the World Football Elo Ratings. They reached the first round of the 2006 FIFA World Cup and currently holds the record of being the smallest nation (both in size and population) to ever qualify for a FIFA World Cup.

The national team competes in the FIFA World Cup and the CONCACAF Gold Cup, in addition to the Caribbean Cup and other competitions by invitation. The Soca Warriors lone appearance at the FIFA World Cup came in 2006 after the team defeated Bahrain 2–1 on aggregate in the CONCACAF–AFC intercontinental play-off. The team has qualified for the CONCACAF Gold Cup on eight occasions with their best performance in 2000 after reaching the semi-finals, finishing 3rd. However, the national team has experienced great success in the Caribbean Cup having won the sub-continental competition eight times and runners-up on five occasions.

At the 1973 CONCACAF Championship, Trinidad and Tobago fell two points short of qualifying for the 1974 World Cup Finals in controversial fashion. Trinidad and Tobago lost a crucial game on 4 December 1973 against hosts Haiti 2–1 after being denied five goals. The referee, José Roberto Henríquez of El Salvador, and Canadian linesman James Higuet were subsequently banned for life by FIFA for the dubious events of the match.[2][3][4]

Main article: Trinidad and Tobago at the 2006 FIFA World Cup

Trinidad and Tobago qualified for the 2006 FIFA World Cup in Germany, its first-ever qualification for the tournament. During their qualifying campaign, they sat at the bottom of the table in the final round of qualifying with one point from three. However, after the arrival of Leo Beenhakker as team coach and the recalling of veteran players Dwight Yorke and Russell Latapy, Trinidad and Tobago reversed its fortunes and placed fourth in the group. They qualified via a playoff against Bahrain, recovering from a 1–1 draw at home to win 1–0 in Manama, Bahrain to book a place in the finals. As a result, Trinidad and Tobago became the smallest country to qualify for the FIFA World Cup.

In Germany, Trinidad and Tobago were grouped with England, Sweden and Paraguay in Group B. They drew their first game 0–0 against Sweden despite going down to ten men early in the second half. They lost both their remaining matches against England and Paraguay by a 2–0 margin.

Trinidad and Tobago began their campaign in the Second Round with a home and away series against Bermuda. Trinidad and Tobago lost the first match at home 1–2, but bounced back to win the away leg in Bermuda 2–0 to progress to the third round 3–2 on aggregate. The Soca Warriors advanced to Group 1 of the Third Round alongside the United States, Guatemala, and Cuba. Trinidad and Tobago progressed to the Fourth Round by placing second in the group with eleven points from six games. This qualified Trinidad and Tobago for the Fourth Round, or Hexagonal, against Costa Rica, El Salvador, Honduras, Mexico, and the United States. The Fourth Round was also played in a home and away format among the six teams involved. Qualification quickly turned disastrous for Trinidad and Tobago as they tied 2–2 with El Salvador after leading 2–0. They would then tie 1–1 with Honduras following a late-strike. However, three consecutive losses to the United States, Costa Rica, and Mexico found the Soca Warriors bottom of the Hexagonal with two points from their first five matches. In their sixth match, they recorded their first win of the round by defeating El Salvador 1–0. However, the victory was short lived as they suffered losses to Honduras and the United States the following month; ending their hopes to qualify for the World Cup.

Trinidad and Tobago entered qualification for the 2014 FIFA World Cup in the Second Round of CONCACAF as a seeded team with Guyana, Bermuda, and Barbados the other teams drawn in Group B. The Soca Warriors defeated Bermuda (1–0) and Bardados (2–0) in their first two matches to earn a full six points. However, on 7 October 2011, Trinidad and Tobago lost away to Bermuda in Devonshire Parish 2–1 to hurt its chances of advancing to the Third Round of qualification.[8] The team quickly rebounded four days later by defeating Barbados 4–0 in Hasely Crawford Stadium with a hat-trick from Lester Peltier.[9] Entering the final two matches in the Second Round, Trinidad and Tobago found itself in second place behind Guyana by one point. As only the group winner would advance to the Third Round of qualification, the Soca Warriors needed to take four points in the next two matches both facing Guyana to advance. Trinidad and Tobago first traveled to Providence, Guyana to face the Golden Jaguars on 11 November 2011. With an early goal from Ricky Shakes and another from Leon Cort in the 81st minute, Trinidad and Tobago found itself behind 2–0 and facing elimination. Kenwyne Jones managed to pull the team within a goal in the 93rd minute, but it was too late as the match would end 2–1 in favor of Guyana.[10] With the loss, Trinidad and Tobago were officially eliminated from qualification for the 2014 FIFA World Cup. On 12 January 2012, Otto Pfister was sacked following a disappointing campaign which saw the country's earliest exit from World Cup qualification since 1994.[11]

For the first eighty years of their existence, Trinidad and Tobago played their home matches all around the country with Queen's Park Oval, generally thought of as the most picturesque and largest of the old cricket grounds in the West Indies, as the most often used venue.[12] The cricket ground served as the country's largest stadium until the new National Stadium was built in Mucurapo, Port of Spain, to host the nation's athletics competitions and international football matches. 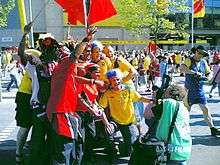 The major supporters' group for the national team is the Soca Warriors Supporters Club or the Warrior Nation. The group is a non-profit organisation that is independent of the Trinidad and Tobago Football Association. Formed shortly after Trinidad and Tobago secured qualification for the 2006 FIFA World Cup, the supporters' club was organised by Soca Warriors Online founder Inshan Mohammed and Nigel Myers.

The group's activities include promoting teams locally and globally, lobbying the Trinidad and Tobago Football Association as representatives of football fans, advocating fair pricing and allocation of event tickets, organising travel for fans to home and away matches, providing a family-oriented fans' organisation, and promoting football among the young people of Trinidad and Tobago.

For all past and present players who have appeared for the national team, see Trinidad and Tobago national team players.

The following players have been called to the squad in the last twelve months.

Trinidad and Tobago
Saint Vincent and the Grenadines

Saint Vincent and the Grenadines
Peru

As of 6 September 2016 Players in bold are still active, at least at club level.

Players with an equal number of caps are ranked in chronological order of reaching the milestone. 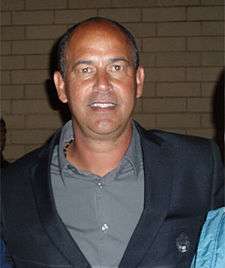