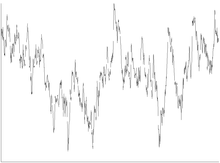 Analog display of random fluctuations in voltage in pink noise.

In electronics, noise is a random fluctuation in an electrical signal, a characteristic of all electronic circuits.[1] Noise generated by electronic devices varies greatly as it is produced by several different effects. Thermal noise is unavoidable at non-zero temperature (see fluctuation-dissipation theorem), while other types depend mostly on device type (such as shot noise,[1][2] which needs a steep potential barrier) or manufacturing quality and semiconductor defects, such as conductance fluctuations, including 1/f noise.

In communication systems, noise is an error or undesired random disturbance of a useful information signal. The noise is a summation of unwanted or disturbing energy from natural and sometimes man-made sources. Noise is, however, typically distinguished from interference,[lower-alpha 1] for example in the signal-to-noise ratio (SNR), signal-to-interference ratio (SIR) and signal-to-noise plus interference ratio (SNIR) measures. Noise is also typically distinguished from distortion, which is an unwanted systematic alteration of the signal waveform by the communication equipment, for example in the signal-to-noise and distortion ratio (SINAD) and total harmonic distortion plus noise (THD+N).

While noise is generally unwanted, it can serve a useful purpose in some applications, such as random number generation or dither.

Johnson–Nyquist noise[1] (sometimes thermal, Johnson or Nyquist noise) is unavoidable, and generated by the random thermal motion of charge carriers (usually electrons), inside an electrical conductor, which happens regardless of any applied voltage.

Thermal noise is approximately white, meaning that its power spectral density is nearly equal throughout the frequency spectrum. The amplitude of the signal has very nearly a Gaussian probability density function. A communication system affected by thermal noise is often modeled as an additive white Gaussian noise (AWGN) channel.

The root mean square (RMS) voltage due to thermal noise

, generated in a resistance R (ohms) over bandwidth Δf (hertz), is given by

where kB is Boltzmann's constant (joules per kelvin) and T is the resistor's absolute temperature (kelvin).

As the amount of thermal noise generated depends upon the temperature of the circuit, very sensitive circuits such as preamplifiers in radio telescopes are sometimes cooled in liquid nitrogen to reduce the noise level.

If electrons flow across a barrier, then they have discrete arrival times. Those discrete arrivals exhibit shot noise. The output of a shot noise generator is easily set by the current. Typically, the barrier in a diode is used.[3]

Shot noise in electronic devices results from unavoidable random statistical fluctuations of the electric current when the charge carriers (such as electrons) traverse a gap. The current is a flow of discrete charges, and the fluctuation in the arrivals of those charges creates shot noise. Shot noise is similar to the noise created by rain falling on a tin roof. The flow of rain may be relatively constant, but the raindrops arrive discretely.

where I is the DC current, q is the charge of an electron, and ΔB is the bandwidth in hertz.

The shot noise assumes independent arrivals. Vacuum tubes have shot noise because the electrons randomly leave the cathode and arrive at the anode (plate). A tube may not exhibit the full shot noise effect: the presence of a space charge tends to smooth out the arrival times (and thus reduce the randomness of the current).

Conductors and resistors typically do not exhibit shot noise because the electrons thermalize and move diffusively within the material; the electrons do not have discrete arrivial times. Shot noise has been demonstrated in mesoscopic resistors when the size of the resistive element becomes shorter than the electron-phonon scattering length.[4]

Flicker noise, also known as 1/f noise, is a signal or process with a frequency spectrum that falls off steadily into the higher frequencies, with a pink spectrum. It occurs in almost all electronic devices, and results from a variety of effects, though always related to a direct current.

Burst noise consists of sudden step-like transitions between two or more levels (non-Gaussian), as high as several hundred microvolts, at random and unpredictable times. Each shift in offset voltage or current lasts for several milliseconds, and the intervals between pulses tend to be in the audio range (less than 100 Hz), leading to the term popcorn noise for the popping or crackling sounds it produces in audio circuits.

If the time taken by the electrons from traveling from emitter to collector becomes comparable to the period of the signal being amplified, that is, at frequencies above VHF and beyond, so-called transit-time effect takes place and noise input admittance of the transistor increases. From the frequency at which this effect becomes significant it goes on increasing with frequency and quickly dominates over other terms.

Energy external of the receiver can couple noise, also by energy conversion. Generally this is done by fundamental interaction, in electronics mainly by inductive coupling and/or capacitive coupling.

Phenomenon in which a signal transmitted in one circuit or channel of a transmission systems creates undesired interferance onto a signal in another channel.

Modification or disruption of a signal travelling along a medium

This noise is also called static noise and it is the natural source of disturbance caused by lightning discharge in thunderstorm and the natural (electrical) disturbances occurring in nature.

Sources such as automobiles, aircraft, ignition electric motors and switching gear, High voltage wires and fluorescent lamps cause industrial noise. These noises are produced by the discharge present in all these operations.

Noise from outside the Earth includes:

Noise that originates from the Sun is called solar noise. Under normal conditions there is constant radiation from the Sun due to its high temperature. Electrical disturbances such as corona discharges, as well as sunspots can produce additional noise.

Distant stars generate noise called cosmic noise. While these stars are too far away to individually affect terrestrial communications systems, their large number leads to appreciable collective effects. Cosmic noise has been observed in a range from 8 MHz to 1.43 GHz.

In many cases noise found on a signal in a circuit is unwanted. When creating a circuit, one usually wants a true output of what the circuit has accomplished. There are many different noise reduction techniques that can change a noisy altered output signal to a more theoretical output signal.

The noise level in an electronic system is typically measured as an electrical power N in watts or dBm, a root mean square (RMS) voltage (identical to the noise standard deviation) in volts, dBμV or a mean squared error (MSE) in volts squared. Noise may also be characterized by its probability distribution and noise spectral density N0(f) in watts per hertz.

Noise is a random process, characterized by stochastic properties such as its variance, distribution, and spectral density. The spectral distribution of noise can vary with frequency, so its power density is measured in watts per hertz (W/Hz). Since the power in a resistive element is proportional to the square of the voltage across it, noise voltage (density) can be described by taking the square root of the noise power density, resulting in volts per root hertz (

Noise levels are usually viewed in opposition to signal levels and so are often seen as part of a signal-to-noise ratio (SNR). Telecommunication systems strive to increase the ratio of signal level to noise level in order to effectively transmit data. In practice, if the transmitted signal falls below the level of the noise (often designated as the noise floor) in the system, data can no longer be decoded at the receiver. Noise in telecommunication systems is a product of both internal and external sources to the system.

If the noise source is correlated with the signal, such as in the case of quantisation error, the intentional introduction of additional noise, called dither, can reduce overall noise in the bandwidth of interest. This technique allows retrieval of signals below the nominal detection threshold of an instrument. This is an example of stochastic resonance.