Bucheon FC 1995 is a South Korean professional football club located in the city of Bucheon, which is currently a member of the Challengers League. The club was founded by a group of former Bucheon SK supporters after the move of Bucheon SK to Jeju at the beginning of 2006. 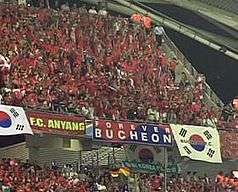 A Forever Bucheon banner, displayed by fans behind the movement to create the new Bucheon FC at a 2006 World Cup match between South Korea and France June 18th, 2006

Within weeks of the relocation of Bucheon SK, fans of the club began a movement to establish a brand new side in Bucheon, with an initial goal of creating a team to participate in the 2007 Korea National League season. The financial requirements for entry to the National League were so great and that, coupled with the launch of the K3 League in 2007, led to them readjusting their target and focusing on entry to the K3 League in 2008.

During the course of 2007 deals with several major sponsors, including Sports Toto, Daum and SK Energy were negotiated. On October 25, 2007, the club's name, Bucheon FC 1995, was announced, and the club was officially founded on December 1.

The team became a professional club and got an approval to join a member of K League Challenge from 2013 season on December 5, 2012.

In the first season as a professional club, they finished the season in 7th place.