The 2017 K League Challenge will be the fifth season of the K League Challenge, the second tier South Korean professional league for association football clubs since its establishment in 2013. Top-ranked team will promote to the K League Classic and the promotion play-offs among three clubs ranked between 2nd and 4th will be held after the regular season ends.

Daegu FC, the 2nd place-team in the 2016 K League Challenge, and Gangwon FC, promotion series winner, were promoted to 2017 K League Classic, then Suwon FC and Seongnam FC were relegated from the top tier. A total of 10 teams contest in the league. 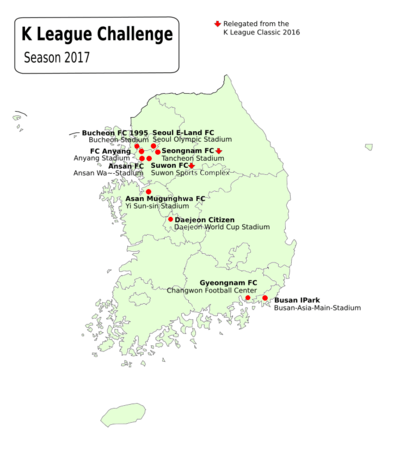 Note: Flags indicate national team as has been defined under FIFA eligibility rules. Players may hold more than one non-FIFA nationality.

Restricting the number of foreign players strictly to four per team, including a slot for a player from AFC countries. A team could use four foreign players on the field each game.