The Buffalo Bills Radio Network is a broadcast radio network based in Buffalo, New York. Its primary programming is broadcasts of Buffalo Bills home and away games to a network of 23 stations in upstate New York, northwestern Pennsylvania and Ontario, Canada.

Previously, the broadcasts originated from WBEN through much of the team's history except for a period from 1971 to 1977 when WKBW was team flagship. WGR briefly carried games in the early 1990s.[1] From 1998 through 2011, the Bills were flagshipped at WGRF, as well as other stations owned by Citadel Broadcasting. When Cumulus Media purchased Citadel in late 2011, it dropped Bills games from all of its stations at the end of the season.[2] Entercom Communications and Galaxy Communications picked up the rights, restoring broadcasts to WGR for the 2012 season.[3][4]

The network is an autonomous organization from the team, and is unique in that it, and not the team itself, was the main sponsor of the Bills' cheerleaders, the Buffalo Jills, until that squad was disbanded due to legal disputes.

Van Miller was the voice of the Buffalo Bills for its entire history until 2003, with the exception of seven years in the 1970s when WKBW controlled radio rights and Miller's TV employer, WBEN-TV, would not permit him to appear on WKBW broadcasts. He was succeeded by Murphy, his former color commentator, when he retired from the booth after the 2003 season. 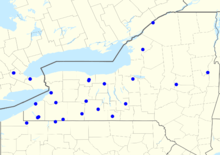 The WGR and network broadcast incorporates a broadcast delay; the WWKB broadcast is live, intended for listeners inside the stadium (and, in the event the Bills reach the Super Bowl, allowing for the local broadcast team to be heard on WWKB's clear channel signal across the East Coast).