For other uses of "Buryatia", see Buryatia (disambiguation).

The Republic of Buryatia (Russian: Респу́блика Буря́тия, tr. Respublika Buryatiya; IPA: [rʲɪsˈpublʲɪkə bʊˈrʲætʲɪjə]; Buryat: Буряад Республика, Buryaad Respublika, [burˈjaːt]) is a federal subject of Russia (a republic), located in Asia in Siberia. Its capital is the city of Ulan-Ude. Its area is 351,300 square kilometers (135,600 sq mi) with a population of 972,021 (2010 Census).[6] 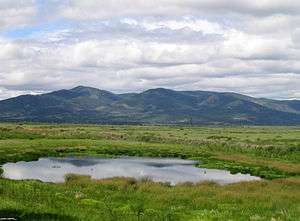 The republic is located in the south-central region of Siberia along the eastern shore of Lake Baikal. 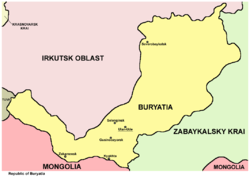 Over 80% of the republic's territory is located in the mountainous region, including the Baikal Mountains on the northern shores of Lake Baikal.

According to the 2010 Census,[6] ethnic Russians make up two thirds of the republic's population, while the ethnic Buryats are only 30%. Other groups include Ukrainians (0.6%), Tatars (0.7%), and a host of smaller groups, each accounting for less than 0.5% of the total population. 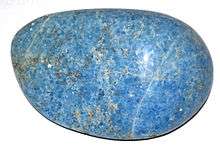 Unusual blue diopsidite skarn from the Dovyren Highlands, Buryatia. This tumble-polished rock is around 700my old.

The area of the present-day Buryatia was first colonized in the 17th century by Russians in search of wealth, furs, and gold.

In 1923, the Buryat-Mongolian Autonomous Soviet Socialist Republic (Buryat: Буряадай Автономито Совет Социалис Республика; Russian: Бурятская Автономная Советская Социалистическая Республика) was created as a result of the merger of State of Buryat-Mongolia and Mongol-Buryat Oblasts. In 1937, Aga Buryatia and Ust-Orda Buryatia were detached from the Buryat-Mongolian ASSR and merged with Chita and Irkutsk Oblasts, respectively. In 1958, the name "Mongol" was removed from the name of the republic. The Buryat ASSR declared its sovereignty in 1990 and adopted the name Republic of Buryatia in 1992. However, it remained an autonomous republic within the Russian Federation. 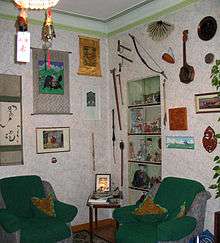 The head of the Republic is the Head (formerly President), who is appointed by the President of Russia for a four-year term. Between 1991-2007, the President was Leonid Vasilyevich Potapov, who was elected on July 1, 1994, re-elected in 1998 (with 63.25% of votes), and then re-elected again on June 23, 2002 (with over 67% of votes). Prior to the elections, Potapov was the Chairman of the Supreme Soviet of the Republic—the highest post at that time.

The current Head of the Republic is Vyacheslav Nagovitsyn, who was appointed by Vladimir Putin in 2007.[18]

The Republic's Constitution was adopted on February 22, 1994.

Traditionally, Buryats adhered to belief systems which were based on the deification of nature, belief in spirits and the possibility of their magic influence on the surroundings. They were led by shamans, who systematised tribal beliefs and cults. From the second half of the 17th century, beliefs and cults in the shamanic form were displaced by Buddhism, which became widespread in ethnic Buryatia. By the end of the 19th century, the majority of Buryats were part of the Buddhist tradition. A synthesis of Buddhism and traditional beliefs that formed a system of ecological traditions has constituted a major attribute of Buryat culture.[21]

As of a 2012 official survey[19] 27.4% of the population adheres to the Russian Orthodox Church, 19.8% to Buddhism, 2% to Rodnovery (Slavic folk religion), Tengrism or Buryat shamanism, 4% declares to be generically unaffiliated Christian (excluding Protestants), 1% are Orthodox Christian believers without belonging to churches or are members of other Orthodox churches, 1% are members of Protestant churches. In addition, 25% of the population declares to be "spiritual but not religious", 13% to be atheist, and 10.8% follows another religion or did not give an answer to the survey.[19]

Tibetan Buddhism and Orthodox Christianity are the most widespread religions in the republic. Many Slavs, who constitute around 67% of the population, are Russian Orthodox. Since the breakup of the USSR in 1991, a small number have converted to various Protestant denominations or to Rodnovery, Slavic native faith. There are also some Catholics among the Slavs. Most of the Germans (0.11% of the population) are also Orthodox, so are some other non-European groups like Armene (0.23%), Georgian (0.03%), and Soyot (0.37%). Buryats constitute 30.04% of the total population.

Most urban Buryats are either Buddhist or Orthodox, while those in the rural areas often adhere to Yellow shamanism, a mixture of shamanism and Buddhism, or to Black shamanism. There are also Tengrist movements. Siberian Tatars are around 0.7% of the population. However, due to isolation from the main body of Tatars, many of them now are either non-religious or Orthodox. Islam is followed by immigrant groups like Azeris and Uzbeks, who constitute another 0.7% of the population. 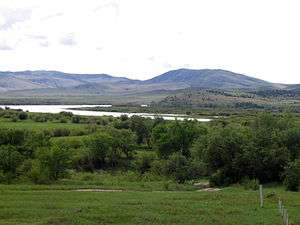 Lake Baikal is a popular tourist destination, especially in summer.