Diopside is a monoclinic pyroxene mineral with composition MgCaSi2O6. It forms complete solid solution series with hedenbergite (FeCaSi2O6) and augite, and partial solid solutions with orthopyroxene and pigeonite. It forms variably colored, but typically dull green crystals in the monoclinic prismatic class. It has two distinct prismatic cleavages at 87 and 93° typical of the pyroxene series. It has a Mohs hardness of six, a Vickers hardness of 7.7 GPa at a load of 0.98 N,[4] and a specific gravity of 3.25 to 3.55. It is transparent to translucent with indices of refraction of nα=1.663–1.699, nβ=1.671–1.705, and nγ=1.693–1.728. The optic angle is 58° to 63°. 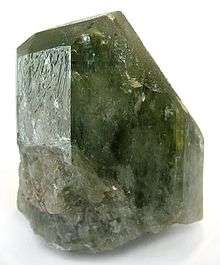 Diopside is found in ultramafic (kimberlite and peridotite) igneous rocks, and diopside-rich augite is common in mafic rocks, such as olivine basalt and andesite. Diopside is also found in a variety of metamorphic rocks, such as in contact metamorphosed skarns developed from high silica dolomites. It is an important mineral in the Earth's mantle and is common in peridotite xenoliths erupted in kimberlite and alkali basalt.

Diopside is a precursor of chrysotile (white asbestos) by hydrothermal alteration and magmatic differentiation;[5] it can react with hydrous solutions of magnesium and chlorine to yield chrysotile by heating at 600 °C for three days.[6] Some vermiculite deposits, most notably those in Libby, Montana, are contaminated with chrysotile (as well as other forms of asbestos) that formed from diopside.[7]

Chrome diopside ((Ca,Na,Mg,Fe,Cr)2(Si,Al)2O6) is a common constituent of peridotite xenoliths, and dispersed grains are found near kimberlite pipes, and as such are a prospecting indicator for diamonds. Occurrences are reported in Canada, South Africa, Russia, Brazil, and a wide variety of other locations. In the US, chromian diopside localities are described in the serpentinite belt in northern California, in kimberlite in the Colorado-Wyoming State Line district, in kimberlite in the Iron Mountain district, Wyoming, in lamprophyre at Cedar Mountain in Wyoming, and in numerous anthills and outcrops of the Tertiary Bishop Conglomerate in the Green River Basin of Wyoming. Much chromian diopside from the Green River Basin localities and several of the State Line Kimberlites have been gem in character.[8]

Gemstone quality diopside is found in two forms: the black star diopside and the chrome diopside (which includes chromium, giving it a rich green color). At 5.5–6.5 on the Mohs scale, chrome diopside is relatively soft to scratch. Due to the deep green color of the gem, they are sometimes referred to as Siberian emeralds, though they are on a mineralogical level completely unrelated, emerald being a precious stone and diopside being a semi-precious stone.[9]

Violane is a manganese-rich variety of diopside, violet to light blue in color.[10]

Diopside derives its name from the Greek dis, "twice", and òpsè, "face" in reference to the two ways of orienting the vertical prism.