The California State Senate is the upper house of the California State Legislature. The legislative body consists of 40 members, with each member representing approximately 931,000 people. Due to the state's large population and relatively small legislature, the State Senate has the largest population per representative ratio of any state legislative house. In the United States House of Representatives, California is apportioned 53 representatives, each representing approximately 704,566 people,[1] while in the State Senate, each of the 40 Senators represents approximately 931,349 people,[2] with the result that California state senators each actually represent more voters than California's representatives to the United States Congress do. Each member roughly represents a population equivalent to the state of Delaware. As a result of Proposition 140 in 1990 and Proposition 28 in 2012, members elected to the legislature prior to 2012 are restricted by term limits to two four-year terms (eight years), while those elected in or after 2012 are allowed to serve 12 years in the legislature in any combination of four-year state senate or two-year state assembly terms.[3]

The State Senate convenes at the California State Capitol in Sacramento.

In the current session, Democrats control 26 seats, while Republicans control 13. Twenty-seven seats, or two-thirds, are needed for a super-majority.

Prior to 1968, state senate districts were drawn so that each county had at most one state senator. This led to the situation of a populous county such as Los Angeles County being accorded the same number of state senators (1) as less populous counties such as Humboldt County. In Reynolds v. Sims, the United States Supreme Court compelled all states to draw up districts with equal population. As such, boundaries were changed to provide more equitable representation.

The red tones of the California State Senate Chamber are based on the British House of Lords, which is outfitted in a similar color. The dais rests along a wall shaped like an "E", with its central projection housing the rostrum. Along the cornice appears a portrait of George Washington and the Latin quotation: senatoris est civitatis libertatem tueri ("It is a senator's duty to protect the liberty of the people"). Almost every decorating element is identical to the Assembly Chamber.

The Secretary, the Sergeant-at-Arms, and the Chaplain are not members of the Legislature. 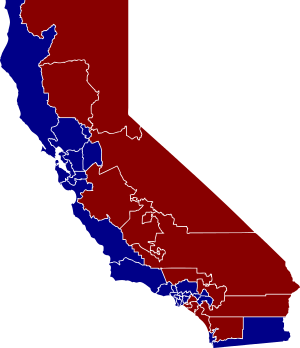