Composed of 160 state legislators term-limited to eight consecutive years. There is no limit on total number of terms. The state legislature meets beginning in March for a period not to exceed 60 calendar days. Special sessions are called as needed.

Its statutes, called "chapter laws" or generically as "slip laws" when printed separately, are compiled into the Laws of Florida and are called "session laws".[2] The Florida Statutes are the codified statutory laws of the state.[2] 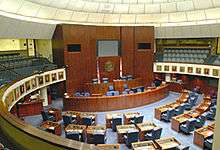 Chamber of the Florida Senate

The Florida Legislature is authorized by the Florida Constitution to create and amend the laws of the U.S. state of Florida, subject to the governor's power to veto legislation. To do so, legislators propose legislation in the forms of bills drafted by a nonpartisan, professional staff.[3] Successful legislation must undergo committee review, three readings on the floor of each house, with appropriate voting majorities, as required, and either be signed into law by the governor or enacted through a veto override approved by two-thirds of the membership of each legislative house.[3]

In 2009, legislators filed 2,138 bills for consideration. On average, the Legislature has passed about 300 bills into law annually.[4]

Earmarks that have not gone through the normal legislative process are known colloquially as "turkeys." In 2010, Florida TaxWatch, a government watchdog organization, counted 41 "turkeys" totaling $61 million.[5]

The Florida Constitution mandates a bicameral state legislature with an upper house Florida Senate of no more than 40 members and a lower Florida House of Representatives of no more than 120 members.[1] A legislator of either house must be at least 21 years of age, a resident of the district in which he or she will serve, and a resident of Florida for at least two years before being qualified to run for election.

Both chambers have been under Republican control since 1996.

The Florida Legislature meets in a 60-day regular session each spring. While sessions in odd-numbered years must begin on the first Tuesday after the first Monday in March, the Legislature can by law adjust the schedule for even-numbered years.[6][7] In recent years, the Legislature has opted to start in January so as to allow lawmakers to be home with their families during schools' spring breaks, and to give more time ahead of the legislative elections in the fall.[8] Legislators start committee activity in September of the year prior to the regular session. This is to promote their bills through committee in time for the official session.[9]

On the fourteenth day following each general election, the Legislature meets for an organization session to organize and select officers.[6]

Special sessions may be called by the governor, by a joint proclamation of the Senate President and House Speaker, or by a three-fifths vote of all legislators.[6][10]

In 2013, the legislature filed about 2000 bills. About 1000 of these are "member bills." The remainder are bills by committees responsible for certain functions, such as budget.[9]