The Alabama House of Representatives is the lower house of the Alabama Legislature, the state legislature of the U.S. state of Alabama. The House is composed of 105 members representing an equal number of districts, with each constituency containing at least 42,380 citizens. There are no term limits in the House. The House is also one of the five lower houses of state legislatures in the United States that is elected every four years. Virtually all other lower houses, including the United States House of Representatives, are elected for a two-year term.

The House meets at the Alabama State House in Montgomery.

All revenue-raising matters must originate in the Alabama House, just as in the Congress of the United States. The House must have a quorum to conduct business, and a majority of a quorum can pass any bill except a constitutional amendment, which requires a three-fifths vote of all those elected. An appropriation to a non-government organization, such as a private college, requires a two-thirds vote of those elected. In order to be a member of the Alabama House of Representatives, one must be a minimum of 21 years of age.

The Alabama House of Representatives is composed of 105 members, chosen from an equal number of districts across the state. Each member represents a district of approximately 42,000 people,[2] and is elected to a four-year term. Members of the House at the time of their election must have been citizens of Alabama for three years, and have lived in their respective districts for at least one year immediately preceding their election. The Speaker of the House is a member of the body and is elected by his colleagues to serve as its presiding officer.

Members of the House are paid a salary of ten dollars per day, plus expenses other than travel in an amount fixed by joint resolution of the legislature. 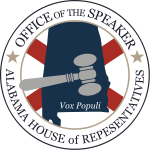 Seal of the Speaker

The Speaker of the House presides over the House of Representatives. The Speaker is elected by the majority party caucus followed by confirmation of the full House through the passage of a House Resolution. In addition to presiding over the body, the Speaker is also the chief leadership position and controls the flow of legislation and committee assignments. Other House leaders, such as the majority and minority leaders, are elected by their respective party caucuses relative to their party's strength in the chamber.