Carnot's theorem, developed in 1824 by Nicolas Léonard Sadi Carnot, also called Carnot's rule, is a principle that specifies limits on the maximum efficiency any heat engine can obtain. The efficiency of a Carnot engine depends solely on the difference between the hot and cold temperature reservoirs.

The formula for this maximum efficiency is

is the ratio of the work done by the engine to the heat drawn out of the hot reservoir. 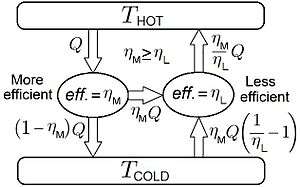 The proof of the Carnot theorem is a proof by contradiction, or reductio ad absurdum, as illustrated by the figure showing two heat engines operating between two reservoirs of different temperature. The heat engine with more efficiency (

) is driving a heat engine with less efficiency (

), causing the latter to act as a heat pump. This pair of engines receives no outside energy, and operates solely on the energy released when heat is transferred from the hot and into the cold reservoir. However, if

, then the net heat flow would be backwards, i.e., into the hot reservoir:

It is generally agreed that this is impossible because it violates the second law of thermodynamics.

We begin by verifying the values of work and heat flow depicted in the figure. First, we must point out an important caveat: the engine with less efficiency (

) is being driven as a heat pump, and therefore must be a reversible engine. If the less efficient engine (

) is not reversible, then the device could be built, but the expressions for work and heat flow shown in the figure would not be valid.

By restricting our discussion to cases where engine (

) has less efficiency than engine (

), we are able to simplify notation by adopting the convention that all symbols,

). Conservation of energy demands that for each engine, the energy which enters,

, must equal the energy which exits,

The figure is also consistent with the definition of efficiency as

It may seem odd that a hypothetical heat pump with low efficiency is being used to violate the second law of thermodynamics, but the figure of merit for refrigerator units is not efficiency,

, but the coefficient of performance (COP),[2] which is

delivers more heat to the hot reservoir for a given amount of work when it is being driven as a heat pump.

Having established that the heat flow values shown in the figure are correct, Carnot's theorem may be proven for irreversible and the reversible heat engines.[3]

To see that every reversible engine operating between reservoirs

must have the same efficiency, assume that two reversible heat engines have different values of

, and let the more efficient engine (M) drive the less efficient engine (L) as a heat pump. As the figure shows, this will cause heat to flow from the cold to the hot reservoir without any external work or energy, which violates the second law of thermodynamics. Therefore both (reversible) heat engines have the same efficiency, and we conclude that:

All reversible engines that operate between the same two heat reservoirs have the same efficiency.

This is an important result because it helps establish the Clausius theorem, which implies that the change in entropy is unique for all reversible processes.,[4]

over all paths (from a to b in V-T space). If this integral were not path independent, then entropy, S, would lose its status as a state variable.[5]

), then the second law of thermodynamics is violated. And, since the Carnot cycle represents a reversible engine, we have the first part of Carnot's theorem:

No irreversible engine is more efficient than the Carnot engine operating between the same two reservoirs.

where wcy is the work done per cycle. Thus, the efficiency depends only on qC/qH.

In addition, a reversible heat engine operating between temperatures T1 and T3 must have the same efficiency as one consisting of two cycles, one between T1 and another (intermediate) temperature T2, and the second between T2andT3. This can only be the case if

Specializing to the case that

is a fixed reference temperature: the temperature of the triple point of water. Then for any T2 and T3,

Therefore, if thermodynamic temperature is defined by

then the function f, viewed as a function of thermodynamic temperature, is

It follows immediately that

Substituting Equation 3 back into Equation 1 gives a relationship for the efficiency in terms of temperature:

Applicability to fuel cells and batteries

), they are clearly not limited by Carnot's theorem, which states that no power can be generated when

. This is because Carnot's theorem applies to engines converting thermal energy to work, whereas fuel cells and batteries instead convert chemical energy to work.[6] Nevertheless, the second law of thermodynamics still provides restrictions on fuel cell and battery energy conversion.[7]