In thermodynamics, the thermal efficiency ( 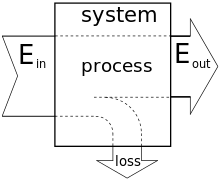 In general, energy conversion efficiency is the ratio between the useful output of a device and the input, in energy terms. For thermal efficiency, the input,

, to the device is heat, or the heat-content of a fuel that is consumed. The desired output is mechanical work,

, or possibly both. Because the input heat normally has a real financial cost, a memorable, generic definition of thermal efficiency is[1]

From the first law of thermodynamics, the energy output cannot exceed the input, so

When expressed as a percentage, the thermal efficiency must be between 0% and 100%. Efficiency is typically less than 100% because there are inefficiencies such as friction and heat loss that convert the energy into alternative forms. For example, a typical gasoline automobile engine operates at around 25% efficiency, and a large coal-fueled electrical generating plant peaks at about 46%, advances in Formula 1 motorsport regulations have pushed teams to develop highly efficient power units which peak around 45-50% thermal efficiency. The largest diesel engine in the world peaks at 51.7%. In a combined cycle plant, thermal efficiencies are approaching 60%.[2] Such a real-world value may be used as a figure of merit for the device.

For other systems the specifics of the calculations of efficiency vary but the non dimensional input is still the same. Efficiency = Output energy / input energy

Heat engines transform thermal energy, or heat, Qin into mechanical energy, or work, Wout. They cannot do this task perfectly, so some of the input heat energy is not converted into work, but is dissipated as waste heat Qout into the environment

The efficiency of even the best heat engines is low; usually below 50% and often far below. So the energy lost to the environment by heat engines is a major waste of energy resources. Since a large fraction of the fuels produced worldwide go to powering heat engines, perhaps up to half of the useful energy produced worldwide is wasted in engine inefficiency, although modern cogeneration, combined cycle and energy recycling schemes are beginning to use this heat for other purposes. This inefficiency can be attributed to three causes. There is an overall theoretical limit to the efficiency of any heat engine due to temperature, called the Carnot efficiency. Second, specific types of engines have lower limits on their efficiency due to the inherent irreversibility of the engine cycle they use. Thirdly, the nonideal behavior of real engines, such as mechanical friction and losses in the combustion process causes further efficiency losses.

The second law of thermodynamics puts a fundamental limit on the thermal efficiency of all heat engines. Even an ideal, frictionless engine can't convert anywhere near 100% of its input heat into work. The limiting factors are the temperature at which the heat enters the engine,

, and the temperature of the environment into which the engine exhausts its waste heat,

, measured in an absolute scale, such as the Kelvin or Rankine scale. From Carnot's theorem, for any engine working between these two temperatures:[4]

is usually the ambient temperature where the engine is located, or the temperature of a lake or river that waste heat is discharged into. For example, if an automobile engine burns gasoline at a temperature of

and the ambient temperature is

, then its maximum possible efficiency is:

It can be seen that since

is fixed by the environment, the only way for a designer to increase the Carnot efficiency of an engine is to increase

, the temperature at which the heat is added to the engine. The efficiency of ordinary heat engines also generally increases with operating temperature, and advanced structural materials that allow engines to operate at higher temperatures is an active area of research.

Due to the other causes detailed below, practical engines have efficiencies far below the Carnot limit. For example, the average automobile engine is less than 35% efficient.

Carnot's theorem applies to thermodynamic cycles, where thermal energy is converted to mechanical work. Devices that convert a fuel's chemical energy directly into electrical work, such as fuel cells, can exceed the Carnot efficiency. [5][6]

, and removed at the minimum temperature

An important parameter in the efficiency of combustion engines is the specific heat ratio of the air-fuel mixture, γ. This varies somewhat with the fuel, but is generally close to the air value of 1.4. This standard value is usually used in the engine cycle equations below, and when this approximation is made the cycle is called an air-standard cycle.

The Diesel cycle is less efficient than the Otto cycle when using the same compression ratio. However, practical Diesel engines are 30% - 35% more efficient than gasoline engines.[7] This is because, since the fuel is not introduced to the combustion chamber until it is required for ignition, the compression ratio is not limited by the need to avoid knocking, so higher ratios are used than in spark ignition engines.

The above efficiency formulas are based on simple idealized mathematical models of engines, with no friction and working fluids that obey simple thermodynamic rules called the ideal gas law. Real engines have many departures from ideal behavior that waste energy, reducing actual efficiencies far below the theoretical values given above. Examples are:

Another source of inefficiency is that engines must be optimized for other goals besides efficiency, such as low pollution. The requirements for vehicle engines are particularly stringent: they must be designed for low emissions, adequate acceleration, fast starting, light weight, low noise, etc. These require compromises in design (such as altered valve timing to reduce emissions) that reduce efficiency. The average automobile engine is only about 35% efficient, and must also be kept idling at stoplights, wasting an additional 17% of the energy, resulting in an overall efficiency of 18%.[7] Large stationary electric generating plants have fewer of these competing requirements as well as more efficient Rankine cycles, so they are significantly more efficient than vehicle engines, around 50% Therefore, replacing internal combustion vehicles with electric vehicles, which run on a battery that is charged with electricity generated by burning fuel in a power plant, has the theoretical potential to increase the thermal efficiency of energy use in transportation, thus decreasing the demand for fossil fuels.

When comparing different heat engines as sources of power, such as electric power or the power to run vehicles, the engine efficiency alone is only one factor. To give a meaningful comparison, the overall efficiency of the entire energy supply chain from the fuel source to the consumer must be considered. Although the heat wasted by heat engines is usually the largest source of inefficiency, factors such as the energy cost of fuel refining and transportation, and energy loss in electrical transmission lines to transport it, may offset the advantage of a more efficient heat engine.

For a device that converts energy from another form into thermal energy (such as an electric heater, boiler, or furnace), the thermal efficiency is

The heating value of a fuel is the amount of heat released during an exothermic reaction (e.g., combustion) and is a characteristic of each substance. It is measured in units of energy per unit of the substance, usually mass, such as: kJ/kg, J/mol.

The heating value for fuels is expressed as the HHV, LHV, or GHV to distinguish treatment of the heat of phase changes:

Which definition of heating value is being used significantly affects any quoted efficiency. Not stating whether an efficiency is HHV or LHV renders such numbers very misleading.

Heat pumps, refrigerators and air conditioners use work to move heat from a colder to a warmer place, so their function is the opposite of a heat engine. The work energy (Win) that is applied to them is converted into heat, and the sum of this energy and the heat energy that is moved from the cold reservoir (QC) is equal to the total heat energy added to the hot reservoir (QH)

The reason for not using the term 'efficiency' is that the coefficient of performance can often be greater than 100%. Since these devices are moving heat, not creating it, the amount of heat they move can be greater than the input work. Therefore, heat pumps can be a more efficient way of heating than simply converting the input work into heat, as in an electric heater or furnace.

Since they are heat engines, these devices are also limited by Carnot's theorem. The limiting value of the Carnot 'efficiency' for these processes, with the equality theoretically achievable only with an ideal 'reversible' cycle, is:

This is because when heating, the work used to run the device is converted to heat and adds to the desired effect, whereas if the desired effect is cooling the heat resulting from the input work is just an unwanted byproduct.

A counter flow heat exchanger is generally 100% efficient in transferring heat energy from one circuit to the other, albeit at a slight loss in temperature. However, for a more complete picture of heat exchanger efficiency, exergetic considerations must be taken into account.