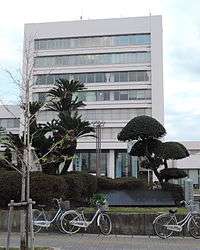 Chōshi has a humid subtropical climate (Köppen climate classification Cfa) with very warm summers and cool winters. Precipitation is significant throughout the year, although the winter months are slightly drier.

The commercial fishing and soy sauce industries were developed in Chōshi by the Tokugawa shogunate during the Edo period (1603 – 1868). Their development continued in the early industrialization of Japan in the Meiji period (1868 – 1912). Noted soy sauce producer Yamasa Corporation was incorporated in 1928, and Higeta Corporation in 1932. Chōshi was elevated to city status on February 11, 1933.[4] Chōshi was a center of industrial unrest in the early 20th century; there were numerous strikes and labor disputes at the soy sauce factories, and residents attacked the government offices in 1930 over heavy taxation and unaccounted expenditures by municipal authorities.[4]

Attack on Chōshi during WWII

Chōshi was an important military target during World War II due to its fishing industry and canneries. Before and during the war, Choshi was Tokyo's main food supplier. The first air raid on Chōshi by USAAF B-29 Superfortress bombers took place on March 10, 1945 causing minor damage. This was followed by the Chōshi Air Raid of July 19, 1945, during which time over 150 B-29s rained bombs on the city, destroying 33.8% of the urban area, killing 1181 civilians and destroying 5142 homes.[4][5] The city was bombed again on August 1, 1945. Emperor Hirohito made an official visit to the ruined city on June 6, 1946 after the surrender of Japan.

The city is home to the Chōshi Fishing Port. Its catches of sardines, bonito, and tuna are the largest in Chiba Prefecture.[7]Wind power is actively being developed off the rugged coast of Chōshi for use in the city and the greater Tokyo Metropolitan Area. Amber is also found in the area.

Chōshi is home to Inubōsaki Lighthouse, completed in 1874 by Scotsman Richard Henry Brunton, as well as numerous historic temples, including Enpuku-ji and Mangan-ji.