Kashima (鹿嶋市, Kashima-shi) is a city located in Ibaraki Prefecture, in the northern Kantō region of Japan. As of September 2015, the city had an estimated population of 66,860 and a population density of 631 persons per km². Its total area was 106.02 square kilometres (40.93 sq mi). Kashima is the home of the J. League's Kashima Antlers. Its home field, Kashima Soccer Stadium, was used as a site during the 2002 FIFA World Cup. The city is also the site of the Kashima Shrine, a Shinto shrine which is considered the birthplace of many influential styles of Japanese swordsmanship (Kenjutsu). It is one of the oldest shrines in eastern Japan.

Kashima is located in southeastern Ibaraki Prefecture, bordered by the Pacific Ocean to the east and the Kitaura portion of Lake Kasumigaura to the west. It is approximately 110 kilometers to the northeast of Tokyo.

Kashima was developed from the Nara period together with the Ichinomiya of Hitachi Province, Kashima Shrine. After the Meiji restoration, the town of Kashima was established with the creation of the municipalities system on April 1, 1889 within Kashima District. In 1954, Kashima annexed with the neighboring villages of Takamatsu, Toyosu, Toyosato and Namino. Kashima merged with the village of Ono on September 1, 1995 and was elevated to city status.

Kashima is the central city of the Kashima Industrial Zone, and it has a large industrial park with about 1500 factories, especially petrochemical and steel plants. The Japanese government created this zone in 1963, and the development was mostly completed in 1973. 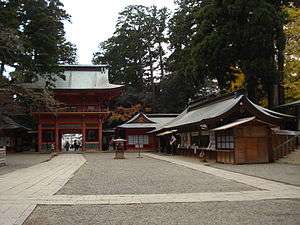