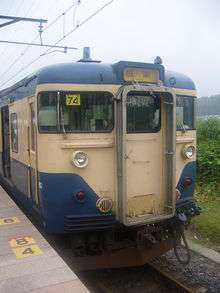 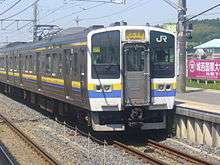 The Sōbu Main Line (総武本線, Sōbu-honsen) is a Japanese railway line operated by the East Japan Railway Company (JR East) in Japan. It connects Tokyo with the east coast of Chiba Prefecture, passing through the cities of Funabashi, Chiba, and Chōshi. Its name derives from the old provinces of the area which it serves: Musashi (武蔵国), Shimōsa (下総国) and Kazusa (上総国). Its official line color is yellow.

The character of the line changes at Chiba. The western, urbanized section is informally, but commonly, called the Sōbu Line (総武線, Sōbu sen) without using "Main". The "Main Line", in popular usage, refers to the trains operated east of Chiba on the line.

Signs at stations and in trains, and vocal announcements in trains, both maintain this distinction: with Main for the eastern rural section; without Main for the western frequent travel zone.[1]

Local trains run between Ochanomizu and Chiba Station and are called the Chūō-Sōbu Line (中央・総武線) or Sōbu-Local Line (総武緩行線, Sōbu-Kankō). Rapid trains are also operated from Tokyo Station to Chiba Station and use different tracks from the local service trains. The rapid trains are called Sōbu Kaisoku Line (総武快速線, Sōbu Kaisoku sen (Sōbu Rapid Line)). For the most part, these trains use the same track, except when they reach Tokyo: Sōbu-Kankō trains continue onto the Chūō Line, while Sōbu-Kaisoku trains continue onto the Yokosuka Line.

The Narita Express to Narita Airport Station and the Ayame to Chōshi use the Sōbu Main and Narita Lines for their journey.

For distances, connections and stops of rapid trains, see the route diagram.

Initially, the line was constructed by a private company, Sōbu Railway (総武鉄道, Sōbu Tetsudō). It opened the first service sections, between Ichikawa and Sakura on July 20, 1894, and extended to Tokyo City. In December of the same year, Honjo (本所, present Kinshichō) was opened, and in 1904, on the east bank of Sumida River, Ryōgokubashi (両国橋) (now Ryōgoku) became a terminal of this line. The access routes to the west, to Tokyo City, were tramways for passengers and ships for freight. From Sahara to the east, this line reached another terminus, Chōshi in 1897.

The line was nationalized in 1907 under the Railway Nationalization Act, and was double-tracked from Ryōgokubashi to Chiba the next year. The predecessor of the Japanese National Railways (JNR) planned to connect with other lines inside Tokyo. In 1932, a new passenger line was opened from Ochanomizu to Ryōgoku (with new platform besides the original terminal facility), and a frequent service of EMUs commenced. Electrification to Chiba was completed in 1935, and local trains have run through from the Chūō line since then. But, except for a few trains, no rapid service was operated on this line, and the passengers had to use the local train, or its rival, Keisei Electric Railway.

On March 10, 1945, the Bombing of Tokyo caused casualties estimated at 70,000–100,000, and destroyed stations of the line. During the last days of World War II in 1945, the Imperial Japanese Army thought the US Army would attempt a landing operation, "Operation Coronet", on Kujūkuri Beach, and transferred troops on the Sōbu Main Line.

Between Chiba and Chōshi, in the rural area of Chiba Prefecture, steam traction was used until recently. Fish and soy sauce from Chōshi were major freight items. Because Tokyo was close, JNR did not provide rapid or express trains from Ryōgoku to Chōshi until 1958. JNR operated tourist trains from Ryōgoku to the seaside resorts on the coast from the 1950s.

In the 1960s, JNR started the Five-Destination Operation (五方面作戦, Go Hōmen Sakusen) to steeply increase commuter demand, and it determined that a new rapid line would be constructed from Tokyo Station to Chiba. A new underground line from Tokyo to Kinshichō, and a four-tracked section to Tsudanuma were opened in 1972, and the operator began frequent rapid services from Tokyo to Chiba. The line was managed by the East Japan Railway Company (JR East) from 1987. The parallel Keiyō Line was opened closer to the coast in 1990. It was first constructed for freight services but later to carry passengers.

To the east of Chiba, electrification reached Chōshi in 1974, and Limited Express Shiosai has been operated from the underground Tokyo Station since 1975. Freight services from Chōshi ceased in 1986, just before the privatization of JNR, and regular passenger trains stopped using the Ryōgoku terminal platforms in 1988. JR East started a new airport train, the Narita Express in 1991. Rapid urbanization around Chiba Station made this section important for commuter traffic, for the city of Chiba, and for Greater Tokyo.