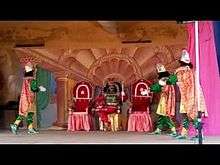 Chavittu Nadakam (Malayalam:ചവിട്ടുനാടകം) is a highly colorful Latin Christian classical art form originated in Cochin, Kerala state in India. Commonly believed that Gothuruth is the birthplace of Chavittu Nadakam. It is noted for its attractive make-up of characters, their elaborate costumes, detailed gestures and well-defined body movements presented in tune with the rhythmic playback music and complementary percussion. This art form highly resembles European Opera. Chavittu Nadakam is believed to be originated during the 16th century AD. This form of play is prevalent among the Latin Christian community in the districts of Alappuzha, Ernakulam and Thrissur of Kerala. This cultural heritage had been vanished out due to the lack of responsible patronage. So in 1991 Kreupasanam Pauranika Rangakalapeedom has been started in Aleppey in order to document, upkeep, rejuvenate and represent all the dying coastal traditional art forms of Kerala coast. Kreupasanam has so many training centers in different districts in Kerala for giving training to young generation especially the school students. Research students also are welcome for residential studies in this institution. For More information and videos visit www.chavittunadakam.com, www.kreupasanam.in

The most sensual blend of cultural influences can be seen in this Latin Christian dance-drama.

In Chavittu Nadakam there are large number of characters all in glittering medieval dress. It is the form of traditional musical dance drama, which symbolizes the martial tradition of Kerala Latin Christians.

Chaviitu Nadakam is a Latin Christian folk art form of Kerala. It is originated in Cochin where the Latin Christian Portuguese missionaries have instituted their first mission. Chavittu Nadakam is believed to be originated after the arrival of Portuguese to the Kerala shores. The reason behind this assumption is that Chavittu Nadakam has a significant European character in its costumes and outfits. But there are historical evidences that Kerala had connections with the western world well before the arrival of Portuguese. Even though some argue that the Chavittu Nadakam is created by Portuguese as they felt cultural emptiness when they arrived at Kerala, there are no evidences supporting this view. Also the fact that Chavittu Nadakam uses language for its playback songs and dialogue, suggest that the art form is indigenous in origin. 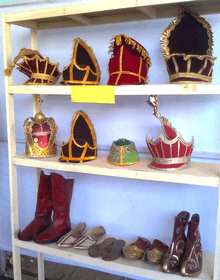 Chavittu Nadakam is usually performed on open stages. Sometimes the interior of a church is also a venue. The performers wear glittering European costumes. Training is provided to performers before staging the play. The master is known as Annavi. The whole play is performed through musicals. Dance and instrumental music are combined in this art form. The bell and drum are two instruments used as background score. The actors themselves sing and act. Though it used to be an open stage performance, in the recent times this is mostly played indoor. The predominant feature of this art is the artists stamping / pounding (Chavittu) the dance floor producing resonant sounds to accentuate the dramatic situations. The actors sing their lines loudly and with exaggerated gestures stamp with great force on the wooden stage. Hence literally Chavittu Nadakam means 'Stamping Drama'. Great stress is laid on the step, which goes in harmony with the songs. In these art forms there is a great importance for dance and art. Foot stamping dance, fighting and fencing are the essential part of Chavittunadakam. Royal dresses and ornamental costumes are necessary.

The play is considered a success if at the end, the stage cave into the pressure of heavy stamping.

The stories are mostly the heroic episodes of Bible or great Christian warriors. Historical incidents, the life and adventure of heroes like Charlemagne; stories of Alexander were the themes of Chavittu Nadakam in the 16th century. In the 18th century, spiritual themes like "Allesu-Nadakam", "Cathareena Nadakam",the victory of the Isaac etc. were the themes. In 19th century moral themes like "Sathyapalan";"Njanasundhari","Komala Chandrika"were handled. 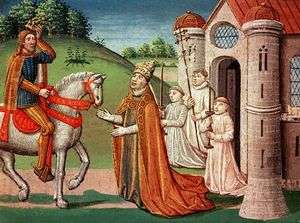 The Frankish King Charlemagne was a devout Latin Catholic. Shown here, the Pope asks Charlemagne for help at a meeting near Rome