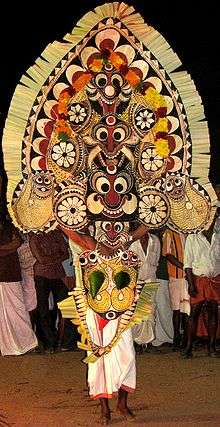 Padayani, also called Padeni, (from the Malayalam word for military formations) is a traditional folk dance and a ritual art[1] from the central portion of the Indian state of Kerala. A ceremonial dance involving masks, it is an ancient ritual performed in Bhagavati temples.[2] The dance is performed in honor of Bhadrakaali.[3] Meaning, a 'row of warriors', Padayani is an art form that blends music, dance, theatre, satire, facial masks, and paintings. It is part of worship of Bhadrakali and is staged in temples dedicated to the goddess from mid-December to mid-May. Padayani is unique to central Travancore, comprising the Pathanamthitta district of Kerala. Padayani is regarded as a remnant of the Dravidian forms of worship that existed before the advent of Brahmanism.[4]

Padyani is a modern form of Kolam Thullal, a ritual dance, which had been performed by the magico-medicine men of Kerala ( The Tinta endogamous section of Ganaka community ) .[5] In olden days, this elaborate and expensive event was carried out to heal illnesses of deep psychological dysfunctions without any identifiable serious physical cause, and cases that seemed to be not amenable to medical modalities of intervention .[6] This form of psychic or spiritual healing other wise known as Kolam Thullal, was solely designed, controlled and performed by the Tinta sub sect of the Ganaka community, as a method of exorcism[7] The folk art, Padayani made its development from this dance performance, as a divine ritual tradition in association with festival occasions of Bhagavathy (Bhadrakaali) temples of Kerala.[8][9]

Another version of its origin is related to the practice of ancient martial arts training in Kerala. Ever since the period of the Samgham age, the Ganaka people were regarded by the society, as traditional preceptors (Sanskrit: Acharya) of martial arts and letters . Since the origin of term padayani relates to military parade or rows of army,[10][11] it is generally believed that it is evolved from a symbolic past reminiscent of the fencing march of the martial art (Kalari) [12] by the Nair trainees (fighters) and their Preceptors -Kalari Asans (Kaniyar Panicker) to frighten the enemy troop and to show their might. Eventually the responsibilities of various functions related to this dance were divided and assigned among people of different communities. So the Nair folk became the performers of the modern form of Padayani art, but the right of writing lyrics, the design and making of elaborate costumes was vested with the local Kaniyar people. Nowadays the modern form of Padayani is performed at many Devi temples in the southern region of Kerala, particularly in Pathanamthitta, Kottayam, Alappuzha and Kollam Districts

Padayani is very popular in Kerala, India, as a means, used to worship goddess Kali. The story line comes as after killing Daruka, an Asura, the goddess was very angry. The bhoothagana, servants of lord Siva, danced in front of her to reduce her anger, else her anger would result in the destruction of the whole world. In memory of this incident, the participants wear masks (kolam) made of lathes of the areca tree using one to hundreds. The colours used to make the kolam are purely natural. They are made of the green of the lath itself (kamukin pacha), kari (carbon), manjalpodi, sindooram, etc.

A major attraction of padayani is the song associated with it. Traditionally only a single type of instrument is used to associate the song, thappu. The songs are in simple Malayalam and have been handed down from the ancestors over the years.

Marutha is the little ones and they are like a drama. They are dancing to make fun along with the songs. The kolam is performed by men as well as children.

Kalan Kolam is the major attraction in padayani. This is about a child who is begging for his life with lord Siva, while death comes on his 16th birthday. At that time Kalan, the god of death, comes and he is trying to take the life of Markandaya, the boy.

Bhairavi kolam is the dance to worship the goddess. It is the biggest kolam and uses many laths of the areca tree. The kolam is headed by more than one person due to its heavy weight.

After the kolam thullal is over, there will be ritual called Pooppada which is the end of the padayani festival. After that, the days of colours will be over and the colourful memories will be in the minds.

The waiting for the next padayani starts then...with a prayer for the wellness of all world....

In 2007, plans were put forward to implement a proposal by poet Kadammanitta Ramakrishnan to create a Padayani Village to promote the dance form.[13] As of 2009, the first such village is expected to be built in the poet's hometown of Kadammanitta at a cost of Rs. 1.9 crore.[3] A chief exponent of Padayani is Prof. Kadammanitta Vasudevan Pillai. His association and acquaintance with Kadammanitta Ramakrishnan has led to many literary contributions. His Literary work "Padayaniyude Paalakolangal" and "Padayani" is an authoritative work on Kerala Folklore with special reference to Padayani.

"Kottangal Padayani" is being performed along with the 8 (Ettu padayani) days from a total of 28 days during January - February(Makara Bharani). This is performed every year at Kottangal Devi Temple located in the boundary of Kottayam and Pathanamthitta Districts. The last 8 days are important with the performance of different Kolams and other traditional programs. The padayani is done by two Karas(Areas which contains different sub areas) Kottangal and Kulathoor. The Last 8 days are equally divided to two karas that is 4 for each. The last two days(valiya Padayani) are most important for both Karas and they conduct programs in a competitive manner. Beautiful Processions will be there on the evening of last two days. The main programs include vela Kali,Adavi, Pallippana, Vellam Kudi, vinodam and kolam Thullal. The kolams performed in the padayani are Ganapathi Kolam, Kuthira, Bhairavi, Sundara Yakshi, Araki Yakshi, Marutha, Pakshi, Kalamadan and Kalan Kolam.

"Kadammanitta Padayani" is being performed along with the 10 days long Pathamudaya Maholsavam at Kadammanitta Devi Temple during March - April ( from 1-10 of medam month in Malayalam Calendar) of every year. Medam 8th is popular for Grand padayani (Vellya Padeni)when all "kolams" under padayani will be performed by experts, and large number of people interested, from all over the country as well as a few foreigners who are regular visitors every year will come to see the magnificent performances, apart from many prominent cultural and social leaders.

Padayani is being performed as an offering to Goddess Kali (Devi) and often portrays the story of Goddess winning victory over Daarikan, an evil character. This ritual festival is famous in Kadammanitta village in Pathanamthitta district.

"Kallooppara Padayani" is being performed at Kallooppara Devi Temple in Kallooppara village, 8 kilometers from Thiruvalla, located between Thiruvala and Mallappally. It is held in the month of February–March(Kumbha maasam) as part of the Kumbhabharani Festival. Here, Padayani is celebrated in Revathy and Aswathy of Kumbha Masam. Several artists perform this art as a worship to the Goddess,Bhadrakali. The main Kolams performed are Yakshi, Pakshi, Marutha,Bhairavi and Kalan Kolam. Along with these, Vinodam also being performed.