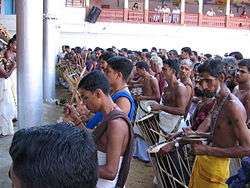 Panchari Melam is a percussion ensemble, performed during temple festivals in Kerala, India. Panchari Melam (or, simply, panchari), is one of the major forms of chenda melam (ethnic drum ensemble), and is the best-known and most popular kshetram vadyam (temple percussion) genre. Panchari melam, comprising instruments like chenda, ilathalam, kombu and kuzhal, is performed during virtually every temple festival in central Kerala, where it is arguably presented in the most classical manner. Panchari, however, is also traditionally performed, with a touch of subtle regional difference, in north (Malabar) and south-central Kerala (Kochi). Of late, its charm has led to its performance even in deep-south Kerala temples.

Panchari is a six-beat thaalam (taal) with equivalents like Roopakam in south Indian Carnatic music and Daadra in the northern Hindustani classical.

Another chenda melam which comes close to panchari in prominence and grammatical soundness, is Pandi Melam, performed outside temple precincts in general. Other chenda melams, though less popular, are chempata, adanta, anchatanta, dhruvam, chempha, dhruvam, navam, kalpam and ekadasam. Though there are expressional differences between the panchari and the above-mentioned melams (other than pandi), the description of the former is proto-typical for the rest of them.

Panchari melam is performed either in its elaborate form (during annual temple festivals) or in its sketchy detail (to accompany the daily or weekly temple rituals). Either ways, they are performed only within the walls of the temple. The Panchari Melam represents "Satthva Guna", and elevates listeners to higher pedestals.

The ensemble starts at the main entrance to the inner part of the temple, slowly circling the shrine clockwise while playing. A panchari melam has five stages, each of them based on beats totalling 96, 48, 24, 12 and 6 respectively. The first phase of the Panchari Melam, also called the "Pathikaalam" stands out for its unique blend of percussion and noted from the Kuzhal. The crescendo rises higher with each phase, eventually culminating in the fifth phase with a 6-beat cycle. For the culmination of the fifth phase, a unique 3-beat cycle called "Muri-Panchari" is also employed to take the Melam to an apt conclusion. The Melam thus starts with a broad base, and progresses completing the pyramid structure, culminating at the apex.

The semi-circular procession, with caparisoned elephants totalling between three and fifteen generally), is led by the deity of the temple kept on tusker in the centre. (In a pure ritualistic case, the idol is carried by the Namboodiri priest himself). The deity faces the musical ensemble and devotees/melam buffs, the latter surrounding the musicians and following the progress of the melam. 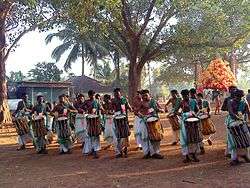