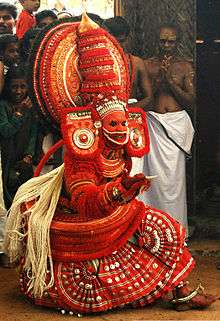 Bali Theyyam from a Kavu in Payyanur

Theyyam from a Kavu in Payyanur 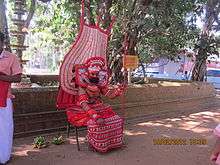 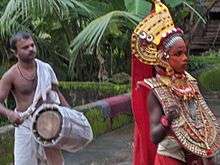 Theyyam (Teyyam, Theyyattam ) (Malayalam:തെയ്യം) is a popular ritual form of worship of North Malabar in Kerala, India, predominant in the Kolathunadu area (consisting of present-day Kasargod, Kannur Districts, Mananthavady Taluk of Wayanad and Vatakara and Koyilandy Taluks of Kozhikode of Kerala) and also in Kodagu and Tulu nadu of Karnataka as a living cult with several thousand-year-old traditions, rituals and customs. The performers of Theyyam belong to the lower caste community, and have an important position in Theyyam.People of these districts consider Theyyam itself as a God and they seek blessings from this Theyyam. A similar custom is followed in the Tulu Nadu region of neighbouring Karnataka known as Bhuta Kola.

"There can be no doubt", say Bridget and Raymond Alchin, "that a very large part of this modern folk religion is extremely ancient and contains traits which originated during the earliest periods of Neolithic, Chalcolithic settlement and expression" mainly there is no doubt, giving from fremin.[1]

It can be said that all the prominent characteristics of primitive, tribal, religious worship had widened the stream of Theyyam cult, where "even the followers of Islam are associated with the cult in its functional aspect"[2] and made it a deep-rooted folk religion of millions. For instance, the cult of Bhagawathi, the Mother Goddesses had and still has an important place in Theyyam. Besides this, the practices like spirit-worship, ancestor-worship, hero-worship, masathi-worship, tree-worship, animal worship, serpent-worship, the worship of the Goddesses of disease and the worship of Graamadhevataa (Village-Deity) are included in the mainstream of the Theyyam cult. Along with these Gods and Goddesses there exist innumerable folk Gods and Goddesses. Most of these Goddesses are known as Bhagavathy (the Mother-Goddess that is the Divine and United form of the three principal Goddesses namely, Brahmani (Saraswati), Vaishnavi (Lakshmi), and Shivani (Durga)).

Different branches of mainstream Hindu religion such as Shaktism, Vaishnavism and Shaivism now dominate the cult of Theyyam. However, the forms of propitiation and other rituals are continuations of a very ancient tradition. In several cult-centres, blood offering is seen, despite being forbidden in sattvic Hinduism, Jainism and Buddhism. In such centres, separate places outside the precincts of the shrine are selected for blood offering and for the preparation of the traditional Kalam known as Vatakkanvathil. The Theyyam deities propitiated through cock-sacrifice will not enter such shrines. This religious cockfight over blood sacrifice, which does also include the cockfight as a blood sacrifice, is a prime example of "cultural synthesis of 'little' and 'great' cultures".[3]

On account of the supposedly late revival of the Vaishnavism movement in Kerala, it does not have a deep impact on the Theyyam cult. Only a few deities are available under this category. Two major Theyyam deities of Vaishnavism are Vishnumoorthi and Daivathar. Vaishnavism was very popular in the Tuluva region in the 13th century when it came under the rule of Vishnuvardhana of the Hoysala dynasty. He was a great champion of Vaishnavism. Most probably he was initially deified as Vishnumoorthi and incorporated into the Bhoota cult of the Tuluvas and then further incorporated as a prominent folk deity into the Theyyam cult as well. To some, the legend of Vishnumoorthi is symbolizes the God's migration from Tulu Nadu to Kolathunadu.

All other categories of Theyyam deities can be classified under Shaivism or Shaktism. Even spirits, ancestors, heroes, and animals are deified and included in those categories. Briefly, Theyyam provides a good example for the religious evolution of, and the subsequent different stages in modern Hinduism, with the overall understanding that within Hindu sycretisms lay propitiation as ancient practices and rituals of ancient worship intended for the blessings of the supernatural not unlike, "in Indus Valley and other ancient civilizations, mother goddess had been invoked for fertility and prosperity".[4]

Out of devotion, ruling clans established their own shrines and Kavus for Theyyam deities where non-sattvic rituals and customs are observed. The Goddesses like Rakteshwari, Chamundi, Someshwari, Kurathi, and the Gods like Vishnumoorthi are propitiated in these household shrines. There, the Theyyam dancers appear during the annual festivals of Gods and Goddesses. The rituals in such shrines are different from those of the Brahminical temples. The impact of this cultural fusion could be traced to the social organization based on the caste system and in the agrarian relations. The inviting of Brahmin Thanthri to consecrate the idols of Kavu started very recently. Except the Non-Brahminical communities and those like Nair and Nambiar who supported Brahminical supremacy, other castes especially Thiyyas took it as a "major religious practice".[5] 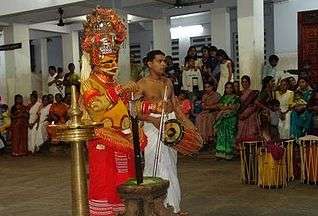 The dance or invocation is generally performed in front of the village shrine. It is also performed in the houses as ancestor-worship with elaborate rites and rituals.

There is no stage or curtain or other such arrangements for the performance. The devotees would be standing or some of them would be sitting on a sacred tree in front of the shrine. In short, it is an open theatre. A performance of a particular deity according to its significance and hierarchy in the shrine continues for 12 to 24 hours with intervals. The chief dancer who propitiates the central deity of the shrine has to reside in the rituals. This may be due to the influence of Jainism and Buddhism. Further, after the sun sets, this particular dancer would not eat anything for the remainder of that day (again possibly on account of a legacy of Jainism). His make-up is done by specialists and other dancers. The first part of the performance is usually known as Vellattam or Thottam. It is performed without proper make-up or any decorative costume. Only a small, red headdress is worn on this occasion. 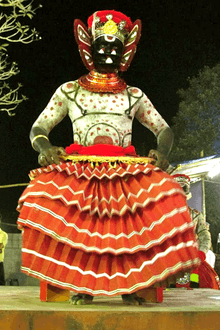 The dancer along with the drummers recites the particular ritual song, which describes the myths and legends, of the deity of the shrine or the folk deity to be propitiated. This is accompanied by the playing of folk musical instruments. After finishing this primary ritualistic part of the invocation, the dancer returns to the green room. Again after a short interval he appears with proper make-up and costumes. There are different patterns of face-painting. Some of these patterns are called vairadelam, kattaram, kozhipuspam, kottumpurikam, and prakkezhuthu. Mostly primary and secondary colours are applied with contrast for face painting. It helps in effecting certain stylization in the dances. Then the dancer comes in front of the shrine and gradually “metamorphoses” into the particular deity of the shrine. He, after observation of certain rituals places the head-dress on his head and starts dancing. In the background, folk musical instruments like chenda, tudi, kuzhal and veekni are played in a certain rhythm. All the dancers take a shield and kadthala (sword) in their hands as continuation of the cult of weapons. Then the dancer circumambulates the shrine, runs in the courtyard and continues dancing there. The Theyyam dance has different steps known as Kalaasams. Each Kalaasam is repeated systematically from the first to the eighth step of footwork. A performance is a combination of playing of musical instruments, vocal recitations, dance, and peculiar makeup (usually predominantly orange) and costumes.

There are approximately 400 types of Theyyam, including Pallivettakkorumakan, Vishnumoorthy and Sree Muthappan Theyyam. 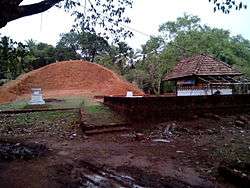 A Madappura (stand alone Kovil)where Theyyam rituals are performed seasonally. All the Muthappan Madappura's are structured in similar style. These structures are found mainly in North Malabar region of Kerala

A Muslim Theyyam is performed in the temples of Malom town in Kasaragod district. Malom#Muslim_Theyyam