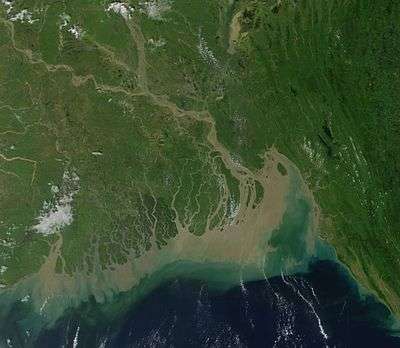 The Ganges-Brahmaputra Delta in Bangladesh low landed country (also known as the Brahmaputra Delta,[1] the Sunderbans Delta, or the Bengal Delta[2]) and in West Bengal (India) is a river delta in the South Asia region of Bengal, consisting of Bangladesh and the state of West Bengal. It is the world's largest delta, and empties into the Bay of Bengal. It is also one of the most fertile regions in the world, thus earning the nickname The Green Delta. The delta stretches from the Hooghly River on the west to the Meghna River on the east. It is approximately 354 km (220 mi) across at the Bay of Bengal.[1] Kolkata (formerly Calcutta) and Haldia in India and Mongla and Chittagong in Bangladesh are the principal seaports of the delta.

A typical landscape in the Delta with palms, rice, flat, green and ponds. 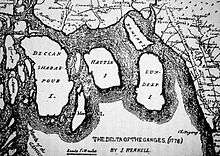 Delta of Ganges from the map of surveyor James Rennell (1778)

The Ganges Delta has the shape of a triangle, and is considered to be an "arcuate" delta (arc-shaped). It covers more than 105,000 km2 (41,000 sq mi), and although the delta lies mostly in Bangladesh and India, rivers from Bhutan, China, India, and Nepal drain into it from the north. Approximately two-thirds of the delta is in Bangladesh. Most of the delta is composed of alluvial soils made up by small sediment particles that finally settle down as river currents slow down in the estuary. Rivers carry these fine particles with them, even from their sources at glaciers as fluvio-glacial. Red and red-yellow laterite soils are found as one heads farther east. The soil has large amounts of minerals and nutrients, which is good for agriculture.

It is composed of a labyrinth of channels, swamps, lakes, and flood plain sediments (chars). The Gorai-Madhumati River, one of the distributaries of the Ganges, divides the Ganges Delta into two parts: the geologically young, active, eastern delta, and the older, less active, western delta.[2]

Between 125 and 143 million people live on the delta, despite risks from floods caused by monsoons, heavy runoff from the melting snows of the Himalayas, and tropical cyclones. A large part of the nation of Bangladesh lies in the Ganges Delta, and many of the country's people depend on the delta for survival.[3] 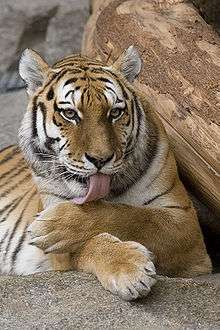 Three terrestrial ecoregions cover the delta. The Lower Gangetic plains moist deciduous forests ecoregion covers most of the delta region, although the forests have mostly been cleared for agriculture and only small enclaves remain. Thick stands of tall grass, known as canebrakes, grow in wetter areas. The Sundarbans freshwater swamp forests ecoregion lies closer to the Bay of Bengal; this ecoregion is flooded with slightly brackish water during the dry season, and fresh water during the monsoon season. These forests, too, have been almost completely converted to intensive agriculture, with only 130 square kilometres (50 sq mi) of the ecoregion's 14,600 square kilometres (5,600 sq mi) protected. Where the delta meets the Bay of Bengal, Sundarbans mangroves form the world's largest mangrove ecoregion, covering an area of 20,400 square kilometres (7,900 sq mi) in a chain of 54 islands. They derive their name from the predominant mangrove species, Heritiera fomes, which are known locally as sundri or sundari.

Animals in the delta include the Indian python (Python molurus), clouded leopard (Neofelis nebulosa), Indian elephant (Elephas maximus indicus) and crocodiles, which live in the Sundarbans. Approximately 1,020 endangered Bengal tigers (Panthera tigris tigris) are believed to inhabit the Sundarbans. The Ganges–Brahmaputra basin has tropical deciduous forests that yield valuable timber: sal, teak, and peepal trees are found in these areas. The delta region has mangrove trees.

It is estimated that 30,000 chital (Axis axis) are in the Sundarbans part of the delta. Birds found in the delta include kingfishers, eagles, woodpeckers, the shalik (Acridotheres tristis), the swamp francolin (Francolinus gularis), and the doel (Copsychus saularis). Two species of dolphin can be found in the delta: the Irrawaddy dolphin (Orcaella brevirostris) and the Ganges river dolphin (Platanista gangetica gangetica). The Irrawaddy dolphin is an oceanic dolphin which enters the delta from the Bay of Bengal. The Ganges river dolphin is a true river dolphin, but is extremely rare and considered endangered.

The Ganges Delta lies at the junction of three tectonic plates: the Indian Plate, the Eurasian Plate, and the Burma Plate.[4] The edge of the Eocene paleoshelf runs approximately from Kolkata to the edge of the Shillong Plateau. The edge of the paleoshelf marks the transition from the thick continental crust in the northwest to the thin continental or oceanic crust in the southeast. The enormous sediment supply from the Himalayan collision has extended the delta about 400 kilometres (250 mi) seaward since the Eocene. The sediment thickness southeast of the edge of the paleoshelf beneath the Ganges Delta can exceed 16 kilometres (9.9 mi).[5]

Rice, cattle and fishing in rivers and ponds are important sources of food.

Approximately two-thirds of the Bangladesh people work in agriculture, and grow crops on the fertile floodplains of the delta. The major crops that are grown in the Ganges Delta are jute, tea, and rice.[3] Fishing is also an important activity in the delta region, with fish being a major source of food for many of the people in the area.[6]

In recent years, scientists have been helping the poor people of the delta to improve fish farming methods. By turning unused ponds into viable fish farms, and improving methods of raising fish in existing ponds, many people can now earn a living raising and selling fish. Using new systems, fish production in existing ponds has increased 800%.[7] Shrimp are farmed in containers or cages that are submerged in open water. Most are exported.[6]

A lot of bustle at a ferry pier

The Vidyasagar Setu which spans the Hoogli River in Kolkata

As there is a maze of many river branches, the area is difficult to pass. Most islands are only connected with the mainland by simple wooden ferryboats. Bridges are rare. Some islands are not yet connected to the electric grid, so island residents tend to use solar cells for a bit of electric supply.

In November 1970, the deadliest tropical cyclone of the twentieth century hit the Ganges Delta region. The 1970 Bhola cyclone killed 500,000 people (official death toll), with another 100,000 missing. The Guinness Book of World Records estimated the total loss of human life from the Bhola cyclone at 1,000,000.[8]

People have to be careful on the river delta as severe flooding also occurs. In 1998, the Ganges flooded the delta, killing about 1,000 people and leaving more than 30 million people homeless. The Bangladesh government asked for $900 million to help feed the people of the region, as the entire rice crop was lost.[10]

Future of the delta

One of the greatest challenges people living on the Ganges Delta may face in coming years is the threat of rising sea levels caused by climate change. An increase in sea level of 0.5 metres (1 ft 8 in) could result in six million people losing their homes in Bangladesh.[11]

Important gas reserves have been discovered in the delta, such as in the Titas and Bakhrabad gas fields. Several major oil companies have invested in exploration of the Ganges Delta region.[12][13] 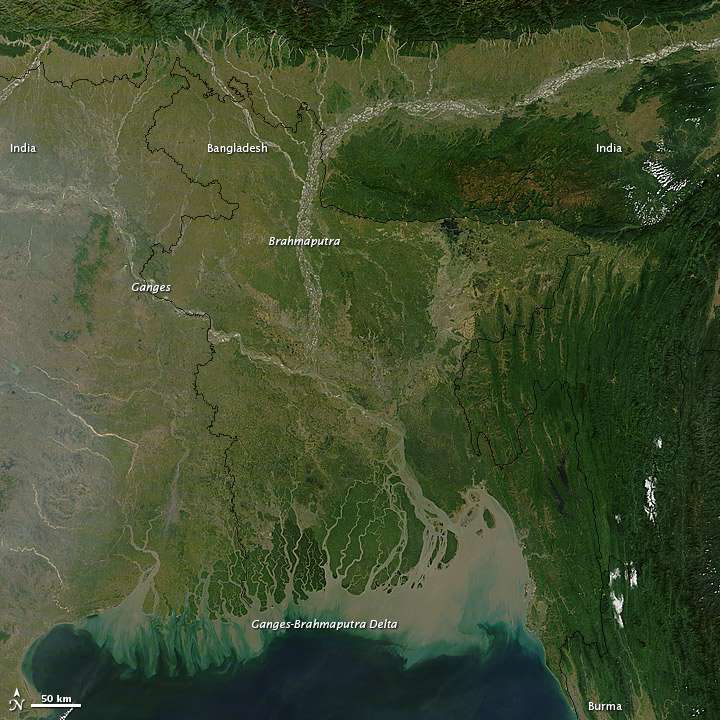