Chuo was founded as the English Law School (英吉利法律学校, Igirisu Hōritsu Gakkō) in 1885 at Kanda in Tokyo by a group of lawyers. Before 1889, the school moved and was renamed to Tokyo College of Law (Tokyo Hōgakuin). The curriculum was changed to reflect the government reform of Japanese law and creation of a new civil code. Opposition to the implementation of new civil code resulted in the government shuttering of the campus journal and the subsequent creation of the Chuo Law Review (Hōgaku Shinpo), which has been regularly published since then.

The university was burnt down in the Great Kanda Fire that occurred in 1892, but was able to hold temporary classes. Before 1903, the school was promoted to Tokyo University of Law (Tokyo Hōgakuin Daigaku) and in 1905, the school expanded itself with the department of economics and renamed itself Chuo University.

The origin of its name "Chuo" has not been certain. However, many founders of the university were once students of the Middle Temple, London, United Kingdom before they completed their training and became qualified as Barristers. This is one of the reasons why the university renamed "Chuo" with its literally meanings: Middle, Center or Central.

Another fire torched the campus in June 1917, but it was rebuilt in August 1918.

The 1923 Great Kantō earthquake again reduced the campus to rubble and it was rebuilt and relocated at Kanda-Surugadai in 1926.

In 1944, Engineering College was established.

In 1978, Chuo University's headquarters, four faculties and graduate schools including laws, economics, commerce and arts moved to newly established Tama Campus in Hachiōji from the Kanda-Suguradai Campus. The Faculty of Science and Engineering and its Graduate School are still located at the Korakuen Campus. For celebrating its 100th anniversary, in 1988, Chuo University built the Surugadai Memorial Hall which is a seven-story building. It is located at a section on the old Kanda-Surugadai Campus.

In 1993, the Faculty of Policy Studies was opened on the Tama Campus.

In 2008, Chuo Graduate School of Strategic Management, which is a professional graduate school, was launched at Korakuen Campus. Faculty of Literature was renamed to Faculty of Letters.

The Ichigaya-Tamachi Campus in Shinjuku was opened in 2010. CGSA and the Graduate School of Public Policy have moved to this campus.

In 2010, Chuo University celebrated its 125th anniversary and the other university events including the main ceremony were held on November 13. 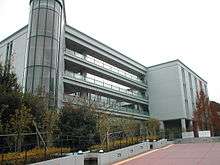 This, the main campus, is a short walk from the Chūō-Daigaku-Meisei-Daigaku Station of the Tama Monorail, easily reachable from the JR Chūō, Keiō or Odakyū line.

It contains headquarters, all the faculties except for the Faculty of Science and Engineering, five graduate schools including law, economics, commerce, arts and policy studies.

It contains the Faculty of Science and Engineering and its graduate school and the Graduate School of Strategic Management (professional graduate school).

This too is in Shinjuku ward, Tokyo. It is near Ichigaya Station (JR Chūō-Sōbu Line, Shinjuku, Namboku, and Yūrakuchō subway lines).

This is in Chiyoda ward, Tokyo. It can be reached from Ochanomizu Station (JR Chūō-Sōbu Line and Marunouchi subway line).

Institute of Comparative Law in Japan

This was established as the first research institute for comparative legal studies in Japan and East Asia. Its academic research journal Hikakuhō Zasshi is one of the most prestigious academic journals in this field. Its office and library are on Tama Campus.

This was established in 1964. Its research covers microeconomics, macroeconomics and Marxian economics.

This was established in 1979. Its research covers a wide range of social sciences including politics, applied policy studies, area studies and modern histories.

The Japanese name of this institute is "Kigyō Kenkyūjo", literally Institute for Business Entity Analysis. It was established in 1979. It is very famous for its large collection of material on Japanese corporations or business entities.

The Japanese name of this institute is "Jinbun-kagaku Kenkyūjo", literally Institute of Humanities. The research undertaken by the Institute is primarily collaborative, and involves study of cultural sciences in their broadest sense.

Institute of Health and Sports Science

This was established in 1978. Its main office and laboratories are in the main Gymnastic Building on Tama Campus.

Institute of Science and Engineering

The institute, established in 1992, promotes joint and project research in science and technology. Its office is on Korakuen Campus.

The institute was established in 1996 for promoting applied research in policy studies.

This institute was founded in 1948, for researching practice and theory of corporate accounting, tax, and legislation and/or regulation on business entities. In 1979, Chuo decided to separate it into two. A new Institute of Business Research succeeded research functions and the Institute of Accounting Research changed its function into research-based education in accounting. The institute offers various courses for students who would like to be qualified as CPA or tax accountant, or to became business professionals empowered by the knowledge of accounting.

"21st Century Center of Excellence" (COE) program is the Japanese government's special support program for establishing top research centers within research universities. Chuo had this support from 2002 to 2006 for its "Research on Security and Reliability in Electronic Society". Combining cryptographic technologies and other social engineering methods including legal studies, Chuo contributed to society on this matter.[2]