The Chūō Line (Rapid) (中央線快速, Chūō-sen kaisoku) is the name given to rapid services on the eastern section of the Chūō Main Line operated by the East Japan Railway Company (JR East) between Tokyo and Takao stations.

Although the Chūō Line (Rapid) designation only refers to the section between Tokyo and Takao stations, many trains continue on past Takao to Ōtsuki. These include both limited express and various special rapid services. For details, see the Chūō Main Line article. In addition, Chūō Line (Rapid) trains do not stop at some stations between Ochanomizu and Nakano stations; for information on those services, see the Chūō-Sōbu Line article.

The Chūō Line (Rapid) uses the two express tracks on the four-track section between Ochanomizu and Mitaka stations. Past Mitaka, trains use both tracks on the remaining double-track section. Since the express tracks do not have platforms at several stations in central Tokyo, even the slowest services of the Chūō Line (Rapid) skip such stations and are therefore called "Rapid" (快速). In addition to the basic type of "Rapid", there are some variations of the service types with fewer stops.

Rapid
This service is the most common on the Chūō Line (Rapid) route; they stop at all stations west of Nakano. After Nakano, it stops at Shinjuku, Yotsuya, Ochanomizu, and Kanda stations before arrival in Tōkyō Terminal. On weekends and holidays, trains do not stop at Asagaya, Kōenji, or Nishi-Ogikubo stations. The signature color of the rolling stock, station signs and line diagrams is orange (■). 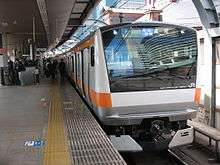 Commuter Rapid
Commuter Rapid service operates weekday evening. The service's signature color on service diagrams is purple (■). It stops at Ogikubo and Kichijōji in addition to the stops of Chūō Special Rapid.

Commuter Special Rapid
Weekday morning services for Tokyo; two from Ōtsuki, two from Ōme and one from Takao. It stops at all stations until Takao, Hachiōji, Tachikawa, Kokubunji, and Shinjuku and continues as a rapid service from Shinjuku. Services from Ōme from the Ōme Line stops at all stations on the Ōme Line. The service's signature color on service diagrams is pink (■).

The Chūō Liner and Ōme Liner services run on weekday peak periods only. There is one Chūō Liner from Takao for Tokyo in the morning and six in the evenings from Tokyo for Takao and Hachioji and in the past terminating in Ōtsuki. The Ōme Liner has one service during the morning from Ōme and two in the evening from Tokyo. Unlike other rapid services, the Chūō/Ōme Liners require the purchase of a liner ticket in addition to the base fare; all seats are unreserved, but the number of liner tickets sold is limited to the number of seats available. Liner services are provided by E257 series 11-car or 9-car EMUs (introduced in July 2002) and E351 series 12-car EMUs (introduced in March 2008). 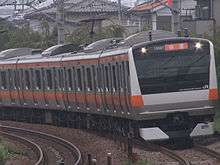 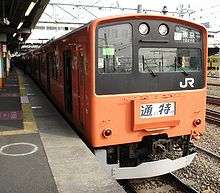 Rolling stock used in past

Most of the route of the Chūō Line (Rapid) was built by the Kōbu Railway and later acquired by the Japanese Government Railways in 1906.

Operation of electric multiple unit (EMU) trains on the Chūō Main Line began in 1904. By 1930, the EMU service had reached Tokyo to the east and Asakawa (now Takao) to the west. In 1933, two tracks were added to the existing double-tracked section between Ochanomizu and Iidamachi stations (later closed) to complete the four-track line between Ochanomizu and Nakano. On these additional tracks, express trains (急行電車, kyūkō densha), which skipped all stations except Yotsuya and Shinjuku, were introduced the same year. The express service was renamed "Rapid" (快速, kaisoku) service in March 1961.

The Chuo Rapid Line is known for a high number of suicides, primarily due to the high speed at which some trains pass through stations on the line.[2]