The Toei Ōedo Line (都営地下鉄大江戸線, Toei Chikatetsu Ōedo-sen) is a subway line in Tokyo, Japan, operated by the Tokyo Metropolitan Bureau of Transportation (Toei). It commenced full operations on December 12, 2000; using the Japanese calendar this reads "12/12/12" as the year 2000 equals Heisei 12. The line is completely underground, making it the second-longest railway tunnel in Japan after the Seikan Tunnel.

On maps and signboards, the line is shown in "magenta" (O). Stations carry the letter "E" followed by a two-digit number.

The Ōedo Line is Tokyo's first linear motor metro line (and the second in Japan after the Nagahori Tsurumi-ryokuchi Line in Osaka), which allows it to use smaller cars and smaller tunnels. The line is deep (as low as 48 meters below ground at points) through central Tokyo, including three underground crossings of the Sumida River. Originally budgeted at ¥682.6 billion and 6 years, the construction ended up taking nearly 10 years and estimates of the final cost of construction range from the official ¥988.6 billion to over ¥1,400 billion yen, making it the most expensive subway line ever built.[2] (Yokohama's Minato Mirai Line, however, was even costlier if measured per kilometer.)

Ridership projections originally estimated 1 million users daily, a figure scaled down to 820,000 before opening. At the end of 2006, the line was averaging 720,000 passengers/day.[3] However, its ridership has increased by about five percent each year since its opening, following new commercial and residential development around major stations such as Roppongi and Shiodome. According to the Tokyo Metropolitan Bureau of Transportation, as of June 2009 the Ōedo Line was the fourth most crowded subway line in Tokyo, at its peak running at 178% capacity between Monzen-Nakachō and Tsukishima stations.[4]

There are plans to extend the Ōedo Line westward from its current western terminus at Hikarigaoka Station through to a new terminus in Ōizumigakuenchō, 1.5 km north of Ōizumi-gakuen Station (on the Seibu Ikebukuro Line) then later towards Higashi-Tokorozawa Station (on the Musashino Line). Construction of the first segment to Ōizumigakuenchō is tentatively scheduled for before 2015, and will include the construction of three new stations, temporarily named Doshida station, Ōizumichō station and Ōizumigakuenchō station.[5] Following the awarding of the 2020 Summer Olympics to Tokyo, there has been speculation regarding the addition of another 2.7 km to the proposed extension in order to extend the line to Niiza where the shooting range for the Olympics is to be located. A decision regarding this matter is expected in 2015.[6]

The Ōedo Line runs in a loop around central Tokyo before branching out towards Nerima in the western suburbs, meaning the line is shaped like a figure of 6 lying on its side. It is not a true loop line: trains from the western Hikarigaoka terminus run anticlockwise around the loop and terminate at the intermediate Tochōmae Station facing towards Hikarigaoka, and vice versa.

The full 40.7 km trip from Tochōmae around the loop and onward to Hikarigaoka takes 81 minutes. Trains operate once every three to five minutes during rush hours, and once every six minutes during off-peak weekday hours, weekends and holidays.[7] 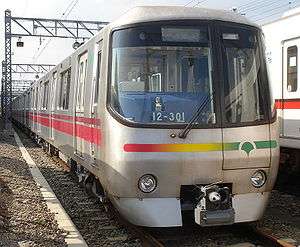 Oedo Line trains are housed and maintained at the Kiba depot, located underneath Kiba Park to the southeast of Kiyosumi-Shirakawa Station. Prior to the completion of the Oedo Line loop in 2000, servicing was performed at a depot near Hikarigaoka Station.

Major overhaul work for Oedo Line trains is performed at the Magome depot, located south of Nishi-Magome Station on the Toei Asakusa Line. Oedo Line trains access this facility using a connecting tunnel to the Asakusa Line near Shiodome Station. Because of the difference in power systems used on the two lines, a special Toei Class E5000 locomotive powers these ferry runs during overnight hours when the subway is closed.

The Ōedo Line was first proposed in 1968 as an incomplete loop line from Shinjuku around northern and eastern Tokyo to Azabu. This plan was amended in 1972 to complete the loop back to Shinjuku, extend it to Hikarigaoka and add a spur line to Mejiro from the northern side. The Tokyo Metropolitan Government undertook construction of the line, which was initially called Toei Line 12 (都営地下鉄12号線, Toei Chikatetsu Jūnigō-sen).

The first segment from Hikarigaoka to Nerima began operations on December 10, 1991. The line was extended from Nerima to Shinjuku on December 19, 1997, and later to from Shinjuku to Kokuritsu-Kyōgijō on April 20, 2000.

With this extension, Shintaro Ishihara, the governor of Tokyo, named the line Toei Ōedo Line, where Ōedo literally means "Great Edo", a reference to Tokyo's former name. As was the case with earlier lines, the public was initially polled to select a name; however, Ishihara rejected the chosen name, Tokyo Loop Line (東京環状線, Tōkyō Kanjō-sen), on the grounds that it would not initially form a complete loop, and that calling it such would cause confusion with the Yamanote Line and the Osaka Loop Line.

The full line began operation on December 12, 2000. An additional station (Shiodome Station) was opened on November 2, 2002 to connect to the Yurikamome guideway transit line. Following the addition of Shiodome, the automated announcements in the trains were changed to advertise businesses and facilities near each station, a first in Tokyo (although this was already the practice on the municipal subways of Osaka and Nagoya).