Bunkyō (文京区, Bunkyō-ku) is a special ward located in Tokyo, Japan. Situated in the middle of the ward area, Bunkyō is a residential and educational center. Beginning in the Meiji period, literati like Natsume Sōseki, as well as scholars and politicians have lived there. Bunkyō is home to the Tokyo Dome, judo's Kodokan, and the University of Tokyo (Hongo Campus). The English translation of its Japanese self-designation is Bunkyō City. Bunkyō has a sister-city relationship with Kaiserslautern in the Rhineland-Palatinate of Germany.[1] 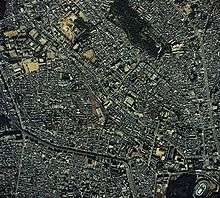 There are approximately twenty neighbourhoods in the area and these are as follows:

Bunkyo is governed by mayor Hironobu Narisawa, an independent supported by the Liberal Democratic Party, Democratic Party of Japan and Komeito.[2] The city council has 34 elected members.[3] 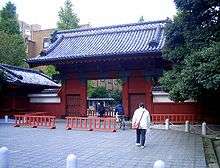 Akamon gate at the University of Tokyo 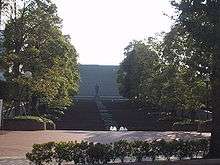 The metropolis operates the Bunkyo School for the Blind.[14]