For other uses, see Kanda (disambiguation). 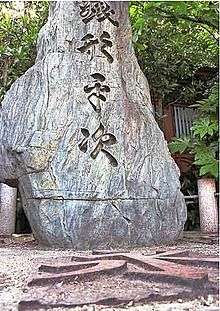 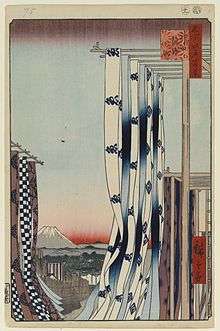 Kanda (神田) is a district in Chiyoda, Tokyo, Japan. It encompasses about thirty neighborhoods. Kanda was a ward prior to 1947, when the 35 wards of Tokyo were reorganized into 23.

It is home to the Kanda Myojin (Shinto) shrine, devoted to Taira no Masakado, who led a rebellion against the central government during the Heian period. In the Edo period, the shrine's festival was one of the three most famous in the city.

Kanda is also the home of the Tokyo Resurrection Cathedral which was built by Nicholas of Japan and is the main Cathedral of the Japanese Orthodox Church.

A popular Japanese television series, Zenigata Heiji, features a fictitious police patrolman (the title character) whose beat is Kanda. Near the end of every show, Heiji fells the dastardly villain by throwing a coin at him.

This article is issued from Wikipedia - version of the 3/1/2015. The text is available under the Creative Commons Attribution/Share Alike but additional terms may apply for the media files.