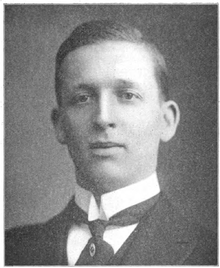 Clarence J. Brown, Sr. (July 14, 1893 – August 23, 1965) was an American newspaper publisher and politician; he represented Ohio as a Republican in the United States House of Representatives from 1939 until his death in Bethesda, Maryland in 1965. Long representing conservative views, near the end of his life, he helped gain passage of the Voting Rights Act of 1965, which provided enforcement of the right to vote for all citizens.

As president of Brown Publishing Company from 1920, he created a huge media company that lasted for 90 years. In 1918, at age 25, Brown was elected as the 36th Lieutenant Governor of Ohio, the youngest man to gain that post.

Brown was born in Blanchester, Clinton County, Ohio[1] or West Union, Clermont County, Ohio,[2] the son of Owen and Ellen Barerre (McCoppin) Brown. His middle name was "J" and did not stand for anything. He attended the Blanchester public schools, and then attended law school at Washington and Lee University, in Lexington, Virginia, from 1913 to 1915.

On his twenty-first birthday, Brown married Ethel McKinney. He worked as state statistician in 1915 and 1916 in the Ohio Secretary of State's office.

In 1921, at the height of the Ku Klux Klan's power in Ohio, Brown supported federal civil rights legislation to stop the lynching of African-Americans.[3] In 1938, prior to his first election as Representative, he was one of only 67 (of 870) candidates for Representative along with only 8 (out of 96) sitting Senators to pledge support to the NAACP for federal anti-lynching legislation, the legislative precursor to modern civil rights legislation.[4] In 1940, during debate of the anti-lynching bill he stated:

We hear much of the struggle throughout the world to maintain democracy. From the lips of those who oppose this measure comes... at other times... the loudest protestations of belief in democracy. Let me say, here and now, that if democracy is to continue to live throughout the world, and here in our beloved America, those of us who have the ability and power to do so must see to it that the full rights of the weak and defenseless are safeguarded against the violence and the intolerance of the strong and the mighty

Brown was elected in 1938 as a Republican to the Seventy-sixth and to the thirteen succeeding Congresses, serving from January 3, 1939 until his death in 1965. While in Congress, he was chairman of the Select Committee on Newsprint in the Eightieth Congress; he was a personal friend of Democrat Speaker of the House Sam Rayburn of Texas.

In the 1930s and 1940s, Brown staunchly opposed President Franklin D. Roosevelt's New Deal policies to expand the federal bureaucracy. He also opposed expanding US foreign military entanglements, until attack on Pearl Harbor. Following World War II, Brown warned against the continuation and expansion of foreign aid programs that were meant to be temporary. When Harry Truman became president, Brown opposed his Fair Deal, as corrupt cronyism through the expansion of federal bureaucracy.

Brown cosponsored legislation to create the Hoover Commission to study and reform the federal government and served on the commission, formally the Commission on the Organization of the Executive Branch of Government.

By the 1950s, Brown was the ranking minority member of the important Rules Committee in Congress. In the 1960s, he worked with its chairman, Democrat Howard W. Smith of Virginia, to block expansive federal legislation sought by presidents John F. Kennedy and Lyndon B. Johnson. Smith was a senior member of the Southern Block, established by white Democrats at the turn of the 20th century, when the former Confederate states disfranchised blacks. However, near the end of his life, Brown convinced the segregationist Smith to allow landmark civil rights legislation to reach the house floor for a vote.

He checked out of the hospital to help shepherd the Voting Rights Act of 1965 through Smith's Rules Committee, and he contributed to the achievements of the Civil Rights Movement.

Brown died at Bethesda Naval Hospital, Bethesda, Maryland on August 23, 1965. He was buried in the I.O.O.F. Cemetery, Blanchester, Ohio.

His son, Clarence J. "Bud" Brown Jr., won the special election in 1965 to fill his father's seat in Congress. His grandson is Clancy Brown, an actor, but he is not related to the film director of the same name.