Rees G. Richards was born July 22, 1842 near Swansea, Wales, and lived there until age 10. His family then moved to Ontario, Canada before removing to Tioga County, Pennsylvania.[2] 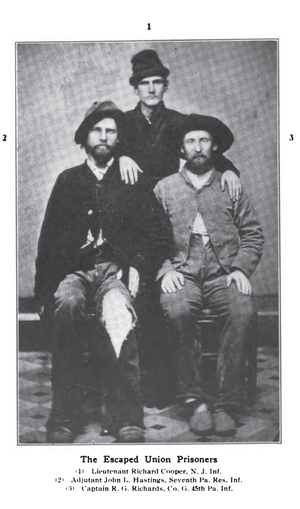 March 17, 1865. Shown on right with two others who escaped from Confederate POW camp.

After the war, he moved to Youngstown, Ohio and engaged in mercantile business for two years,[2][6] then six years in Irondale, Ohio. In 1873, and again in 1875, he was elected to represent Jefferson County, Ohio in the Ohio House of Representatives at the 61st and 62nd General Assemblies[7] In 1876 he was admitted to the bar.[6] He represented the 22nd district in the Ohio Senate in the 63rd and 64th General Assemblies (1878–1881).[8] In 1881, he defeated Democrat Edgar M. Johnson for election as Lieutenant Governor of Ohio, and could have had the nomination in 1883, had he wanted it.[2]

He was elected to two terms as Common Pleas Judge of Jefferson County while living in Steubenville, Ohio, starting in 1902, and died February 10, 1917.[6]

Richards married Catherine C. Rees of Tioga County, Pennsylvania on November 22, 1865, and Elizabeth Johnson of Jefferson County, Ohio on September 25, 1894, who had one daughter. Richards was a Freemason and a Presbyterian by faith. He was a member of the Grand Army of the Republic and the Military Order of the Loyal Legion of the United States.[9]