Othniel Looker (October 4, 1757 – July 23, 1845) was a Democratic-Republican politician from Ohio. He served briefly as the fifth Governor of Ohio.

Looker was born on Long Island, New York, and moved with his mother to Hanover Township, New Jersey when he was two years old after the death of his father.[1] He enlisted with the New Jersey militia in 1776 and served out the remainder of the Revolutionary War as a Private.

In 1779, Looker married Pamela Clark, and circa 1788 Looker moved to Vermont and then to New York, working as a school-teacher.[2]

While serving as Speaker of the Ohio Senate from 1813 to 1814, Looker was concurrently elevated to the governorship after Governor Return J. Meigs, Jr. resigned to become Postmaster General.[2] Looker sought re-election but was badly defeated by the far more well-known Thomas Worthington. He continued to live in Ohio until his wife's death, and later moved to Palestine, Illinois to be with his daughter Rachel Kitchell, and is buried there in Kitchell Cemetery. Looker was the Ohio Presidential elector in 1816 for James Monroe.[3] 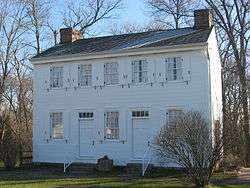