Thomas Welles Bartley (also known as Thomas W. Bartley) (February 11, 1812 – June 20, 1885) was a Democratic politician from the U.S. state of Ohio. He served as the 17th Governor of Ohio. Bartley was succeeded in office by his father, Mordecai Bartley, one of only a few instances of this occurring in high elected office in the United States.

When Wilson Shannon resigned as Governor on April 15, 1844, to take a diplomatic appointment as United States ambassador to Mexico, Bartley became Governor while concurrently remaining in the Senate. He served out the remainder of Shannon's term until December 3.[3] Bartley sought renomination under the Democratic Party, but lost at the state convention by a single vote - avoiding a contest against his father, who accepted the Whig nomination.[4] Bartley later served a contentious term on the Ohio State Supreme Court from 1852-1859. 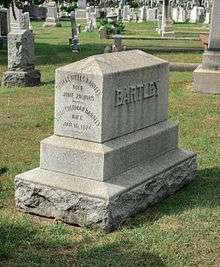 Bartley was buried at Glenwood Cemetery in Washington, D.C.[6]